Graham Rahal never envisioned a time when he’d be signing virtual autographs and racing other IndyCar drivers on a computer. But that’s part of his routine now, with the IndyCar season on hold because of the coronavirus pandemic.

“I really couldn’t imagine it until now,” said the veteran driver with Rahal Letterman Lanigan Racing. “It’s an interesting period for everybody. We can all learn a lot from this, just in the way we go about life, the way we go about our cleanliness.”

He also has joined the virtual racing gang, competing in the IndyCar iRacing Challenge series on a simulator in his home (the next race is today at 2:30 pm Eastern on NBCSN). He finished 14th in the opening race at Watkins Glen International after an early spin, and admitted he was a complete newbie. 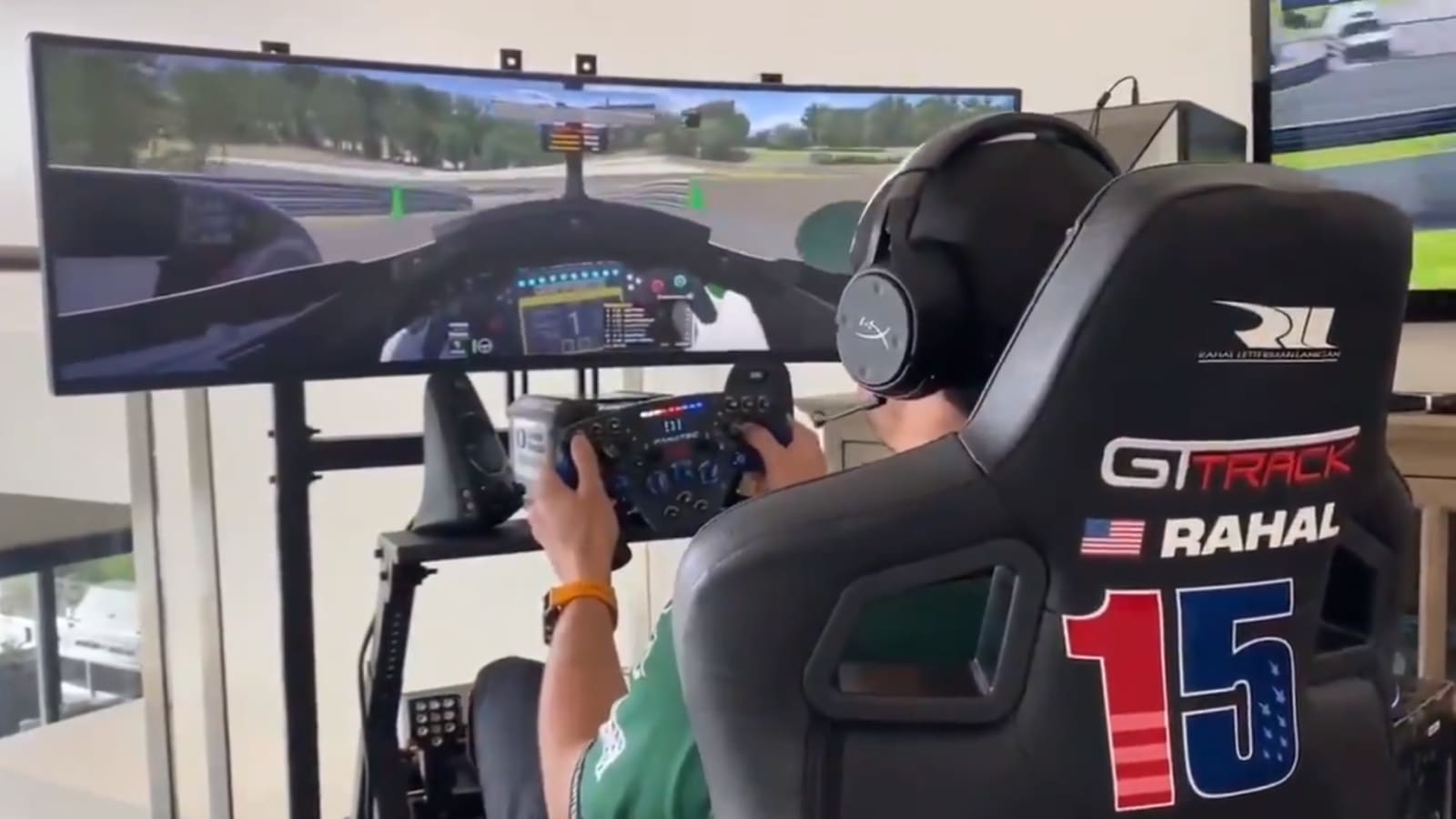 “I had run a little bit with Honda’s simulator, but really, I’d had no experience sim racing,” he said. “This is all very interesting to me. I find it funny and took it light-hearted – let’s go out there and play and have a good time. But there are people who take this very seriously, and there are guys who make a living doing this.”

He realized quickly that it takes plenty of seat time, just like real racing, to become competitive on a simulator.

“What I’m finding is that the learning curve isn’t the driving itself. The learning curve is the equipment and getting the equipment operating correctly,” Rahal said. “How do we get the steering wheel to work correctly with the settings that give the steering response that you want? How do we set the brake pedals, putting in the right pre-load spacers, which I haven’t even messed with yet? I struggled at Watkins Glen not knowing if I was going to lock the brakes or not stop enough. I couldn’t feel it. That sort of thing is really tricky. Guys who’ve spent a lot of time on this will have a clear advantage for the time being.” 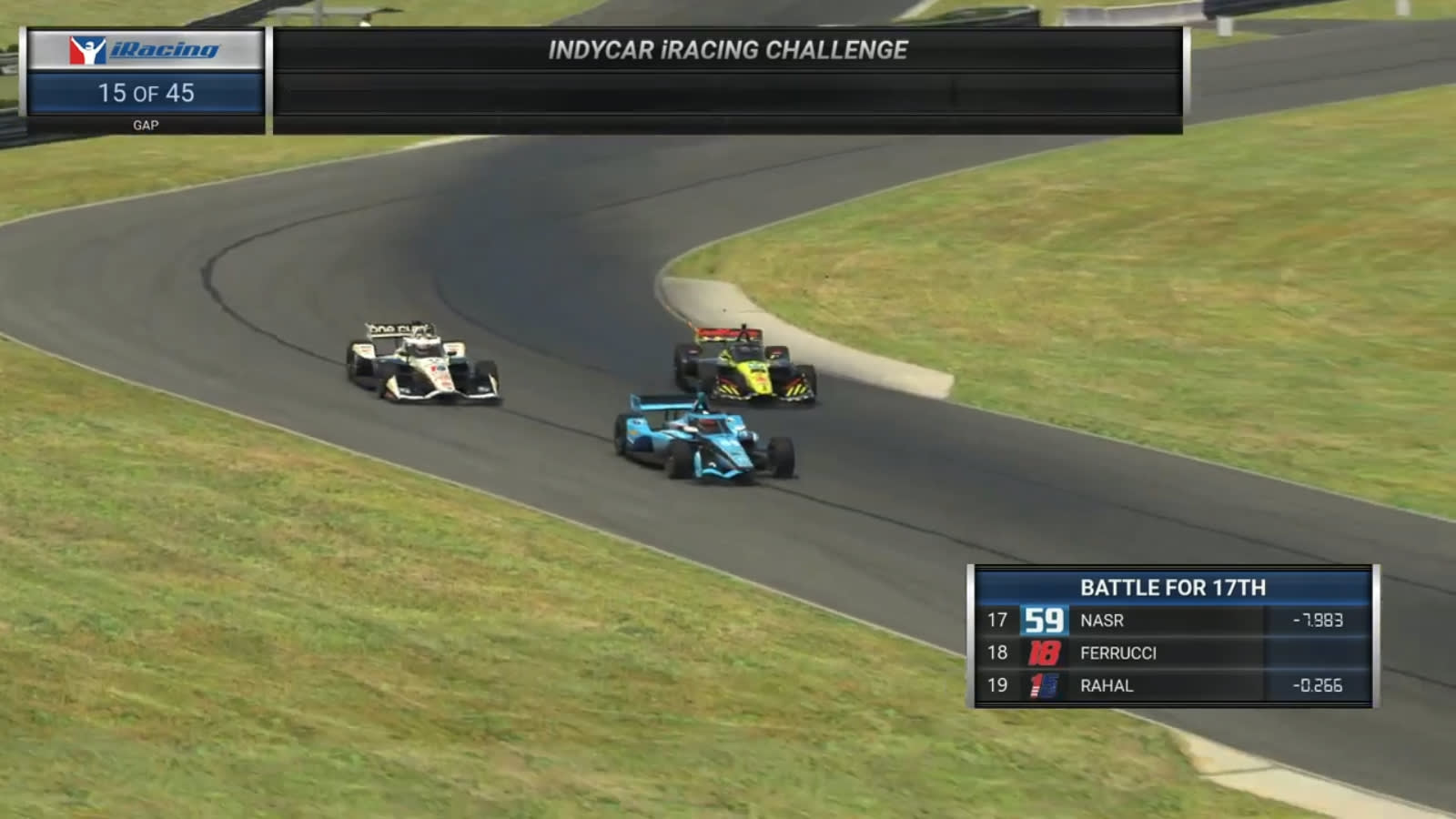 While sim racing doesn’t duplicate the g-forces and seat-of-the-pants sensation of driving the real thing, Rahal said there are some aspects that can help once he gets back to the race track.

“I had my engineer and my assistant engineer on the livestream talking to me as a spotter and doing strategy,” he said. “What I found very interesting is that it almost gave us a dress rehearsal and kept us sharp a little bit. I did some fuel saving at the end of the race trying to get a fuel number. Yeah, it’s different. But at the same time it gets your head and mind processing in a way that is similar to real racing. That’s actually pretty cool.”

With open communication between drivers during the simulated race, there can be as much sarcasm between friends as criticism. When Rahal qualified fastest for another IndyCar sim race on the World Wide Technology Raceway oval, more than one competitor chided that his wife, former drag racer Courtney Force-Rahal, must have been driving.

“Everybody always gives me crap about that, so I’m used to it,” he said. “But the stuff they say on the radio is pretty hilarious.”

Thank you @BrittanyForce for filling in for me during my bathroom break. She couldn’t really reach the pedals too well. I’m currently submitting @JD33Davison for anger management classes. https://t.co/RKvAhSe8W7

We talked to Rahal before the second IndyCar iRacing Challenge race that took place at virtual Barber Motorsports Park. Spoiler alert, but as you can watch in the video at the top of the page, he would finish 14th again. He qualified in the fifth row.

Rahal said many of the IndyCar drivers started practicing for the Barber race not long after last weekend’s race ended.

“I think (the racing will tighten) up, but I also think there are guys taking it more seriously than others. There are a lot of guys out there just looking to have some fun,” he said. “Do I want to win? Sure. But I’ll be very honest about what I’m out there to do. I’m really wanting to raise money for Turns for Troops.”

Rahal’s Turns for Troops program raises money throughout the real IndyCar season for SoldierStrong to aid the lives of military veterans. United Rentals, one of Rahal’s main sponsors, donates $50 for every lap he completes. Even with the IndyCar schedule on hold because of the pandemic, the donations continued in the first simulated race, raising $2,250.

“The competitive spirit inside wants you to go out there and beat everybody, but at the same time I am legit having a good laugh doing this all the time,” he said. “If we can raise some money for charity and keep that going, that’s far more valuable to me than anything else.”

The next IndyCar iRacing Challenge will be today (Saturday) from the virtual Michigan International Speedway and will be dubbed the Chevrolet 275. It airs on NBCSN at 2:30 pm eastern, but you’ll be able to eventually watch it on YouTube as well as the IndyCar iRacing Challenge website. There will then be three more races, including at a “Random Draw” track (April 18), at the virtual Circuit of The Americas (April 25) and at a non-INDYCAR “Dream” track (May 2). You can read more about the series in our interview with Sage Karam, who unlike Rahal, is a veteran of sim racing.