Climbing up into the big rig and settling in behind its massive steering wheel dials up childhood fantasies fueled by Hollywood. Just for a moment it’s the 1970s and we’re hauling a load of Coors from Texarkana to Atlanta. A black Trans Am running blocker. The CB crackles over the rattle of the truck’s enormous diesel. “Breaker One. Breaker One. This is the Bandit. Is the Snowman out there? Am I hittin’ ya, son?”

But there is no load of bootleg beer, no CB and no rattling diesel. This truck is powered by electricity. We’ve climbed up into the VNR Electric, the first zero emissions heavy duty freight transport from Volvo Trucks. The company, which sells its diesel trucks in 190 countries, unveiled the electric-powered rig last fall, and promises to put 23 on the roads of Southern California by the end of this year. Today there are five.

Volvo is on a hard push for EVs. Owned by Geely, a Chinese company, its new spinoff Polestar, which it calls an “electric performance brand,” is now building its first EV in China. The high-performance coupe is called the Polestar 1, and more models are on the way, including the four-door Polestar 2, which will rival the Tesla Model 3, and an SUV, probably called — you guessed it — the Polestar 3.

Now Volvo Trucks is beginning to crank out its electric big rigs at its factory in New River Valley, Virginia, where they’re built alongside its diesel-powered products. But the two efforts, and the two companies — Volvo Cars and Volvo Trucks — have little to do with one another. Volvo Trucks has been completely separate from the car company of the same name since Ford acquired Volvo Cars back in 1999. It was sold to Geely in 2010.

Volvo Trucks builds heavy-duty transport trucks for long-haul and regional use, but the company, which says it employs 12,000 engineers globally and spends $2.3 billion annually on research and development, also has an expansive line of zero-emissions products that range from electrically powered forklifts to 5,000 electric buses operating around the world, mostly in Europe.

According to Brett Pope, the director of electromobility for Volvo Trucks North America, the electric trucks reduce carbon dioxide production by 40-60% during their operational life compared to the company’s diesel trucks, and the goal is the same typical 15-year duty cycle. 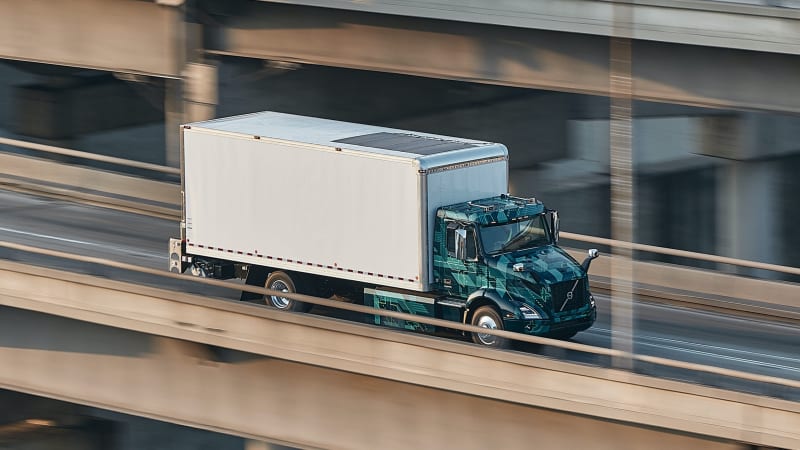 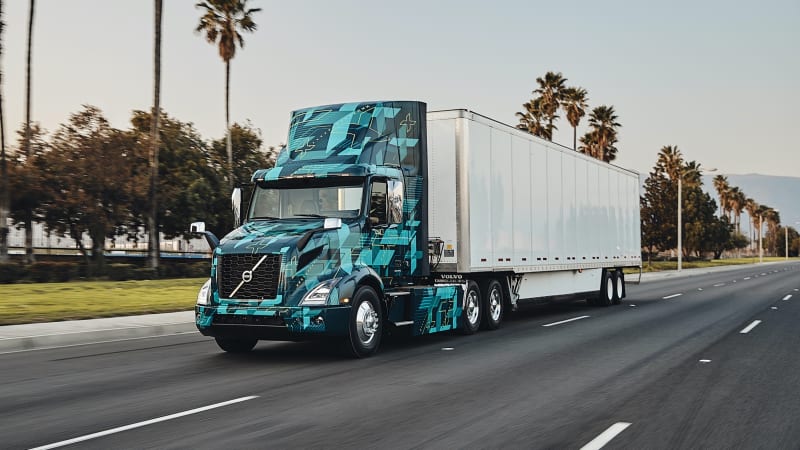 To create and facilitate the infrastructure needed to support these trucks, from charging to the training of technicians, Volvo’s Low Impact Green Heavy Transport Solutions (LIGHTS) program was launched in 2018, with 14 partners. The California Air Resources Board (CARB) is on board, along with Shell, two Southern California universities and Southern California Edison, one of the nation’s largest electric utilities.

Volvo has contributed $36.7 million to the $90 million program, while CARB has pitched in $44.8 million. It’s all managed by the South Coast Air Quality Management District, which regulates air pollution in the area and contributed $4 million from the Clean Fuels Fund. TEC Equipment, the largest Volvo Truck dealership in North America, has invested $800,000 in the program.

Located in the trucking hub of Fontana, California, right across the street from California Speedway, TEC’s two-year-old, 14-acre facility has become the unofficial ground zero of Volvo LIGHTS, along with the Port of Los Angeles in Long Beach, about 65 miles southeast. About 40% of all imports go through California’s ports, and nearly 20% of all containers moving through all U.S. ports come through Long Beach. Once those goods are loaded onto trucks, most pass through Fontana on their way across the U.S. 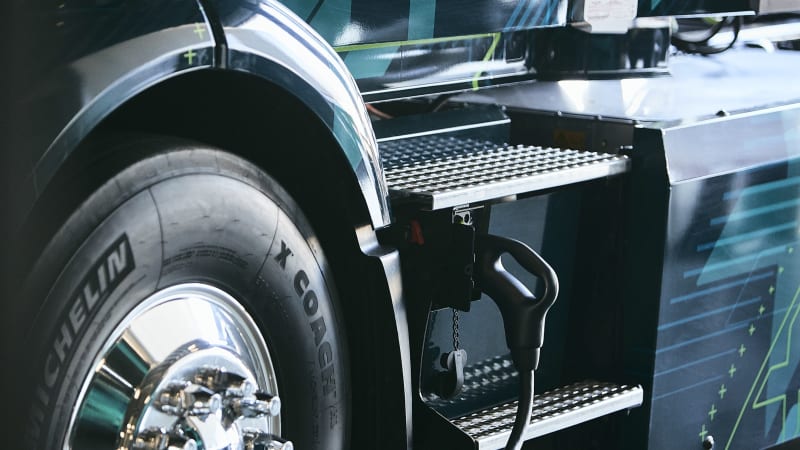 Volvo offers five different trucks, its VNL models are for long-haul duty, while its VNR or Volvo Normal Regional are for shorter local routes. Due to its range limitations of up to 175 miles, the electric powertrain’s availability is limited to the VNR model, and due to the lack of a charging infrastructure the trucks will stick to short hub-to-hub routes for the foreseeable future.

Normally, these trucks are powered by Volvo’s D11 or larger 13-liter D13 inline six-cylinder diesels. Both are turbocharged with common rail fuel injection, and backed by a 12-speed automated manual transmission with a single clutch and two-pedal operation. Many versions of the engines are offered, but the most powerful D13 makes 500 horsepower at about 1,500 rpm and 1,850 pound-feet of torque at about 1,300 rpm.

The VNR Electric is offered with four or six 66-kWh battery packs. Each weighs 1,146 pounds and measures nearly six feet long, over two feet wide and almost a foot deep. Cased in aluminum structures surrounded by steel for impact safety, two are mounted on each side of the truck within the wheelbase, basically replacing the truck’s saddle style fuel tanks. The other two are located higher behind the cab. With the six battery packs aboard, there’s a total power storage capacity of 396 kWh, but Volvo limits the usable power to 300 kWh to extend battery life.

Volvo mounts the “modular power box” under the truck’s hood, housing the DC-DC voltage converters, coolant pumps, heaters, junction boxes, fuse blocks and other necessary hardware, along with a conventional radiator, right where you would expect. The heating and cooling system is continuously monitoring and manipulating the temperature of the batteries, which is ideal at 77 degrees Fahrenheit.

Between the frame rails, mounted low beneath the rear of the cab, are two electric motors that spin up to 10,000 rpm and produce over 500 horsepower. In that space is also a two-speed automatic transmission, designed by Volvo, and geared extremely low, with a 9.5:1 first gear and a 3.5:1 second. Volvo also replaces the diesel’s 2.49 rear-axle gears with a radically shorter 5.38:1 ratio, and with all that torque multiplication, the VNR Electric puts more to the ground — 23,601 pound-feet of wheel torque vs. 20,652 on the diesel.

To keep production as uncomplicated as possible, Volvo hasn’t modified the VNR’s steel chassis, air bag suspension or other components. However, all subsystems are now electric including the power steering, and higher load tires are required to handle the additional weight. The VNR Electric weighs 24,000 pounds with six battery packs on board; that’s 8,000 pounds more than the diesel truck dry. It’s also better balanced, with less weight mounted over its front tires, and its center of gravity is lower.

Disc brakes, which are optional on a conventional VNR, are lighter than the drums and use less air. They’re standard on the VNR Electric and feature adjustable regeneration with four settings. Volvo says the system can extend the truck’s range by 25%.

A couple of laps around the infield road course at California Speedway is all we get, and the VNR Electric is like driving the world’s tallest and heaviest Tesla. Its operation is silent, as expected, with just a slight whir from the motors under acceleration. Volvo says its cab is six decibels quieter than the diesel-powered truck.

There’s a push button shifter on the dash, but first you have to release the air pressure from the brakes. Channeling my inner Snowman, I reach up and push the big yellow button just to the right of its simple analog gauge cluster. The truck delivers the desired high-pitched whoosh.

Throttle response is immediate off the line, but the power levels off once the transmission upshifts to second between 10 and 20 mph. You don’t feel the gear change, however. There’s no reverse gear, instead Volvo reverses the spin of the electric motors. Throttle control is exceptional. The truck is easy to creep, which should make it easy to drive in tight spaces.

The dual-axle truck is equipped with six battery packs, but there’s no trailer hitched up, making it easy to maneuver the big rig through the corners. The suspension is well damped, and the steering has a stratifying heft, but it’s painfully slow, forcing you to continuously shuffle your hands on its big steering wheel.

It accelerates smoothly but with little zeal. With a rolling start it manages just 55 miles per hour down the track’s eighth-mile-long back straight. “I thought it would feel faster,” I say to the Volvo engineer sitting in the passenger seat.

“Really?” he says. “It pulls away from the diesels easily.”

On the second lap, I play with the regeneration levels of its braking system. This is manipulated with a steering column stalk, so it’s easy to change on the fly. In the two most intense settings you can basically drive with one pedal as the brakes slow the truck rapidly when you lift off the gas. The response of the system isn’t as immediate as in some electric cars, however. There’s a beat before the truck begins to slow.

“The regen system is also tied into the automated collision braking system,” says our copilot.

A diesel-powered VNR costs between $100,000 and $125,000. The VNR Electric will cost considerably more. Volvo hasn’t released pricing, but admits that convincing the trucking industry to give the new technology a chance will have its challenges. Financial hurdles aren’t just the costs of the trucks themselves, but also the price of infrastructure development. “We will need support with incentives to help adoption,” says Lars Stenqvist, chief technology officer for Volvo.

“We’re just starting in California,” adds an upbeat Pope. “We’ll move to new regions when we’re prepared and expand routes as the infrastructure improves.” In the meantime, the first VNR Electrics are on the road, and Volvo says the trucks have a payload of over 42,000 pounds and a gross combined weight of 82,000 pounds starting on an 8% grade.

How much does a trailer filled with 400 cases of Coors weigh?