In September, Cyan Racing, the famed Volvo race shop that turned the 850 Wagon into a Super Touring machine, unveiled its gorgeous resto-mod P1800. Then, the focus was on the classic skin hiding a modern drivetrain powered by 420-horse, 355 lb-ft, turbocharged Volvo 2.0-liter inline-four. Now Cyan has revealed what that engine and the P1800 Cyan’s interior will look like.

Like the body, which has been widened and its greenhouse repositioned, the cabin isn’t an exact replica of the original. Cyan calls it an interpretation, but there are several cues that evoke Carrozzeria Ghia’s 1961 design. For one, the instrumentation features a large chrome-rimmed tach and speedometer on either side of thin, vertical gauges monitoring water and oil temperature. Three auxiliary gauges to the right of the main pod mimic the original’s fuel, oil pressure, and clock.

Likewise, the door panels feature simple inserts with a horizontal line pattern, though now they’re punctuated with massive speaker grilles. But while the general form of the dashboard and door panels hearken back to the 1960s, even down to the dash-mounted rearview mirror, light-quelling modern materials give the interior a cave-like vibe that seems to contrast the original’s airiness. 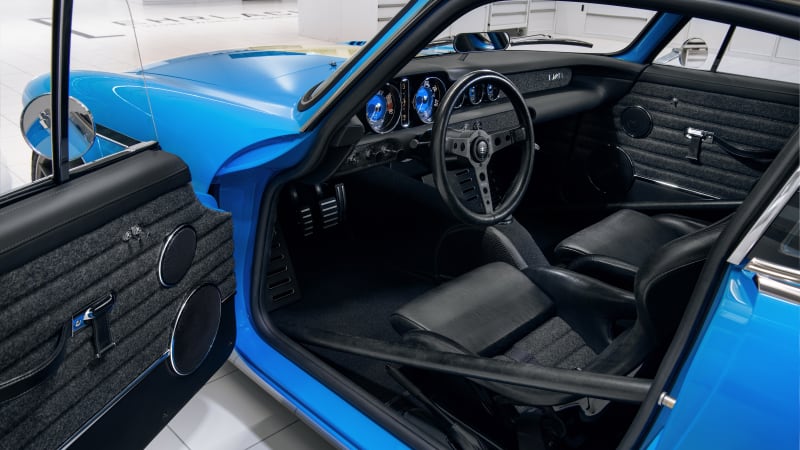 Cyan says their goal wasn’t to shove modernity into a classic body, but rather to provide an analog driving experience as well. Thus, the P1800 has no ABS, traction or traction control. However, the steering rack is freshened with a rack and pinion box, and the suspension upgraded with aluminum arms and a fully independent setup engineered by Cyan.

Given the success of its race cars, that suspension design is certainly light years ahead of the old solid axle. Cyan, known as Polestar before Volvo completely bought the brand to spin-off into its own performance marque, will build these for clients, and has told Autoblog the price of entry is around $500,000.