In the past two weeks everything has turned upside down for Uber and Lyft drivers.

In the first week of March, the Ridester team released our official 2020 RIDES Survey, which measured driver earnings and satisfaction. The survey revealed that drivers were earning significantly more than they did the year before. It was the first time in many years that driver earnings had improved, and it looked like things were taking a turn for the better for drivers.

We released that survey on March 6. About 10 days later, cities around the nation began initiating lockdowns to try and stop the spread of the novel coronavirus and COVID-19. Suddenly rideshare business came to a shrieking halt.

I was originally going to offer advice and tips here to rideshare drivers on how to make the best of this bad situation and keep earning. However, things have changed so rapidly that I am now convinced the best, and in fact, only thing drivers can do is stop driving.

You should stop driving first and foremost for your health. This pandemic is real, and it is serious. It is quite contagious and spreading like wildfire. The last thing any driver needs is to be cooped up in a small enclosed compartment like a car with 15 to 20 random strangers a day.

Just coming into close contact with that many different people a day puts you at enormous risk. Social distancing is all but impossible in a car — it’s not feasible to stay the recommended six feet away from your passengers in a normal-size vehicle. It’s almost the perfect conditions for promoting the spread of COVID-19.

But if you’re determined to drive anyway because you just really need the money, it’s likely that you’re going to be disappointed because a lot of the business is gone. I know this because we just completed a new COVID-19 rideshare survey where we asked drivers questions about how they were faring in a post-coronavirus world. Here are the results.

Driver income is down by at least 80%

In a stunning turnaround from our previous survey, completed just a couple of weeks earlier, drivers went from doing better than they had in years to basically being put out of business.

If you’re a driver who has been negatively impacted by this crisis — rest assured, you’re not alone. Every driver is in the same boat.

The main sources for rideshare business have all been shut down. They include:

In this era of city-wide lockdowns, the daily commute to and from work is all but dead. Only “essential” workers are allowed to go to and from work anymore. We estimate that’s about 10 percent of the workforce. So that’s 90 percent of a rideshare driver’s morning and afternoon commute business — gone. If you made $80 a day in commute business, you could expect to make about $8 now — if that. It’s hardly worth the health risk.

Airports make up about one third of a rideshare driver’s business. Airports have been all but completely shut down, with only trickle of business. Planes are still in the air, but they’re flying empty. Airlines are “struggling to fill even 15% of their seats,” according to USA Today.

Probably the most natural thing in the world for drivers, who are dependent on rideshare for their income, is to turn to deliveries. There is very little friction for Uber rideshare drivers who want to pivot to doing Uber Eats deliveries.

A third of drivers told us in our recent survey that they simply will not do deliveries. But 56% told us they were either already doing deliveries, have just signed up to do deliveries or are thinking about it. 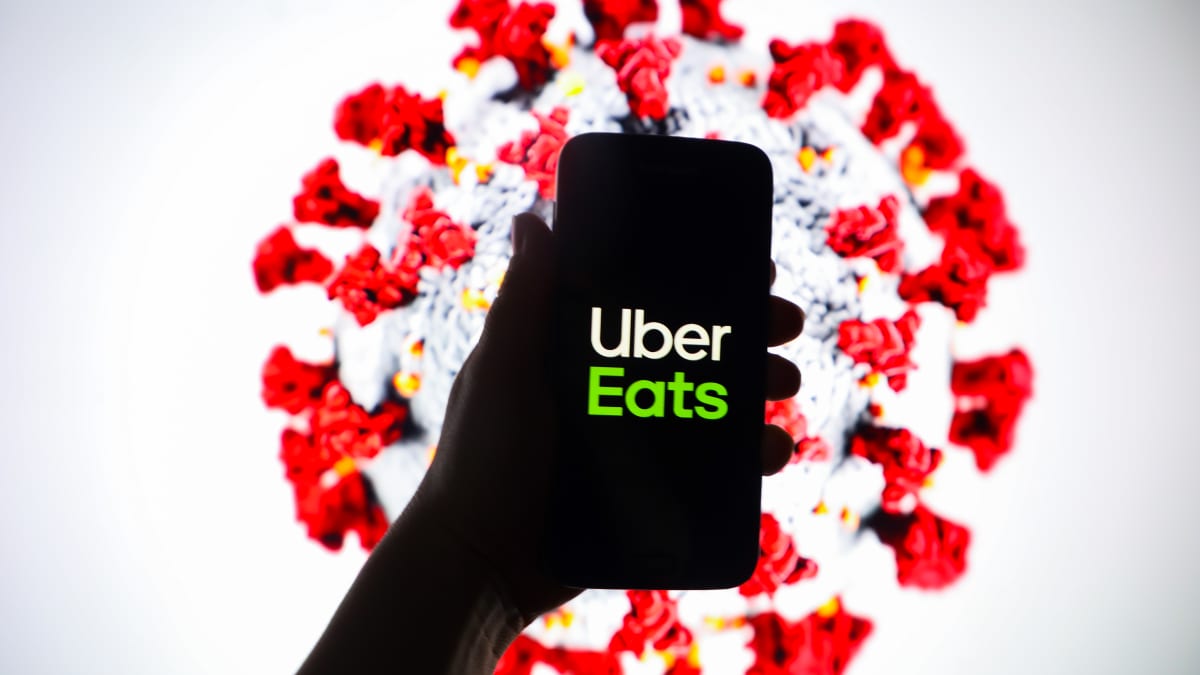 Why deliveries won’t pan out

These responses bring up at least a couple of potential problems for all delivery drivers regardless of when they started, either before or after this pandemic. The problem is if 56% of rideshare drivers start doing deliveries, then it’s really going to cut down on the business any single driver gets. Instead of having two or three other drivers waiting for each request that comes through, you might end up with 15 or 20 drivers waiting in line for the same request. That, of course, means that each driver will get less business.

Another potential problem is that while more drivers than ever are pouring into the delivery system, fewer customers are ordering. It seems counterintuitive as you would think more people would be ordering deliveries because they’re not supposed to go out.

But people can still shop at grocery stores and make food at home, which is a much cheaper alternative than buying delivered food from restaurants. A lot of people are not ordering deliveries because they too have lost their jobs and want to save as much money as possible right now.

At the same time that more drivers are coming onto the system, many customers are dropping off. What could have been a relatively smooth transition for drivers into another way of earning a living with their cars will not work out as well as we would have hoped.

Another big question on the minds of many rideshare drivers is how safe the delivery business is in light of the coronavirus. It is clearly safer than driving passengers around, but it too comes with its own set of dangers.

Delivery drivers often have to walk into the restaurant to pick up the customer’s order. This involves possible close contact with employees of the restaurant as well as customers. If you walked into a restaurant for a food pickup once a week, it would probably be no problem. But if you’re doing it several times a day, each time your risk increases.

Many drivers are also worried about getting the virus from touching the food packaging, and this is a legitimate worry. Studies are out showing that coronavirus can remain infectious on cardboard and paper for up to 24 hours. This means drivers should use a variety of techniques to stay safe while touching the bags and boxes the food is delivered in.

However, many of those techniques involve the use of products that are no longer available in stores. For instance, a driver might wish to wear sterile surgical gloves in the course of his work, but he can’t because it’s nearly impossible to buy them anywhere. If he already had some on hand, though, he could use those, but best practices would suggest that you should change to a new pair of gloves with each new customer. If a driver does 15 deliveries a day, he’d need at least 15 pairs of gloves — each day.

One of the things that has amazed me in talking to other drivers is how few of them mentioned government assistance as a last resort when contemplating their options. Their first thoughts were about other kinds of work they could do. They’re willing to work. They want to work. They don’t want to be on any kind of government assistance. But this is one of those times that even people who don’t want any help from government might be well-advised to take it.

The newly-passed stimulus bill has provisions that provide assistance to independent contractors, which includes Uber and Lyft drivers. The federal government will send $600 a week for up to four months on top of whatever your state’s unemployment payment is. The stimulus package also makes it possible for state governments to pay unemployment insurance to independent contractors — for the first time.

Unemployment insurance plus the $600 weekly payment from the federal government should go a long way in helping rideshare drivers stay afloat while the entire economy is shut down.

However, there’s one little hitch. This has all happened so quickly that the states have not been able to update their rules, procedures and websites fast enough to keep up. If you go online to apply for unemployment insurance, you will most likely be faced with a questionnaire that will ask you who your “employer” was. But Uber and Lyft aren’t your employers. You’re an independent contractor. So, technically you can’t answer that question. But if you leave it blank, the website will reject your application before you’re even able to submit it for human review.

And speaking of those human reviews, it seems like most states would have to hire half of their citizens just to review the unemployment applications. There have been 10 million unemployment claims made in just the last two weeks. No state is set up to handle that kind of onslaught. Even though the money is technically and legally yours, there is no telling how long it might take before you can get your hands on it.

This is indeed a rare and unusual situation. It is one of those times where just about every way you turn, there seems to be no solution.

My top recommendations for rideshare drivers right now are:

And remember, you’re not in this alone. We’re all in this together. This is affecting everybody. If you’re sitting alone at home in a panic, just know you’re not the only one. Give somebody a call and keep up as much human contact as you can (just not the physical kind).

But most of all, stay in! That is the only way we can beat this thing. We’re all going to have to suffer a great deal for a couple of months, but if we stay in, we can start to resume our normal lives after that. If we don’t, it will continue on and on and be far worse than a two-month nationwide hibernation.