Being able to customize every aspect of the driving experience via a simple and quick touchscreen interface probably sounded like a pipe dream not too long ago. Being one tap away from a stiffer suspension and grabbier brakes sounds a lot easier than spending a weekend on the garage floor swapping in new shocks and better brake pads. Or just living with a car you don’t particularly like driving until the lease runs out.

Yet we find ourselves constantly complaining about how complex modern cars are. Just make the damn thing right to begin with, right? I can’t even begin to count the number of times I’ve heard words like those come out of enthusiasts’ mouths. I’m guilty of holding this sentiment myself, having grown up driving cars from the 1990s without a single drive mode switch in sight. Those were simpler days.

Now we have vehicles like the 2020 BMW X5 M Competition, a ridiculously quick performance crossover that is loaded to the gills with drive modes and customization options. It’s so complex, you basically need to set aside a few quality days with the owner’s manual. To see what I mean, here’s a quick video guide so that we’re all on the same page.

Got it? Maybe? It’s a steep learning curve, but let’s dive into how all of this improves and detracts from the BMW M driving experience — the X5 M Competition is a full-on M car after all. I’ll go through each of the different drive customizations separately, since BMW allows you to set them all independent from one another.

Engine: This one largely changes how the throttle responds to your jabbing. I’m super pleased with the throttle tuning in “Efficient.” BMW didn’t neuter it entirely, which seems like a wise choice for a 617-horsepower crossover rated for 15 mpg combined, according to the EPA. You’re never going to be very efficient anyway. Three engine settings seem unnecessary, though. Sport Plus is great for feeling all those horses instantly — I found myself skipping over the mid-level Sport mode with no reason to use it. After all, I’m either casually cruising, or I’m trying to have a bit of fun. At no point did I think to myself, I only want to have a modicum level of throttle response. If the Efficient mode was punishingly drab (in some cars it is), then the medium Sport mode would be appreciated. However, Efficient mode is smart and will even recognize when you want to drive quickly and adapt, so as not to spoil the fun.

Chassis: This one is my favorite adjustment to make in most cars. However, the BMW X5 M Competition is punishingly stiff for a crossover from the get-go. Sure, “Competition” is in the name, but taking this gigantic beast to a track day still sounds mad. Even in Comfort, this crossover rides uncomfortably hard. There is little give in the suspension, and undulating roads just make me grimace while being tossed about. Yet, BMW manages to find a way to make the ride even harsher in Sport and Sport Plus. Frankly, anything beyond Comfort is best left for a racetrack. It would’ve been great to see BMW dial it back enough to make this crossover livable on a day-to-day basis like the X5 M50i.

The benefit? This car refuses to lean or wallow in any suspension mode, and it’s sharp as a tack in both Sport and Sport Plus. Too bad my commute isn’t on the Nurburgring. Normally, one of the best parts of extreme customization like this is the ability to soften the ride up while retaining snappy and sharp performance everywhere else. This big, fast crossover seems a perfect candidate for that kind of tuning, but the breadth of suspension adjustment just isn’t there.

Steering: BMW keeps it simple here. The Comfort steering setting is lighter and easier for casual driving than the Sport setting. Though, I was perfectly happy to cruise around in Sport, too. The differences here are noticeable, effective and worthwhile. Sport isn’t artificially heavy or cumbersome, and even if you come upon some winding road when in Comfort, the car doesn’t ever feel inept or out of sorts. You feel the weight of the car through the steering, for better or worse.

Brake: Adjustable brakes are going to become increasingly prevalent as more brands turn to brake-by-wire systems. This X5 M Competition is equipped with that intriguing technology, and it’s allowed engineers to give the driver more control over how the brake pedal feels. We were slightly deterred by the super-touchy Giulia Quadrifoglio and Stelvio Quadrifoglio brakes. BMW’s system isn’t nearly as noticeable or obvious as Alfa Romeo’s is. Comfort mode offers a pretty typical, soft and luxurious pedal feel. Switching it to Sport doesn’t make for a rock-hard supercar-like pedal, but it does become stiffer and more effective in enthusiastic driving. In fact, I prefer driving around in Sport all of the time. Coming to a stop smoothly is easy no matter the mode, and they never feel grabby like Alfa’s brakes do.

M xDrive: Without a doubt, switching into 4WD Sport (activated with TCS button) is the best way to quickly and easily have fun in the X5 M Competition. It activates M Dynamic Mode, which sends more power rearward, relaxes the stability control and makes this crossover feel more like a rear-wheel drive sports sedan under power. For the road, it’s spot-on, giving you just enough leash to let the animal out without letting it get too out of sorts. The standard “4WD” mode isn’t devoid of fun, but BMW did us all right by making this crossover as fun as it is in 4WD Sport.

Once you figure out the combination of modes that you like, it’s easy to set the car up that way with one button press each time you go for a drive. BMW has used its M1 and M2 customization buttons on the steering wheel for a while now in M products, but here’s the latest iteration in video form for you to observe. Without them, I’d likely be cursing the sheer number of modes you have to wade through to make this car drive the way I want it to on a daily basis. With them, it’s livable, and I can deal with the digital complexity. Just bring the owner’s manual along on your first few drives. 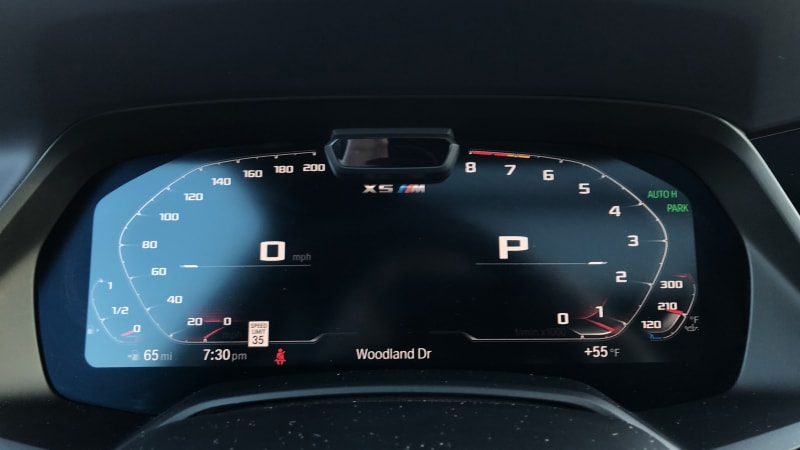 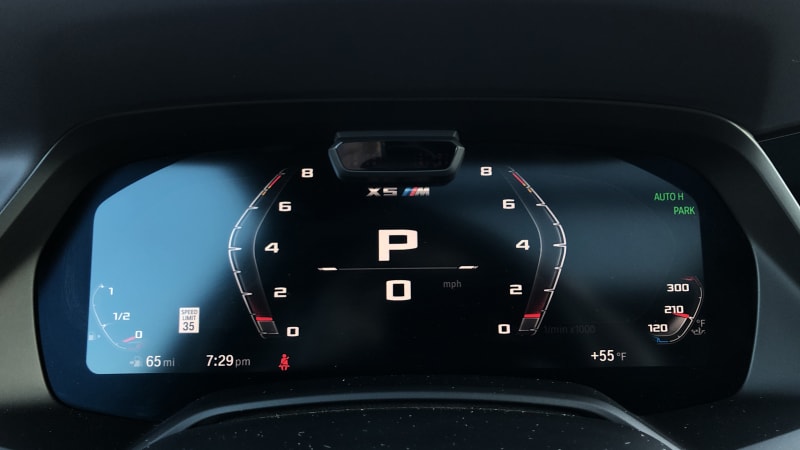 The X5 M also has three driving display modes to choose from. Road is my favorite for most situations — it’s the most traditional of gauge layouts with a speedometer on the left and a tachometer on the right — but Sport and Track have some benefits, too. My main issue with Sport and Track is the orientation and style of the tachometer. The instrument cluster sprouts two(!) vertical tachometers when you throw it into Sport or Track mode, and it’s tough to read where the revs are as you approach redline. Thankfully, BMW includes a huge and helpful tachometer with shift lights in the head-up display. I only discovered it when I removed my polarized sunglasses, though; a typical issue with head-up displays.

Swapping through modes labeled Road, Sport and Track might make you think they adjust all the driving setup options we discussed previously, but they don’t. Those are still done separately, because all of this just wasn’t complex enough.