We cover all kinds of mobility at Autoblog, not always just cars, and this weekend we’re noting the 30th anniversary of one of the landmark laws of our age, the Americans with Disabilities Act (ADA). President George H.W. Bush signed the ADA on July 26, 1990. Years later, he himself became disabled with Parkinson’s disease. At some point in our lives, many of us will confront a disability and will benefit from the sweeping changes and rights secured by the ADA, but unlike Bush, disability can sometimes strike when we’re young. As it did to my wife.

Alicia’s ability to walk has degenerated. At first, she used a cane, then trekking poles, then a “rollator,” one of those walker-like frames with wheels. But she was losing the ability to use even those. About two years ago, we reluctantly and grimly started shopping for wheelchairs.

Now, if you haven’t known many disabled people, you might assume that walking is a binary situation: Either you can walk, or you can’t. When a cane isn’t enough, your next stop is a wheelchair (and you’ll never get back out, or so I feared). That was our uninformed sense of things. Obviously a wheelchair is exactly right for many. But we soon realized the world is full of people with balance problems or neurological diseases — MS, Parkinson’s and many others — that rob them of their ability to walk despite the fact they are otherwise strong and capable and in some sense able to use their legs.

There just had to be a solution for these people. But it wasn’t apparent. The ADA has provided 30 years of heightened awareness about disabilities, but at first, second and third glance, the options in the marketplace seemed to be few: mobility scooter or wheelchair, take your pick.

The more we looked, the madder and more determined we got. Some online vendors of scooters and wheelchairs seemed, well, a bit shady. I recall one outfit that had a staggering “restocking fee” of hundreds of dollars if you returned their mail-order wheelchair. And the prices were staggering, too.

Brick-and-mortar options were also limited. A test drive in a store proved that mobility scooters were a no-go. They were expensive and far too heavy for her to load in the back of an SUV, and hoisting the damn thing would be the only exercise it offered. And a mobility scooter is no performance vehicle — infuriatingly slow, not much range. She dreaded the idea of plodding along on that. It was a hard no.

I got my hopes up when I discovered the Honda Uni-Cub, a self-balancing device that might’ve been just the ticket. Autoblog had written about the Uni-Cub for years in development, and had even ridden it. It was sort of like a sitting version of a Segway. But reaching out to Honda, I learned that the Uni-Cub was never brought to market. Honda, if you’re listening, this could help a lot of people. Other automakers, likewise.

After many frustrating weeks, we stumbled upon a TED talk by a woman named Barbara Alink. Barbara’s mother had spotted seniors using a rollator and commented, “Over my dead body will I ever use one of those!” She felt there was a stigma to it; in Barbara’s talk, she points out that, by definition, users of traditional devices are looked down on, literally and perhaps figuratively. So she designed a clever device she dubbed the Alinker, not just with her mum in mind but for people exactly like my wife. The Alinker is the grown-up equivalent of a toddler’s push bike — you sit astride it and propel it with your feet. It has three wheels for stability. It folds in the middle, is rugged yet light enough to lift into a car, and the wheels quick-disconnect to make it even more compact. It’s built from bike components, so swapping out a seat or a tire or tube is easy. It sounded exactly right.

As luck would have it, Barbara’s company was just up the road from us, near Vancouver, B.C. We went up for a test drive, and bought an Alinker. And it has been life-changing. It provides exercise and keeps Alicia moving. Because it allows her to sit upright and face people eye-to-eye, it offers that sense of dignity that Barbara’s mum had found so lacking in the alternatives. It frees her hands, unlike a rollator. Best of all, Alicia’s back in action: On level ground, she can pedal the Alinker as fast as I can walk alongside.

It comes in one color, bright yellow, that’s attention-getting. People seem to think it’s cool. On every outing (back when people went on outings), someone comments on the Alinker or asks how to get one. We’ve likely indirectly sold a few. Once in a while you’ll get someone who says, “That looks like fun!” and I politely explain that it’s actually mobility device, just in case they actually think she’s doing this for fun. Fun would be walking. This is just the next best thing. As I sometimes tell them, it beats the alternatives.

A side gripe: Once you’re out and about, you discover just how many abled pedestrians will cut off or cut ahead of a person who can’t walk, as if you’re just an obstacle, a piece of furniture. And you discover that some stores and restaurants don’t keep their aisles cleared to the ADA minimum width of 36 inches (the Alinker’s track is 30 inches). But the vast majority of people and places are accommodating and kind.

A few months after buying our Alinker, actress Selma Blair walked the red carpet with a cane at the 2019 Academy Awards. That appearance and her struggles with MS landed her on the cover of People magazine, which did a sidebar on her Alinker.

Despite all the attention, when out in public we’ve never encountered another person using an Alinker or anything like it. I hope, for the sake of those who need it, that changes.

Like other mobility devices, the Alinker’s not cheap. It’s $1,977. And at the time we bought it, insurance wasn’t paying out on it, though here’s hoping that’s changed by now.

On the other hand, that’s a bargain price for freedom.

Her other ride is even cooler

The other mobility solution we found, for recreation, is a tadpole trike. Alicia’s trike is from Catrike, below, but there are other brands such as TerraTrike. Hers has 30 gears, and though she can’t balance a traditional bike, she can pedal this machine almost as fast as other casual cyclists. She has even trained the dog to trot alongside. And when she was sad about not being able to walk the beach on vacation last year, I fitted her trike with fat knobby tires and turned it into a dune buggy. Vacation saved. 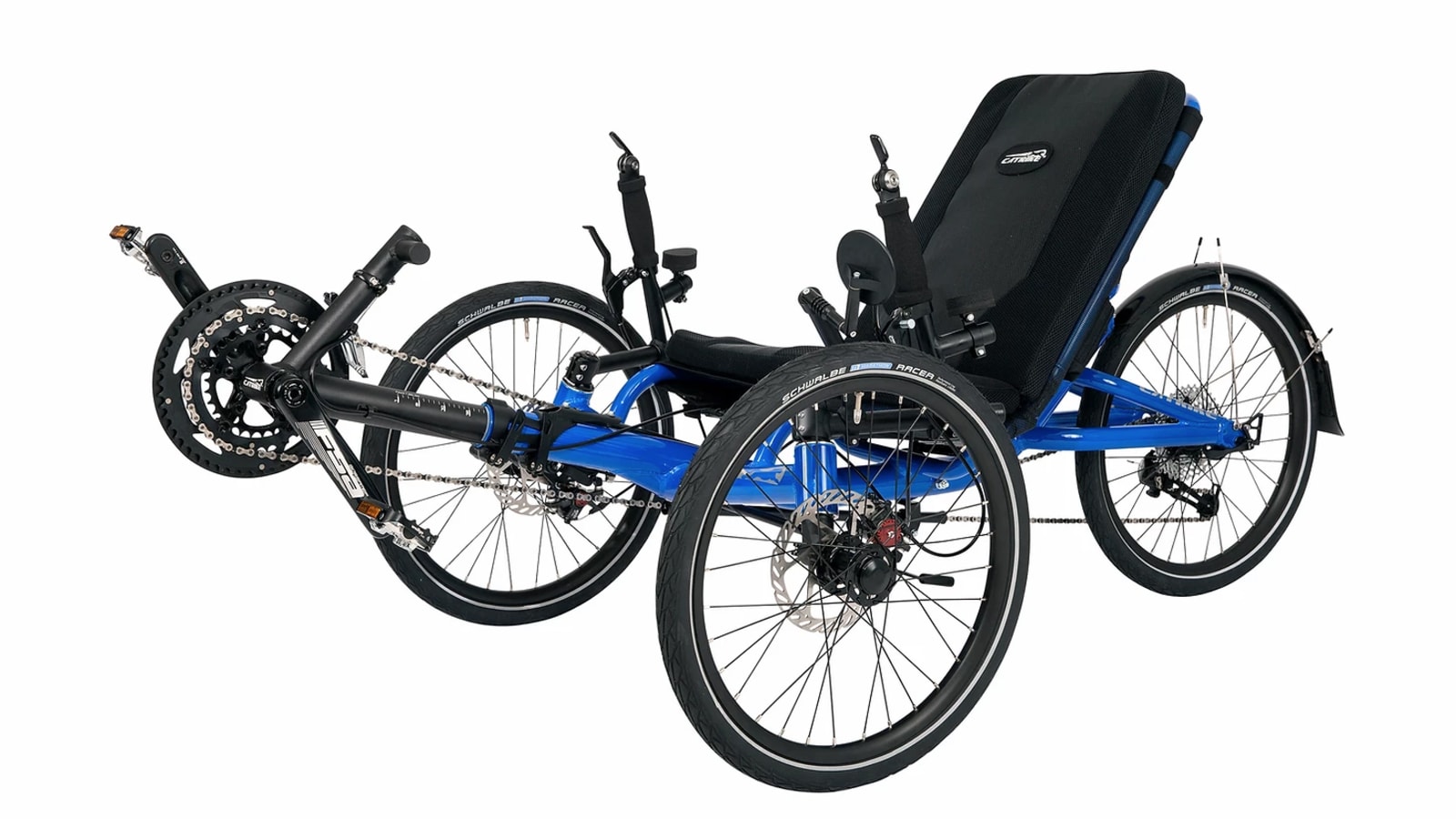 The Catrike isn’t cheap either, at $2,550 MSRP. But you see secondhand trikes once in a while on Craigslist. And it’s a great example of how to dream up a mobility solution all on your own.

In that vein, I’d love to find her an electric ATV for quiet exploration of woods and trails. None of the big names such as Honda, Yamaha and
Suzuki offered one, last I checked, though
Polaris has a side-by-side EV. There are some small players, but just like the auto business, it’s tough to be a startup, and some haven’t survived. Also, ATVs are shockingly expensive. But we’re seeing a flood of electric scooters and bikes hitting the market, so an ATV or other personal electric all-terrain solution may be out there already — like the Alinker, just waiting to be found.
There is cutting-edge work being done, at places such as
Chicago’s world-leading Shirley Ryan Ability Lab, on mobility solutions for people with all levels of disability. Thirty years after the ADA, it feels like the marketplace is just now catching up, so we’re hopeful for more choices in the future. If you need a mobility machne, look hard and look long, and don’t settle for anything that’s not right for your level of disability. We’re thankful for the solutions we’ve discovered. And getting back to the hook for this whole thing, we’re thankful for the ADA.