ESTORIL, Portugal — Estoril’s front straight is over half a mile long, and by the start/finish line the 2021 Porsche 718 Cayman GTS 4.0 is begging for fifth gear. At 7,800 rpm, its rev limiter interrupts the howl of its 4.0-liter flat-six. At 145 mph I give it the gear change, going back to full throttle as quickly and smoothly as possible, before jumping on its massive ceramic brakes and grabbing downshifts. This multi-limb dance proves that everything about this car – its clutch action, shifter, steering and brakes – works with a sublime, linear precision. But it’s the 718’s balance that impresses the most. The mid-engine sports car enters the course’s first turn cleanly, with just a touch of understeer, and exits the downhill second gear right-hander in a slight drift, which I’m able to carry out to the curbing.

It’s our third lap around the former home of the Portuguese Grand Prix and the Cayman feels right at home on the wide, 2.7-mile-long circuit, which includes several double apex corners, a tight uphill chicane and a third-gear 100-mph kink that the GTS takes foot-to-the-floor flat. Not once does the Cayman feel darty, twitchy or skiddish.

And it’s the same story out in the real world. Earlier we spent a few hours driving the 2021 Porsche 718 Boxster GTS 4.0 on the twisty coastal roads near the circuit, and returned equally impressed with its comfort, drivability and response. 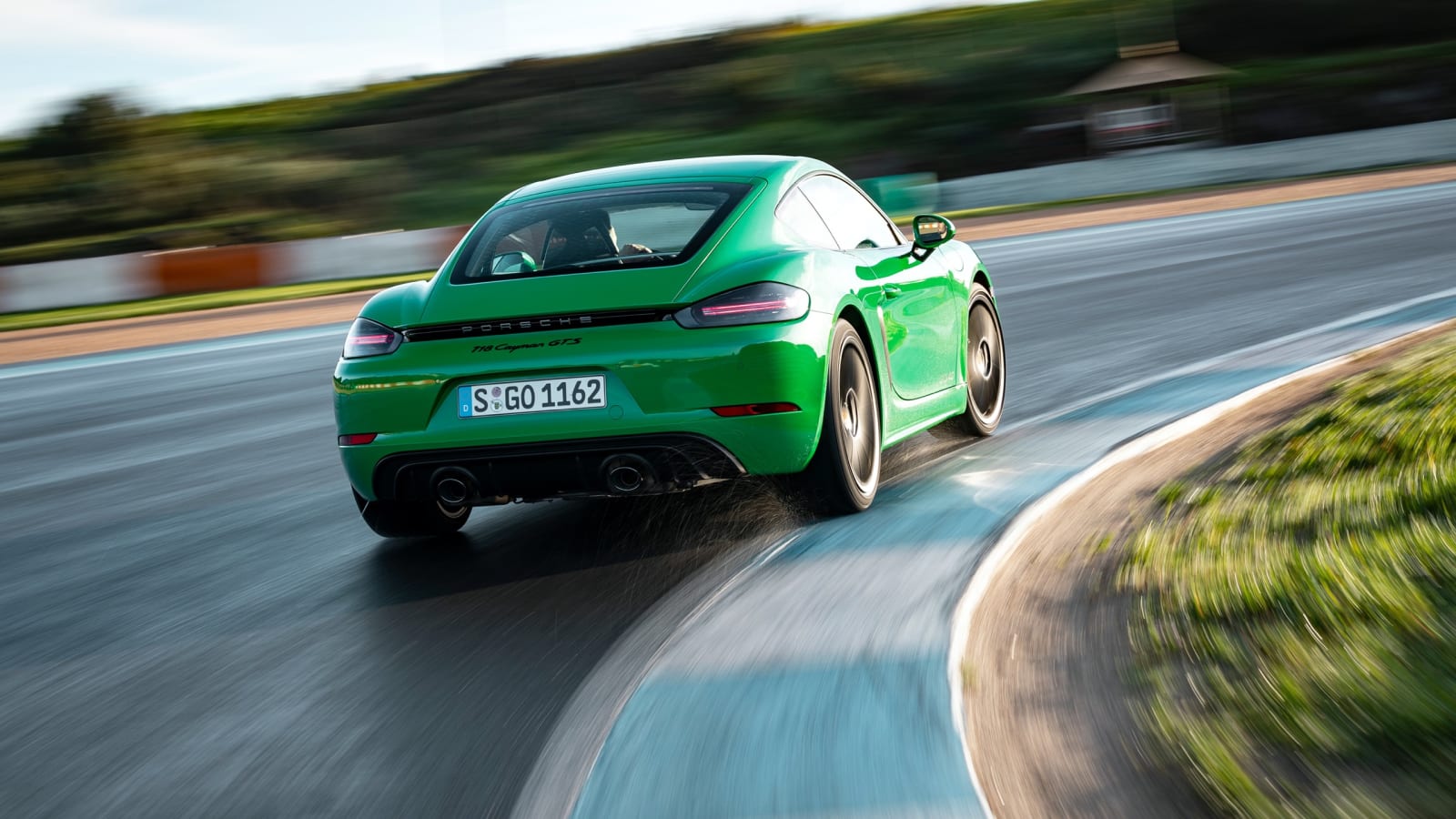 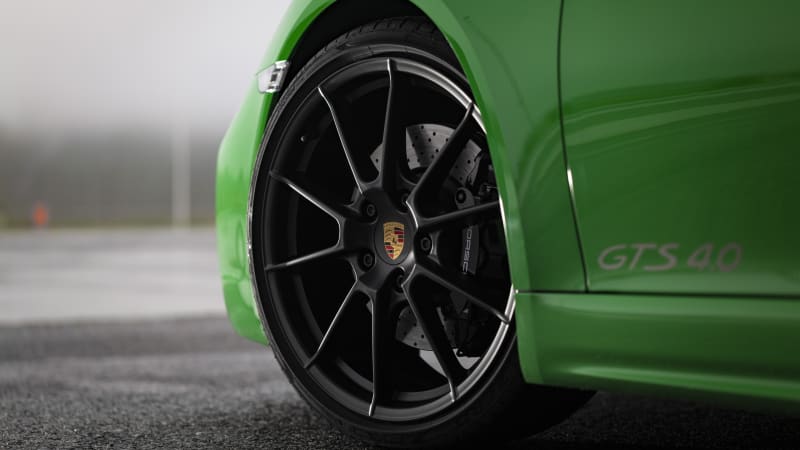 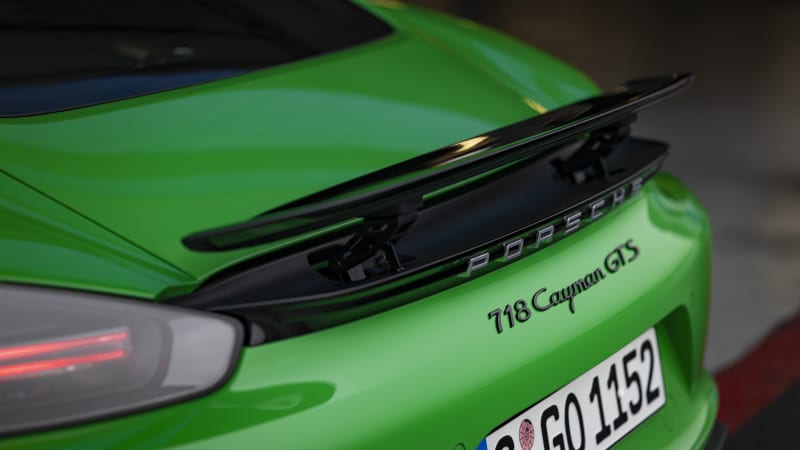 GTS stands for Gran Turismo Sport, and the three letters have proliferated through the brand’s lineup over the years, offering increased performance combined with daily livability. Since 2007 there have also been GTS versions of the 911, Cayenne, Panamera and Macan.

Mechanical twins, the new Cayman GTS 4.0 and Boxster GTS 4.0 borrow bits from the Cayman GT4, 718 Spyder and 911 GT3. They slot just above the Cayman S and Boxster S models and should cost right around $90,000, although final pricing will be released in the summer.

Like the 911 GT3 RS, they’re powered by a naturally aspirated, horizontally opposed six-cylinder, the same found in the 718 Spyder and Cayman GT4. It weighs 22 pounds more than the turbocharged 2.5-liter four-cylinder used from 2018-2019, but makes considerably more power. It’s also a better sports car engine, revving higher and quicker.

It isn’t a detuned version of the engine used in the 911 GT3 or GT3 RS, however. That 4.0-liter was deemed too exotic and too expensive for the 718, plus packaging its external dry sump oiling system in the mid-engine car was an issue. Instead, it’s a bored and stroked version of the turbocharged 3.0-liter flat-six found in lesser 911s. 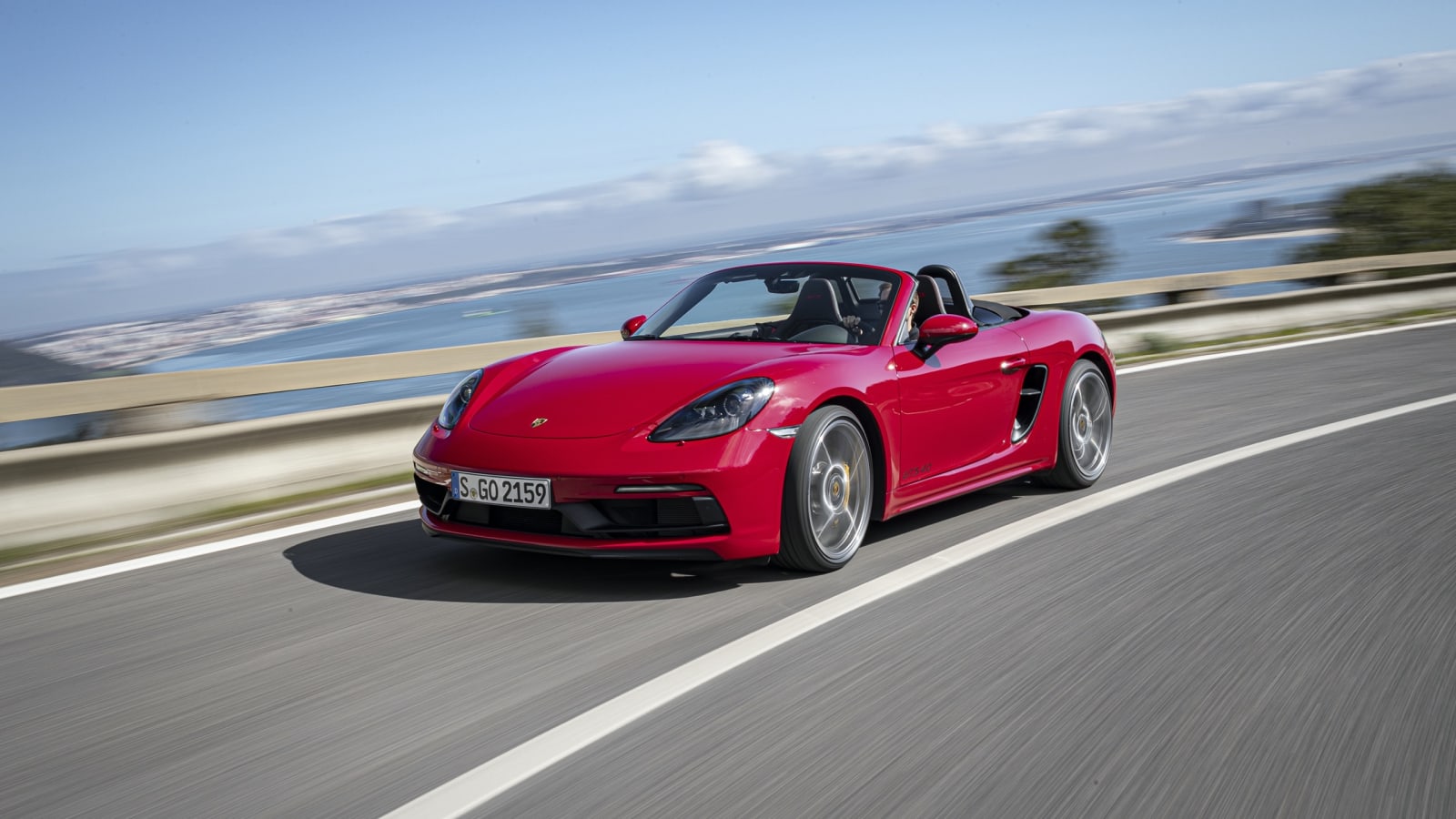 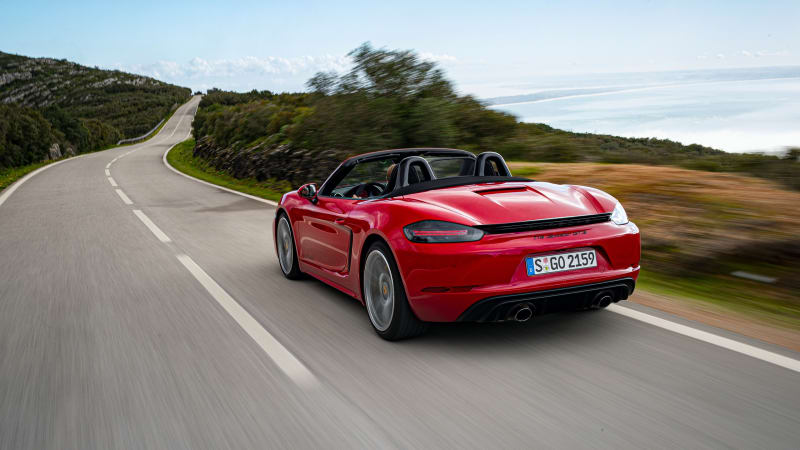 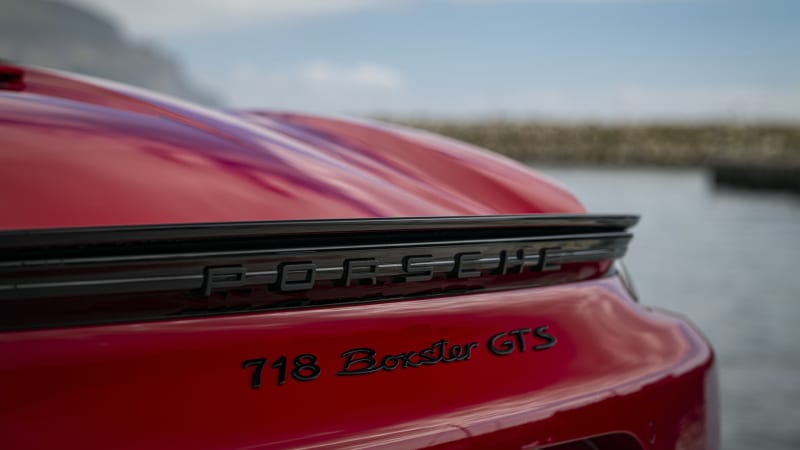 In the GTS, the engine’s peak horsepower is reported at 7,000 rpm, not 7,600 rpm where it is recorded in the GT4 and Spyder. Plus, the two engines make the same torque. Out on the road, power doesn’t seem to diminish over 7,000 rpm. In fact, the 4.0-liter continues to pull strongly. Hmmmmm.

Either way, those stats suggest a peaky engine with little bottom-end torque, but the GTS draws cleanly off idle in third gear, so it’s easy to drive around town. Throttle response is also impressive and there’s a satisfying mechanical whirl from the 4.0-liter and a guttural growl above 5,000 rpm. This is partially due to the two resonance flaps in the intake manifold that open to add plenum volume and deliver more air into the combustion chambers. A small valve opens first at 4,600 rpm and then closes when the larger valve opens at 5,000 rpm. Both flaps are open above 7,000 rpm.

The six-cylinder idles with an entertaining BRRRRRRRR, but it doesn’t drone despite spinning above 3,000 rpm in top gear at 80 mph. On the highway, to reduce fuel consumption and emissions, one of the engine’s cylinder banks shuts down. There’s a catalytic converter for each bank, so the computer alternates the inactivity from one side of the engine to the other so the cats retain the heat they need to work. Everything operates with silken smoothness. 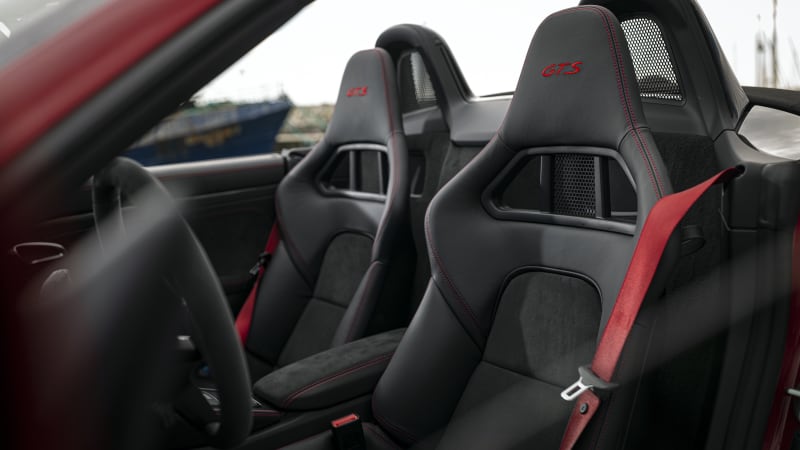 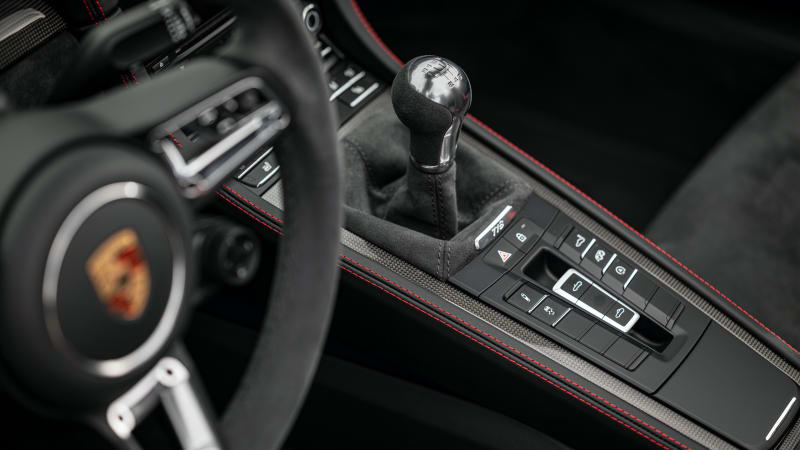 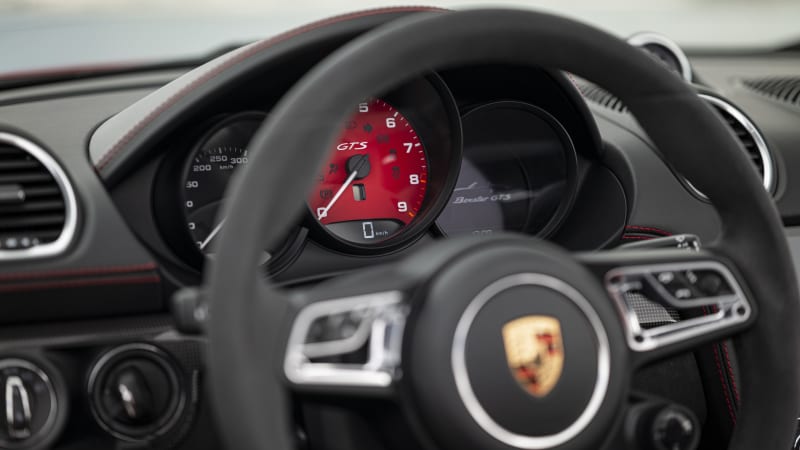 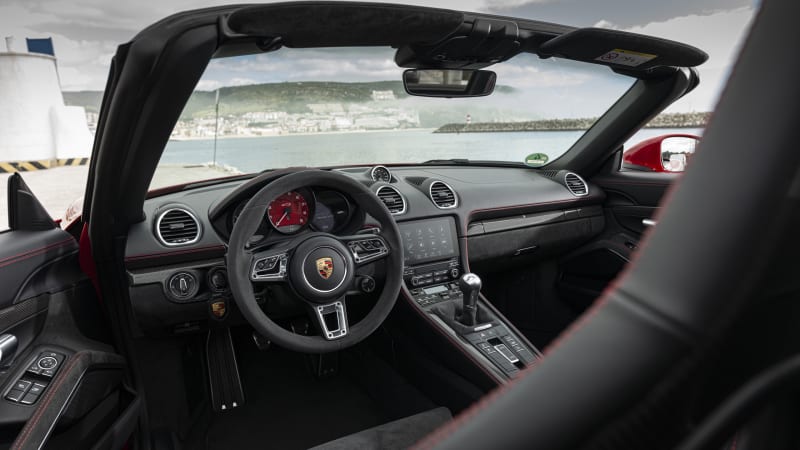 A six-speed manual is the only transmission. It’s mounted with Porsche’s clever liquid-filled Active Drivetrain Mounts (PADM), which reduce vibration around town but firm up for more visceral feedback when you’re driving hard. The GTS also uses a dual-mass flywheel from the 911 GT3 to further reduce reverberation. Like the GT4, the GTS models gets Porsche Torque Vectoring (PTV), which improves cornering with selective application of the rear brakes, and a mechanical limited-slip differential.

There’s no launch control, not with the manual, but Porsche says the GTS, which weighs about 3,160 lbs, can hit 60 mph in 4.3 seconds and cover the quarter mile in 12.5 seconds. That’s just a tenth slower than the GT4 and the Spyder, which weigh about 40 lbs more. Porsche also claims a Nurburgring lap of 7:40, which is the same as the turbocharged 2019 model. It’s also 12 seconds slower than the GT4 and 10 seconds slower than Chevy’s C8 Corvette. At 7:25, the new 911 S with PDK smokes them all.

As it does in the GT4, the drivetrain matches revs for you, so there’s no need to heel and toe on the downshifts. Rev-matching is active by default in Sport and Sport Plus, but can be switched off by deactivating PSM. If you don’t want to shift for yourself, wait a year, as PDK is coming for 2022. This is predictable since 80% of 718s sold in the U.S.A. are PDK and the number is over 90% in Europe.

Although the Boxster’s body is stiffer than a 911 convertible’s, the Cayman, with its closed roof, is considerably more rigid. It also has a slightly different balance with 44/56-percent weight distribution compared to the Boxster’s 45/55. Despite those differences, the two GTS models get the exact same suspension setups. Sport Suspension with Porsche Active Suspension Management (PASM) is standard and lowers the car 0.75 inch compared to the standard suspension on a 718 S model. The GT4 and Spyder are dropped another 0.4 inch. 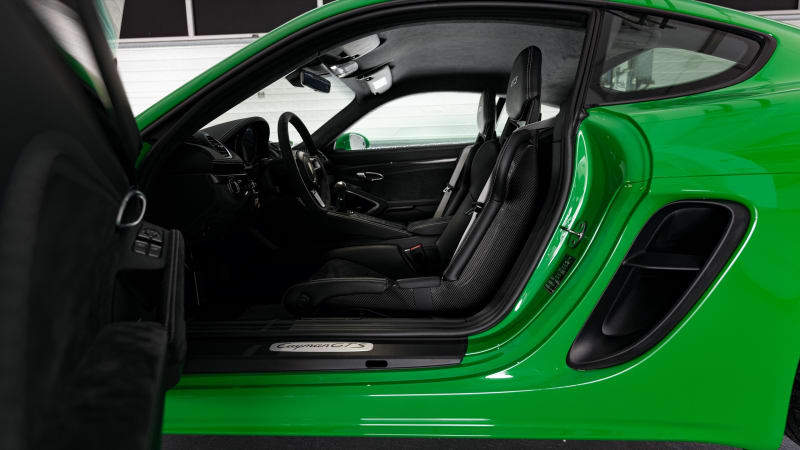 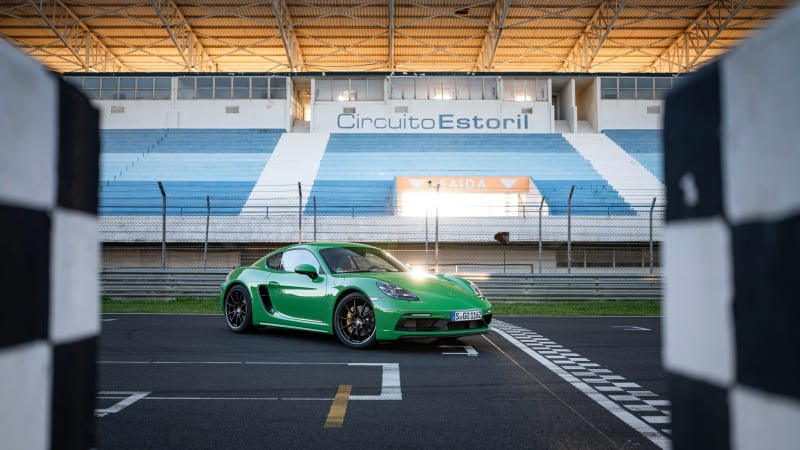 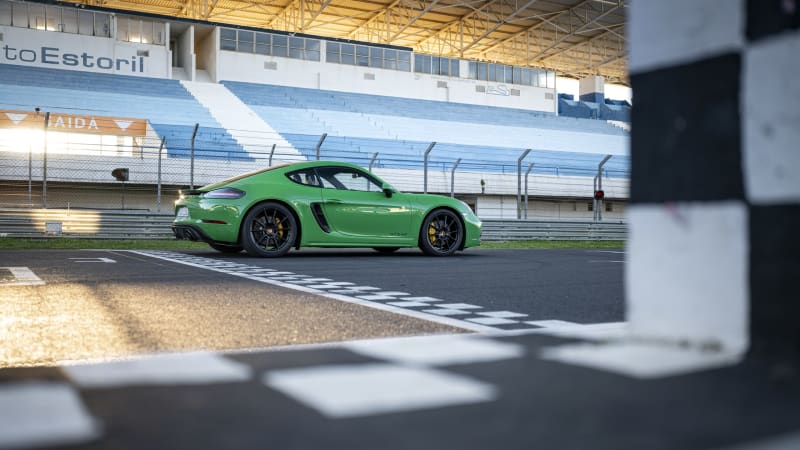 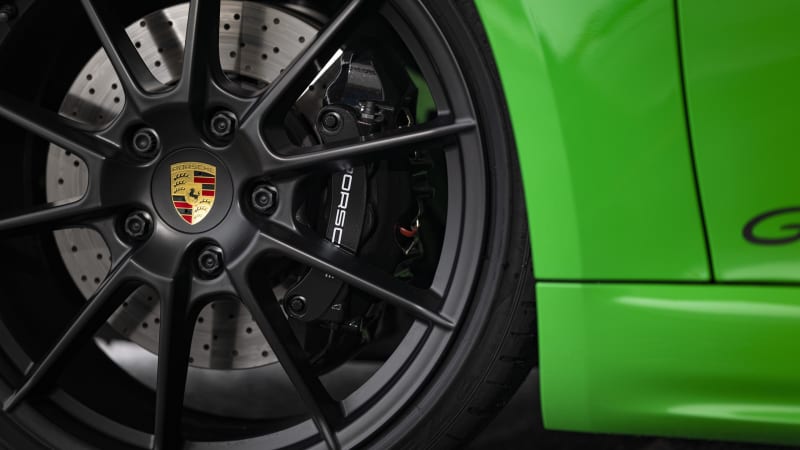 Spring rates and damping rates are increased about 5% over the S, but remain about 20% softer than the GT4s. Its bushings also remain rubber, while the GT4’s are stiffer urethane, and its damping rates are adjusted constantly and independently at all four wheels.

The result is a shockingly smooth ride, with no wasted motion in the suspension, but it doesn’t have a brittle feel either. Pirelli P Zeros sized 235/35R20 front and 265/35R20 rear are standard. If you want an even smoother ride there’s an optional suspension that lowers the car less than 0.5 inch, with slightly less aggressive spring rates.

Then there are the Porsche’s brakes. Cross-drilled and steel, its rotors measure a massive 13.8-inch front with six-piston front calipers and 13-inches in the rear with four-piston units. The optional ceramic rotors measure 13.8-inch front and rear, but weigh about 50% less. They feature yellow calipers, cost over $8,000 and delivered a firm consistent pedal, even after four hard laps. 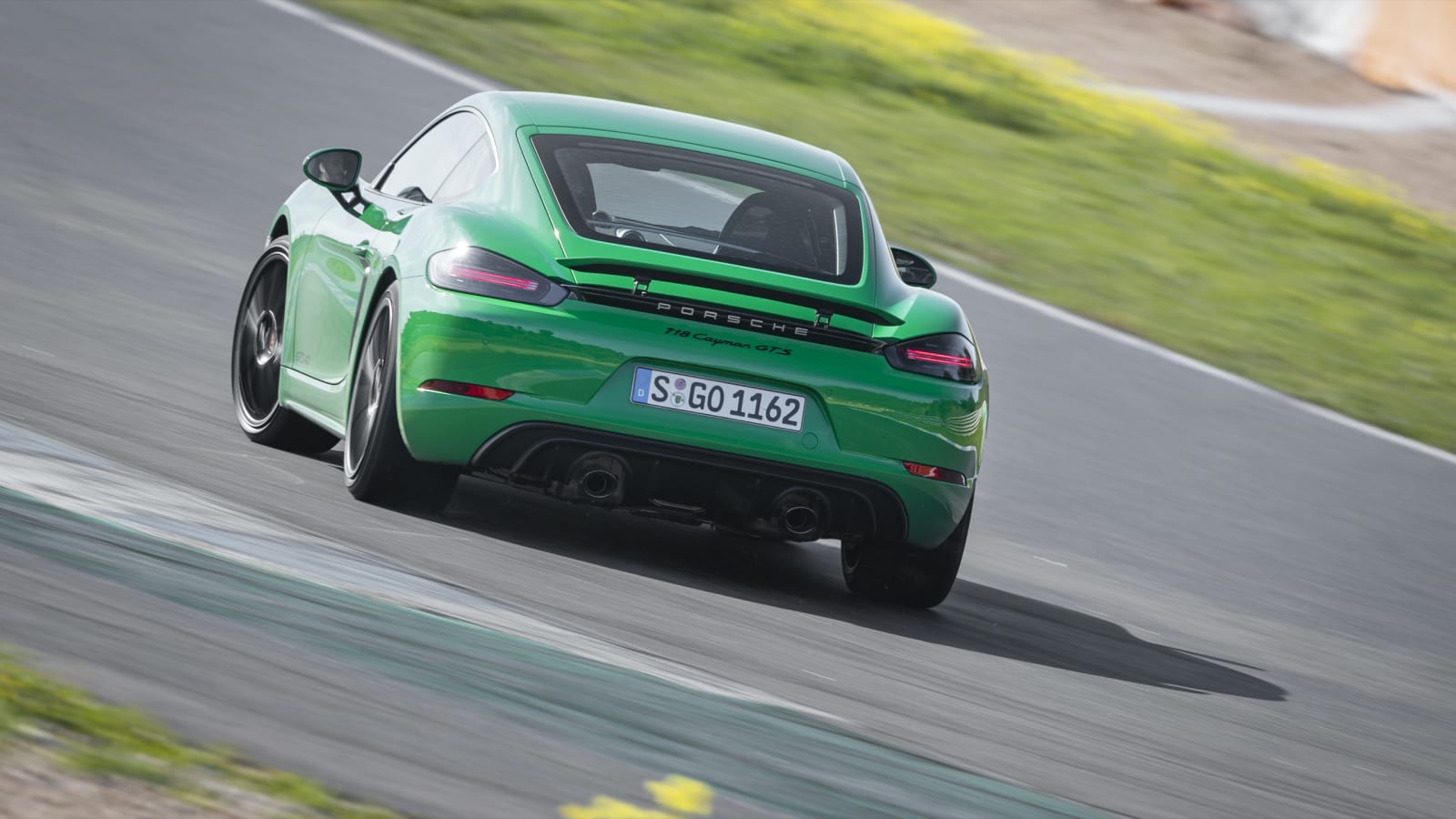 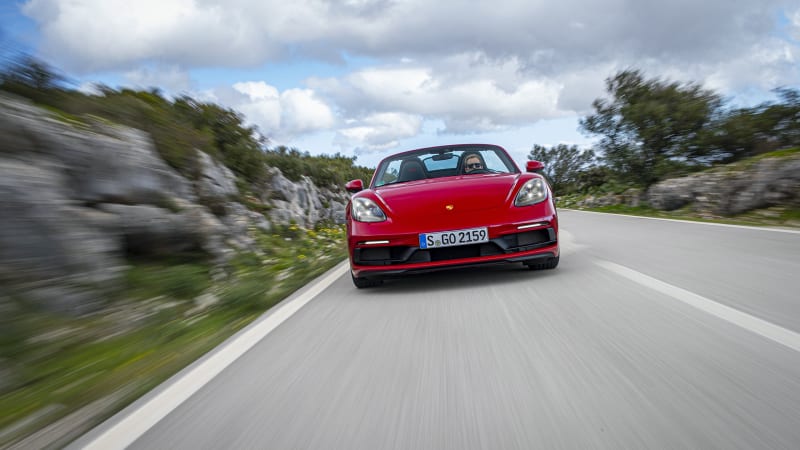 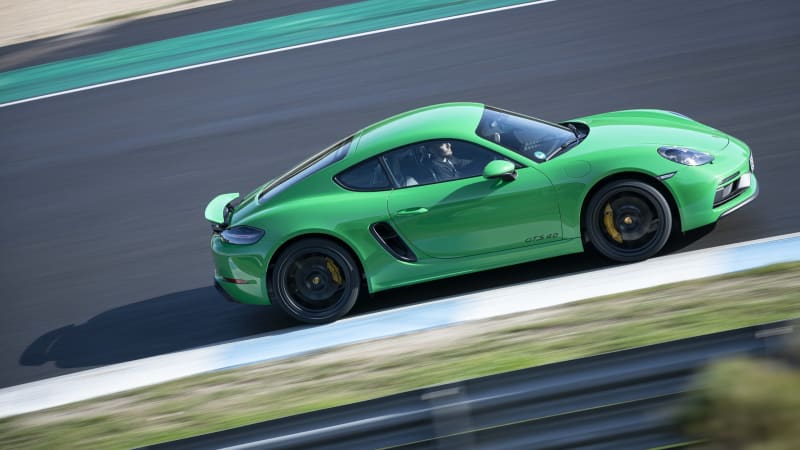 There’s less to note about the aesthetics. GTS models always get the blackout treatment. Here Porsche has added Satin black wheels, the Sport Design front fascia with blacked out air intakes and tinted headlights and taillights. There’s also a GTS 4.0 sticker on each door. The rear view is more distinctive, with a redesigned lower rear fascia – black of course, with about a foot between its tailpipes. On the more pedestrian 718 models, the pipes are squeezed together like the barrels of a shotgun. Inside there’s the usual Alcantara-covered steering wheel and shifter, and a smattering of carbon fiber trim.

Complaints? Two. The engine’s start/stop function could be smoother. Also, the optional carbon fiber seats are perfect for the track, but too hard for everyday use. Moreover, you’ll get tired of climbing over their bolsters. Unfortunately, the standard seats don’t have quite enough bolstering for track duty. Porsche should offer something in between.

Porsche will start taking orders in the summer, but the first batch of cars won’t reach the states until the end of the year, maybe even early 2021. Get in line. Offering more power, speed and visceral thrills than their predecessors, the new 718 Boxster GTS 4.0 and 718 Cayman GTS 4.0 are unquestionably the best GTS version of the Boxster/Cayman that Porsche has ever cooked up.