PARK CITY, Utah – The next-generation Camry was in the bag, on-sale, and receiving positive reviews. High-fives, team. The new car was wildly improved, having adopted Toyota’s new TNGA-K platform that would go on to proliferate throughout the lineup, including the all-wheel-drive RAV4 and Highlander. But the new Camry, like every predecessor since 1991, would be front-wheel drive only. That there is a 2020 Toyota Camry AWD shows that something quickly changed.

All-wheel drive had been considered during the development of the new Camry, but was nixed. One gets the impression it was a decision made in Japan. Then the car launched, and almost immediately a vocal group of North American customers and dealers started asking why all-wheel drive wasn’t offered and could it be added. This coincided with a continued mass exodus from family sedans to family compact crossovers, at least in part because of the reassurance all-wheel drive provides (even if a good set of tires should functionally do the trick). Toyota of North America made the decision to quickly change course, to offer all-wheel drive on the Camry, and put its own engineers in Michigan to work.

To create the 2020 Camry AWD, those engineers needed to rework almost the entire floor pan to accommodate a prop shaft and rear axle. The only engine paired with all-wheel drive would be the 2.5-liter four-cylinder, which in this application produces 202 horsepower and 182 pound-feet of torque (205 hp and 185 lb-ft in the XSE trim). Besides it being the sole gas-only engine offered by its AWD donor, the RAV4, only 6% of Camrys sold pack the optional V6. On paper, that 2.5-liter would seem to be the same in the Camry and RAV4, but they are in fact different in tiny ways, and it’s the RAV4 unit that finds itself in the Camry AWD. The minuscule output difference between the standard Camry (203 hp and 184 lb-ft in all trims but its own XSE) and the Camry AWD is actually the result of a slight restriction in the exhaust caused by the need to package extra hardware at the rear.

The engine is joined by the RAV’s eight-speed automatic transmission, which possesses the required output for the prop shaft needed to power the rear wheels. That piece of hardware actually comes from the Highlander, but the rear axle and multi-link rear suspension are modified from the RAV4. To accommodate all of the above, an electronic parking brake was fitted and a new gas tank was created in a saddle design that arches over the prop shaft. To ensure there was enough room for the new tank, engineers turned to the Camry Hybrid’s back seat, which is 10 mm higher to accommodate its battery pack. Trunk space remains the same. 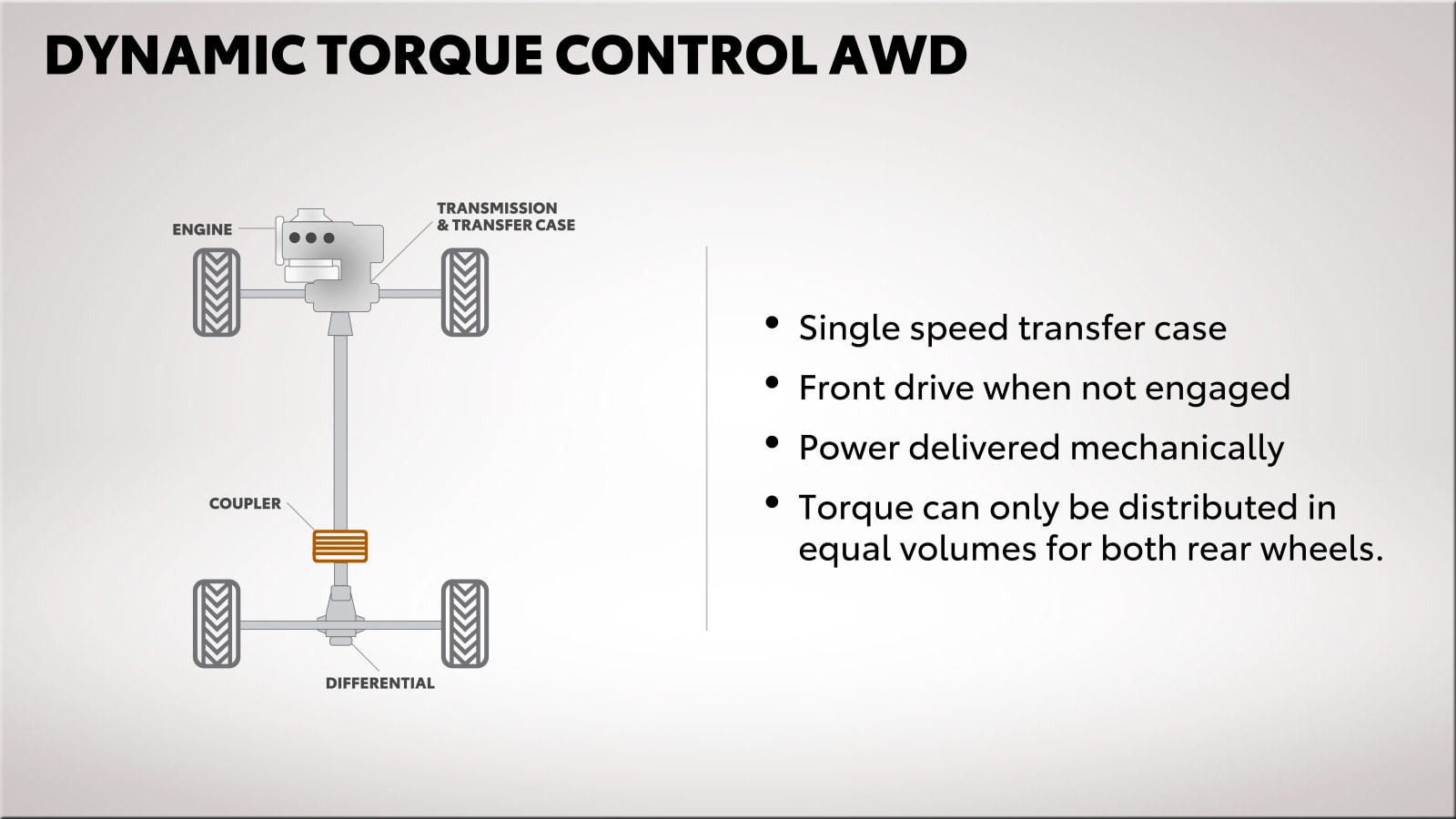 The all-wheel-drive system itself is the so-called Dynamic Torque Control AWD. It’s “dynamic” in that it doesn’t just react to front-wheel slippage in order to engage the rear axle. Instead, it responds to driver steering and throttle input, plus the sensors associated with the traction and stability controls. An electromagnetically controlled coupler in the rear differential then engages the prop shaft, sending as much as 50% of available power in equal proportion to the rear wheels. The brakes are used to pinch the inner wheel while cornering to create a quasi-torque-vectoring effect. To achieve the real thing, upper trim levels of the RAV4 and Highlander offer a true torque-vectoring rear differential that can proportion different amounts of power to each rear wheel. This Dynamic Torque Vectoring AWD is not available on Camry.

As a result, on dry pavement, the addition of all-wheel drive is not obvious. Perhaps torque steer is subtly mitigated by adding rear-wheel input (for instance, when turning and accelerating hard to match hard-charging traffic), but it’s not like the naturally aspirated 2.5-liter is a wheel-wrenching monster in the regular Camry front-driver. The AWD version’s extra 179 pounds also doesn’t do the engine any favors, especially at altitude here in Utah, where hilly terrain and thin air further conspire for acceleration generously described as “sufficient.” It’s also a rather raspy engine, something made clearer when sampling it in the equally outfitted 2021 Toyota Avalon AWD, where an extra spackling of sound deadening makes things far quieter and refined.

On snow and ice, however, the addition of all-wheel-drive not surprisingly makes a difference. Toyota put together a small track covered in snow, slush and ice at Soldier’s Hollow where the biathalon was held during the 2002 Salt Lake City Olympics. As the Camry inevitably began to slide, its wheels struggling to simultaneously grip, change direction and provide forward momentum, the rear wheels clearly made a difference in getting things back under control. Yet, to re-make an earlier point, a set of snow tires would’ve made an even greater difference as our stock cars were riding on all-seasons. Even the slightly grippier all-seasons found on a RAV4 Hybrid did a better job of gripping the mostly ungrippable.

This isn’t to dissuade one from choosing the new Camry AWD, it’s just to say that sending power to four wheels isn’t a panacea for slippery conditions. It is, however, a reason to stick with a family sedan instead of compact crossover if all-wheel-drive is indeed a must-have feature. The Camry has a roomier, comfier back seat than a RAV4, its ride is smoother, and its handling is superior. And that isn’t a backhanded compliment as the Camry is actually quite the capable handler now, especially the sportier SE and XSE trims. That said, the Camry weighs a bit more than most comparable RAV4 trims, so acceleration could be a bit worse, and its fuel economy of 25 mpg city, 34 mpg highway and 29 mpg combined in the LE and SE (it drops to 28 mpg combined in the XLE and XSE) are effectively 1 mpg lower.

All-wheel drive will be an option on all but the base L trim level, and although exact pricing wasn’t available at time of this writing, Toyota officials indicated it would be around $1,500. That would put it in the ballpark of a base price of $27,425, including destination, for the base Camry LE AWD. For comparison sake, the RAV4 LE AWD starts at $28,370. 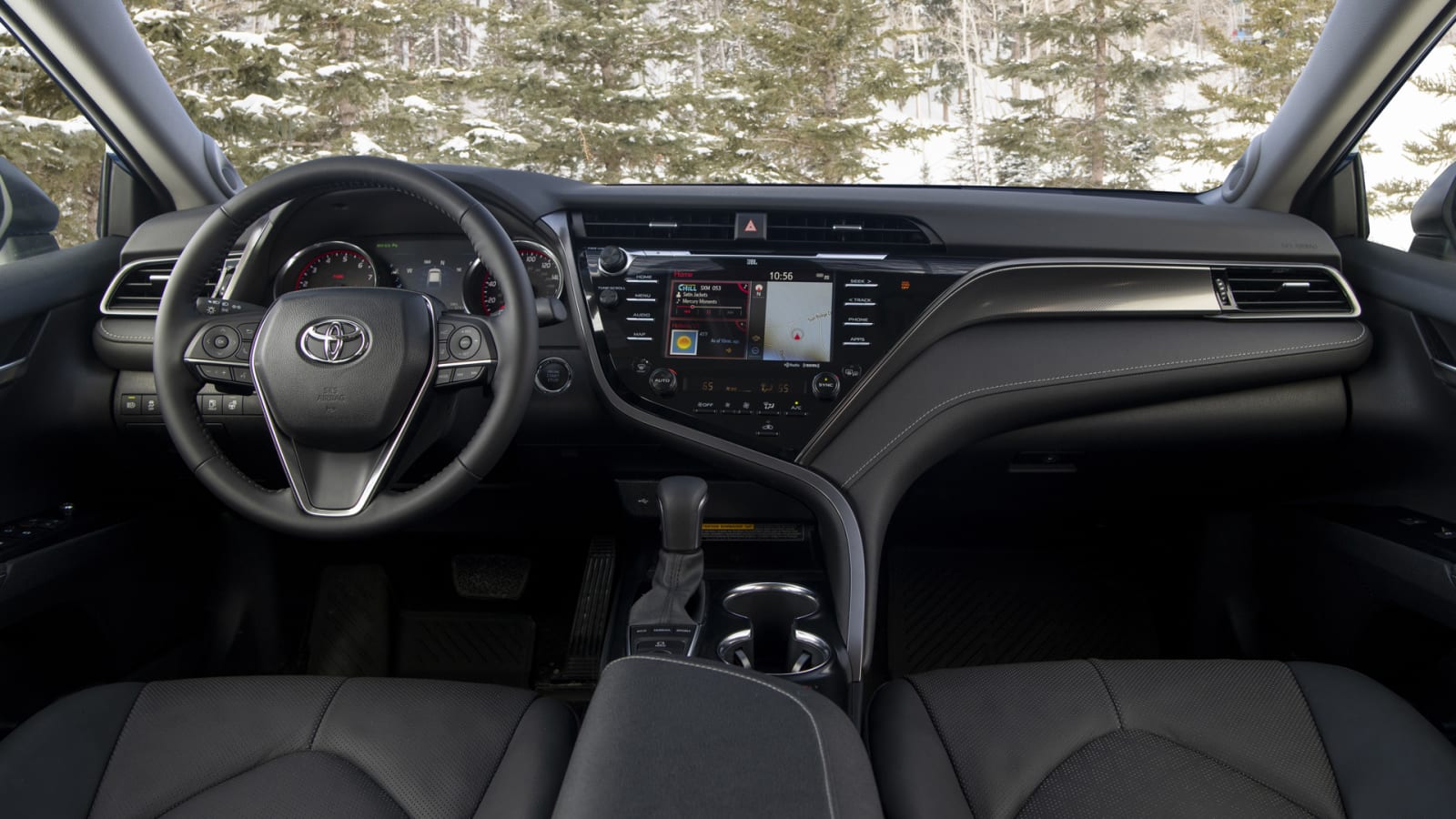 What about the Camry’s apples-to-apples competitors? Well, there are only two: the new Nissan Altima and the Subaru Legacy, which for ages was the only offering for those who wanted all-wheel drive and a base four-cylinder engine. It comes standard with all-wheel-drive and as it can be had with a lesser-equipped base model, the starting price is consequently much lower at $23,645. Its upper trim levels also add something neither the all-wheel-drive Camry nor Altima can match: a turbocharged engine upgrade. That said, the Camry is the far more engaging car to drive, with sharper steering, better body control and a proper automatic rather than a CVT. That pretty much also applies when comparing it to an Altima, which starts at $26,375.

Time will tell whether the adoption of all-wheel drive can stem the tide of customer migration from sedans to crossovers. However, it’s almost assured that the Camry will become the best-selling AWD family sedan. Even if the Legacy continues to be the best-known, its sales are a tenth of the Camry’s, which amounted to more than 336,000 last year despite all the doom and gloom surrounding sedans. Toyota is expecting a total take rate of 15% for the AWD models (but as high as 60% is certain markets), which would indeed surpass Legacy. Besting the Altima, which moved a total of about 200,000 last year, seems like a safe bet as well. In any case, it’s hard to fault the audible Toyota of North America called when deciding to slap together the Camry AWD. It’s well-executed and makes sense for customers, dealers and Toyota’s business. More high-fives all around, then.