A 2020 Ram Power Wagon is not your typical heavy-duty pickup truck. All of them try to be the tough kid on the block, but the Power Wagon goes even further. Just the name, Power Wagon, is synonymous with a tenacious, brash, and mean attitude.

“Let’s go hop in my Power Wagon,” I shout at my friend. I don’t even need to add anything else to that sentence to sound braggadocios. The Ram takes care of it for me.

And I do mean hop into it. One does not gracefully step in and out of a Power Wagon, because it is simply far too high off the ground. There are side steps, but they’re not one of those automatically-retracting ones that forms a staircase into the cabin. Instead, I grab the A-pillar handle, yank myself onto the step, and then swivel around to fall onto the large, comfy seat.

Once inside, the tough kid mantra starts to slip, but only slightly. Ram brought all the fancy interior appointments from the 1500 over to the Heavy Duty lineup with the 2019 refresh, which means the 2500 Power Wagon also gets all the goodies. Our heavily-optioned test truck doesn’t feel rugged or basic on the inside at all. It’s covered in black leather, piano black and carbon fiber-look trim, metal accents and digital screens galore. There are still some rather large ‘Power Wagon’ badges here and there, plus the big mechanical transfer case shifter (the only Ram HD with one), but the inside is much more luxurious than one would expect from an off-road vehicle.

Taking stock of my height relative to other vehicles on the road brings the reality of the Power Wagon back into perspective. Throughout my weekend behind the wheel, there wasn’t another pickup that I passed or pulled up next to at a light that was sitting taller than me. This comes as no surprise, as the Power Wagon features a 2-inch lift from its custom suspension versus other Ram Heavy Duty trucks. It also has Bilstein shocks, front and rear locking differentials and an electronically disconnecting sway bar.

Armed with all that, leaving the pavement is a must. Lacking any great off-road trails or logging roads in the southeast Michigan area, I turned the Power Wagon south and aimed for dirt roads. We had just received a few big rains in the area, and some of the dirt roads around here can get egregiously bad to navigate in winter. Thankfully, I found some mud.

Letting the 6.4-liter V8 out of its shell to bellow its loud roar is best experienced on a dirt road in rear-wheel drive with the traction control set to its off position. Each stop sign or turn is immediately followed by a set of fishtailing tire tracks in the dirt, as all 410 horsepower and 429 pound-feet of torque try to find purchase. Acceleration is brisk enough when there is traction, but the Power Wagon is so heavy that the feeling wears off quickly after an initial thrust to about 40 mph. The new-for-2019, quick-shifting eight-speed automatic deserves some of the thanks here, but that big V8 has power everywhere in the rev range, too. 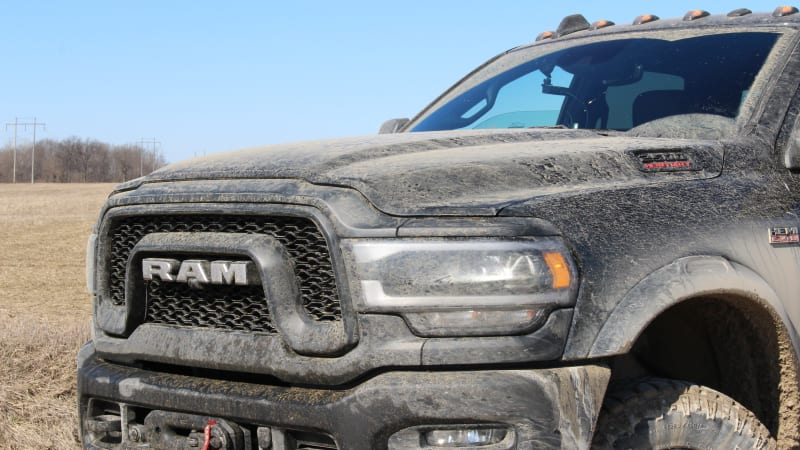 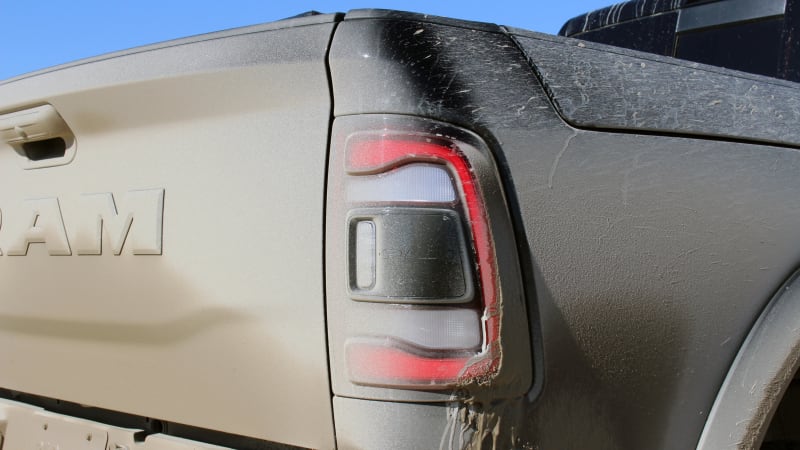 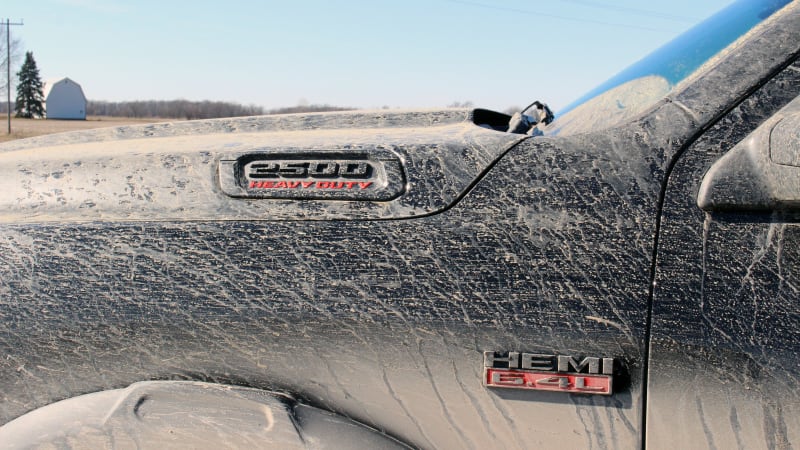 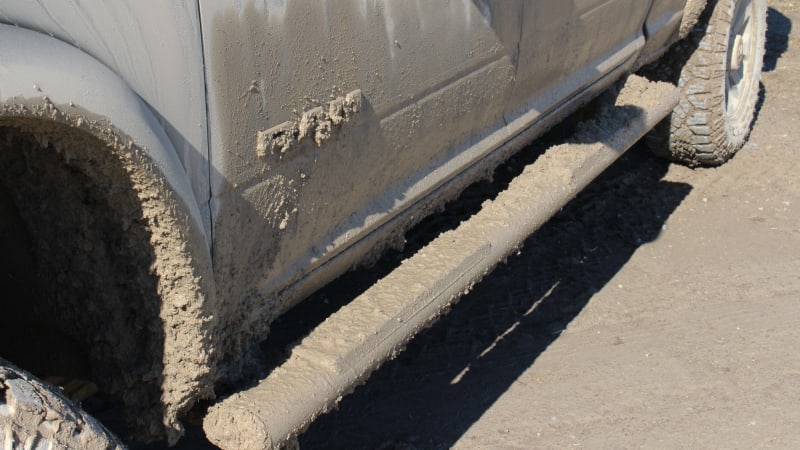 The ride is superb on dirt roads. Even if they’re full of potholes or badly wash boarded, the Power Wagon glides over at speed without ruining the passenger’s day. I can sense plenty of movement going on in the suspension below me, but Ram’s new Heavy-Duty frame does a great job of isolating most of the bad stuff out of the cabin. And then there’s the mud. None of the roads were bad enough to stop the Power Wagon in its tracks, but there were a few mud pits that I would hesitate throwing anything other than an off-road vehicle into. The Power Wagon just laughs. When I feel the mud slowing the truck and clawing me in, I just gun the throttle, shoot the mud straight into the air and come out the other side flying. The truck squirms and floats around as the off-road tires fight for traction, winning every battle with the gnarly dirt roads. It’s satisfying work, and tons of fun in the hugely capable Power Wagon.

For, um, reasons, some folks like to drive vehicles like this as their daily driver. I highly recommend not doing that, but Ram has made the Power Wagon so livable that taking it into a downtown environment is hardly anxiety inducing. The giant, knobby tires roll over Ann Arbor’s craters as though they aren’t even there, as I blind the poor pedestrians with the ultra-bright LEDs mounted high on the truck’s front end. Sorry, my truck is just too damn big.

Parallel parking it was a cinch. Once I identified a spot large enough, the 360-degree camera makes navigating the truck’s long rear end (6-foot-4-inch bed) into the spot easy. It also has both front and rear parking sensors, so I was able to snug it up to the cars in front and behind without actually needing the numerous camera views. From front to back, the truck’s footprint takes up the entire parking space, but it didn’t hang over the lines on either side. And here I thought it was too big.

Long highway slogs are decidedly less fun. The ride is a bit choppy at times, but it’s what we expect from a vehicle like the Power Wagon with a heavy-duty chassis and a 10,290-pound maximum tow rating. Fuel economy is also comically bad. In 246 miles of various driving conditions (including 100 miles on the highway), the trip computer returned a 9.4 mpg rating. So even with the new cylinder deactivation tech, eight-speed automatic and improved aero, fuel mileage is still generally abysmal. 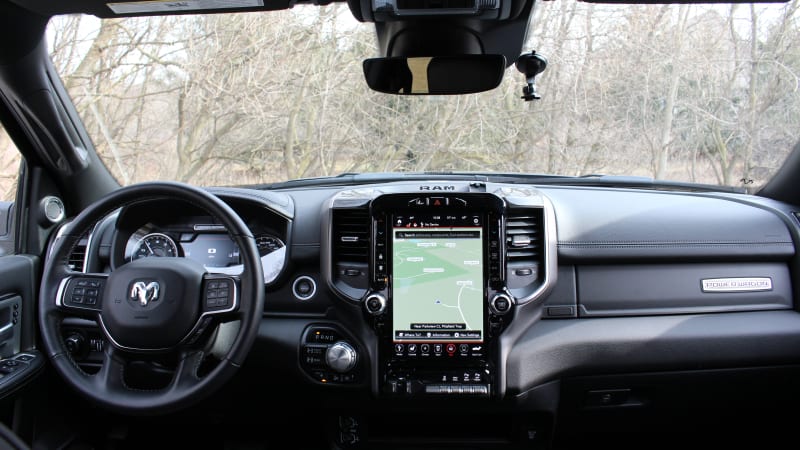 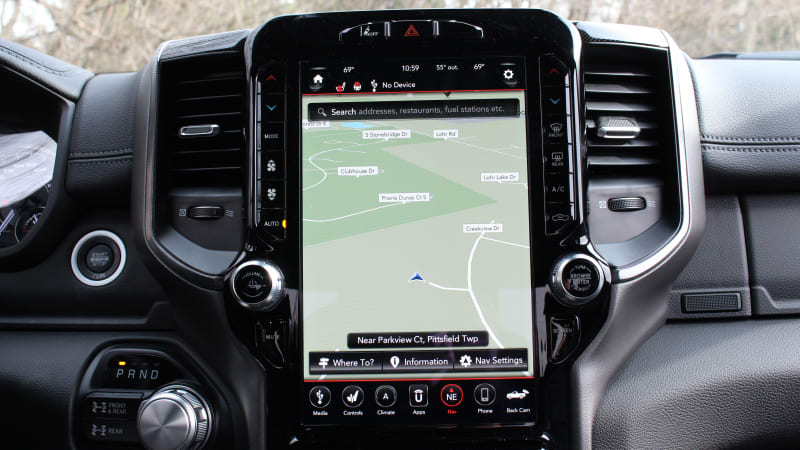 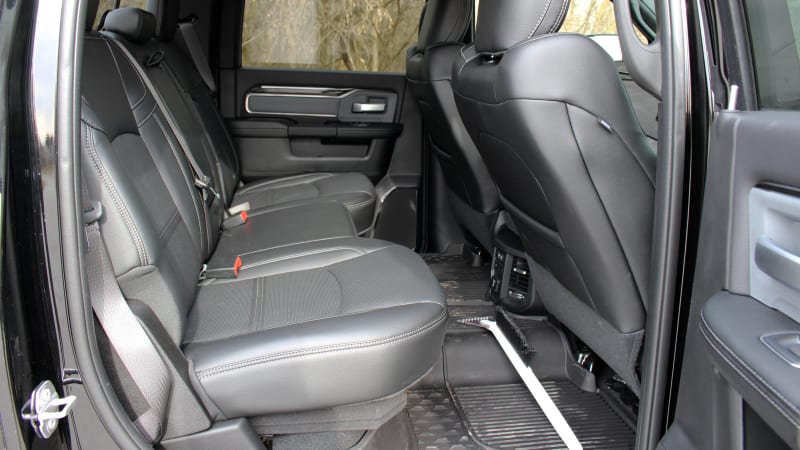 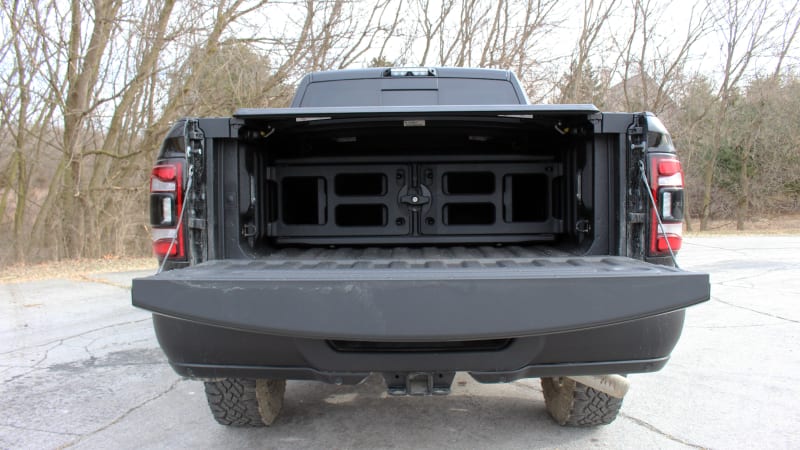 That’s the price of looking cool, though. The new Power Wagon design is largely similar to the previous one, retaining its massive “Power Wagon” decals and massive “Ram” snout with handlebar mustache grille. That standard winch up front is improved for the updated truck, too — it’s a 12,000-pound Warn winch made of a new synthetic line that’s easier to work with.

More luxurious toys abound inside. The Power Wagon starts at $54,945, but our tester was all the way up to $69,890 after options. A $5,695 Level 2 Equipment Group did the most damage, but it brings along a ton of features: heated/cooled seats, heated steering wheel, dual-zone climate control, auto wipers, fully powered leather seats and much more. The 12-inch Uconnect infotainment system with navigation costs $1,995, but it’s a must-buy. And the $795 17-speaker Harman Kardon audio system is a great premium touch in this kind of a truck, too.

Up until a short time ago, the Power Wagon was in its own heavy-duty, off-road truck bubble of one. With the introduction of the Super Duty Tremor package, that’s changed. Ford lets you apply the Tremor package to a range of Super Duty trucks, too, as opposed to Ram’s dedicated Power Wagon model (plus the optional Power Wagon Equipment Group that adds only the mechanical upgrades to the base Tradesman trim). However, without driving them back-to-back, we can’t declare one superior to the other. Each have their advantages on paper. Ford allows you to spec the mighty diesel engine with its off-road package, but Ram says the Power Wagon won’t work with anything but the gas V8. Meanwhile, the Tremor only has a locking rear differential (limited-slip differential in the front) and no disconnecting rear sway bar. We could make these comparisons all day.

If I were to pick one, it’d be the Ram. The interior quality, design and tech are a step above Ford’s Super Duty. And the Power Wagon’s off-road capability is on-par if not better than the Tremor’s, too. It’s excess in nearly every situation, but that’s the world of heavy-duty pickups these days. The Power Wagon, like it’s been for a long time, continues to be an excellent choice.