Most mini refrigerators, you know for like a dorm room, measure 4.5 cubic feet. According to the kitchen experts at Good Housekeeping, the most stylish is Daewoo’s Retro Compact model. “You can pick from five different colors and even get a matching microwave!” says its review.

Why are we telling you this? Perspective.

Some folks will tell you the new 2020 Porsche Cayenne Coupe is only about design. Style. Beauty. Eyeball. But it isn’t, it’s also about the value of just 5 cubic feet, or approximately one dorm room refrigerator worth of cargo space. That’s how much Porsche has sacrificed dicing and slicing its largest SUV into an even sexier fastback version of itself.

Most Cayenne buyers are sure to decide they can’t live without it. They’ll stick with the more practical standard Cayenne, which isn’t exactly a box on wheels, and live happily ever after. But demand for expensive midsize “lifestyle” SUVs with more style and less space has been heating up for years, and the Cayenne Coupe, with its lower roofline, rounded rump and radically faster back window, will find a following, despite its tardy arrival to the class invented by the BMW X6 way back in 2009.

At the time we all laughed at the humpbacked version of the X5. Man, were we wrong. It has not only lasted three generations, it has spawned a growing list of rivals including the all-electric Tesla Model X and the bulbous Mercedes GLE Coupe. With the Cayenne Coupe, the Volkswagen Group now has three dogs in this fight. Its MLB Evo platform not only underpins the Porsche, but also the larger and more angular Audi Q8 and Lamborghini Urus. If asked, we would have told Porsche not to do it. Too risky. Despite three tries, BMW still can’t get the X6 to look quite right and the GLE Coupe resembles an overinflated pool toy. But the Cayenne’s cosmetic surgery was a success. Somehow Porsche has managed to graph the tail end of the Panamera onto the SUV and come out visually ahead. Although everything from the A-pillar back is new, including its rear doors, there are no visible scares. Nothing is lopsided. Its new proportions don’t just work, they work from every angle and its sleeker silhouette is worth the SUV’s modest decrease in cargo space.

Lower and wider usually does the trick, and the time-tested formula has worked once again. The Cayenne Coupe’s roof is 0.78 inch lower and its quarter panels have been widened 0.7 inch. To get the stance right, the rear track has been widened the same amount by increasing the rear wheel offset.

Porsche has also moved the rear license plate from the tailgate down to its bumper, where it is on the Panamera. There are two rear spoilers, a fixed appendage at the top of its new rear glass, and a new active unit, which is also similar to the Panamera’s. When speeds pass 56 mph, it extends 5.3 inches from below the backlight and is visible in your rearview mirror, but it isn’t large enough to block your view. Porsche says it increases downforce. Strangely, unlike the standard Cayenne, the Coupe does not have a rear wiper.

At 21.1 or 22 cubic-feet, the Cayenne Coupe’s cargo space is about the same as you get in a Mercedes GLE Coupe or a Urus. The BMW X6 offers 26.6 cubic feet behind its rear seat, while the Audi Q8 is deceptively large. With 30.5 cubic feet, it offers more cargo space than the standard Cayenne. 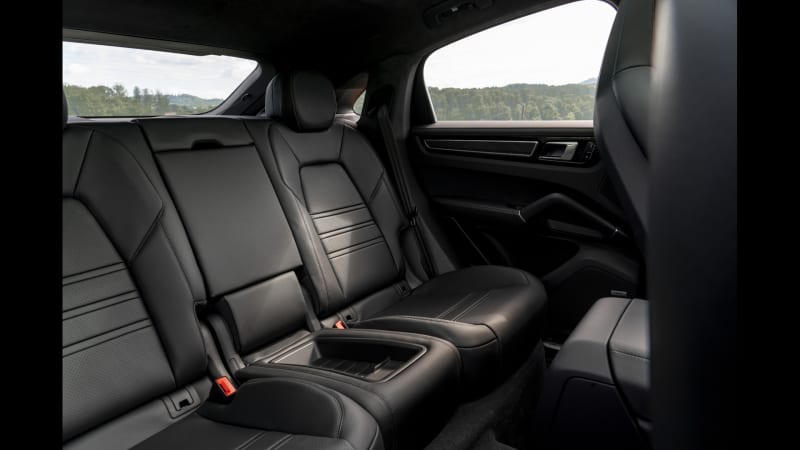 Also gobbled up by its sexy new roofline is about 1.5-inches of rear seat headroom. To minimize the hit, Porsche has dropped the backseat by more than an inch and carved Gurneybubble-like recesses into its headliner above the rear passengers. Most families won’t notice the missing space; with the rear seat reclined slightly teenagers under 6 feet won’t complain. Its 114-inch wheelbase and rear seat legroom haven’t been touched, but the Cayenne Coupe is a four-seater like the Panamera Sport Turismo. A three-across rear bench is available as a no-cost option.

All-wheel drive is standard across the range, and the Coupe will ultimately be available in the same five models and with the same powertrains as the standard Cayenne, including two hybrid models. Although prices have been juiced between $2,300 and $8,500 over those of the equivalent conventional Cayennes, the Coupe still slides pretty comfortably between its two platform mates. At $76,650, including destination, the base model is about $7,000 more than the Audi Q8, which is powered by the same turbocharged 3.0-liter V6, while the range topping $165,750 Cayenne Turbo S E-Hybrid Coupe is far less expensive than the $200,000-plus Lambo. With 670 hp, it’s also more powerful than the Urus.

Along with their larger MSRPs, Coupe models get more standard equipment, including a glass roof (a body-color metal roof isn’t even offered) and the desirable Sport Chrono Package, which usually costs an extra $1,130. It adds launch control and the steering wheel drive-mode selector with Normal, Sport, Sport Plus, and Individual settings. The coupe also gets standard adaptive dampers and sport front seats with more bolstering, while base, Cayenne S and E-Hybrid models receive a modest wheel size increase, from 19 inches to 20, and substantially wider tires, 275/45ZR20 front and 305/40ZR20 in the rear. Porsche painted our Turbo Coupe test car Lava Orange, one of two exclusive Coupe colors. It’s a $3,150 option and a bit too Dukes of Hazzard for our taste, but it complimented the SUV’s 911-ispired curves well. An optional Sport Exhaust System, Lane Change Assist (blind-spot warning), Porsche Torque Vectoring Plus and Porsche Dynamic Chassis Control drove its $131,450 base to a final tally over $145,000.

That’s not even including the big money items. No $5,580 ceramic composite brakes and sadly, no Lightweight Sport package, which fits 22-inch forged alloy wheels, retro cool houndstooth fabric seat inserts and a carbon fiber roof panel in place of the glass (pictured above right on a different test car). Porsche also removes some sound-deadening material. Depending on the package variant (there are three), 39 to 48 lbs are removed from the roughly 5,000-pound vehicle. Porsche says it’s enough to shave a tenth of a second from the 0-60 mph times of the Cayenne Coupe and Cayenne S Coupe. Maybe so, but with prices ranging from $11,570 to $15,050, that’s an expensive blink of an eye.

With a 541-hp twin-turbo V8, standard 21-inch tires and adjustable air suspension, the Turbo model isn’t sweating the 48 lbs. The 4.0-liter makes 567 lb-ft of torque at just 1,960 rpm, so it’s impossible to catch it off its game. It also sounds good, with raspy buh, buh, buh idle, and the Cayenne’s double overdrive eight-speed automatic never makes you beg for a downshift. Porsche says the Turbo hits 60 mph in 3.7 seconds, matching BMW claim for the 617 hp X6 M Competition, which is nearly 350 lbs heavier. Since it’s so much lighter, the Cayenne Turbo Coupe is also more fun to toss around than the X6 M. It doesn’t feel as big and it’s undoubtedly faster in the hills. It also rides significantly better than the Bimmer, especially when equipped with our test car’s active roll stabilization system known as PDCC. For an extra $3,590, this system not only gives the Cayenne the most comfortable ride in the class, it improves its suspension articulation off road and controls the SUV’s body roll perfectly when you’re pressing.

And with more than 450 miles of range, it’s an astute grand tourer. After a 400-mile day, I was ready for another 400. Seat comfort is excellent and the Turbo’s interior is quiet. Somehow I averaged 20.3 mpg pushing pretty hard, beating its 19 mpg EPA highway rating.

Of course, the last few paragraphs also apply to the conventional Cayenne Turbo. The Coupe version doesn’t drive any differently, doesn’t feel unique in any way from behind the wheel. Which brings us back to the mini fridge and the value of the Coupe’s missing 5 cubic feet of cargo space. What’s that space worth? Do you really need it? Will you really miss it? Is it worth sacrificing in order to drive a more attractive SUV? Only you can decide which Cayenne is right for you, but it seems like a fair trade to us.