There is always going to be a better Porsche 911. Yet, that fact is hard to care about when in the driver’s seat of any variant on the performance ladder, because every single one of them is enchanting to drive. This time, it’s the 2020 Porsche 911 Carrera 4.

From a layout and specs perspective, it could be argued this 911 configuration is the most boring of the bunch. It has the lowest power output, and it’s saddled with all-wheel drive, adding unnecessary weight (106 pounds more than a rear-drive Carrera) to a car that isn’t some lurid, uncontrollable mess when power goes only to the rear. Basically, it’s the 911 you’d want on a snowy winter day, geared up with winter tires and heated seats. That’s where the Carrera 4 starts making sense on paper, but in practice, it also makes sense the rest of the time.

Porsche claims 379 horsepower and 331 pound-feet of torque from the 3.0-liter twin-turbocharged flat-six out back, which is 9 hp more than the previous-generation Carrera 4. With the Sport Chrono Package (as ours is equipped), it’s scheduled to hit 60 mph in 3.8 seconds. Our internal stopwatch says that number is high, but that’s Porsche for you. Under promise. Overdeliver. It tops out at 180 mph, which is enough to leave most of the Autobahn in the rearview mirror.

This may be a base Carrera 4, but it’s special from the second you twist the fob to the left of the steering wheel. Nothing else in the automotive world sounds like a 911. Other Porsches with a V8 or V6 sound good, but this flat-six lets you know it’s a different kind of animal right away. The whirring and raw mechanical goodness is there at idle, and it only gets better as the revs climb. Pay for the Sport Exhaust option. You’ll be happy you did. 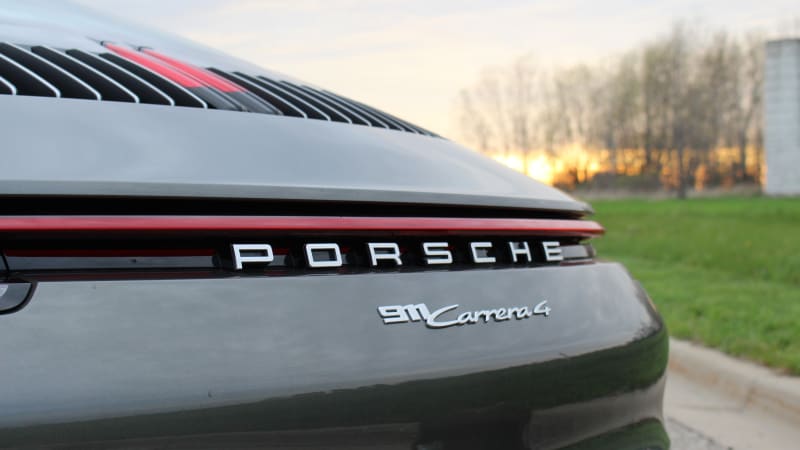 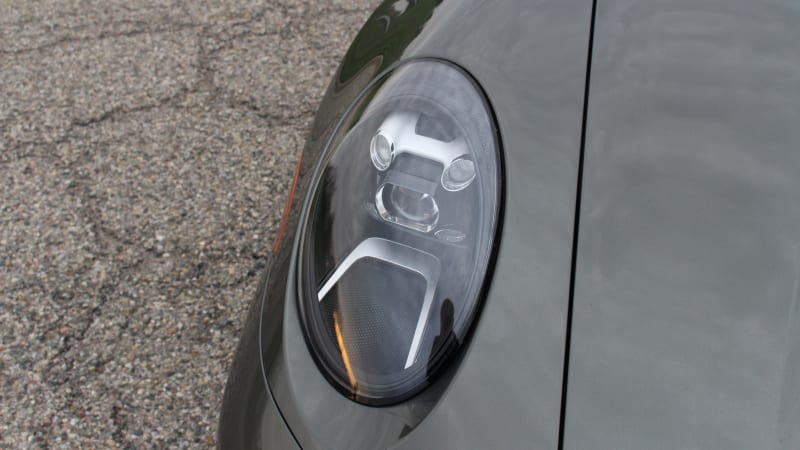 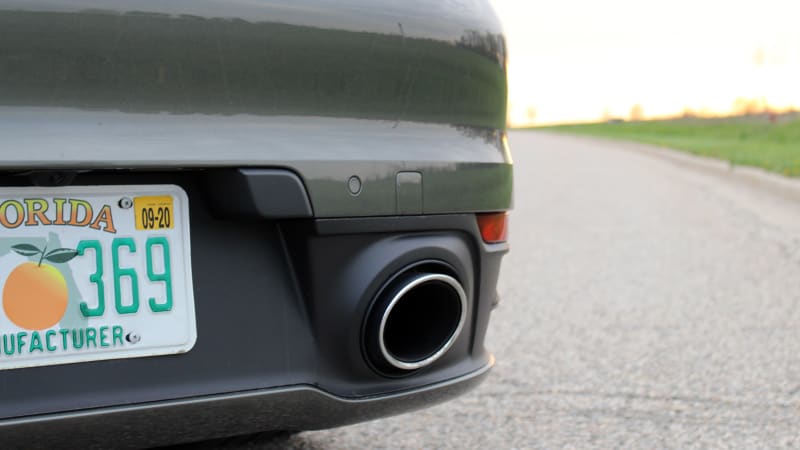 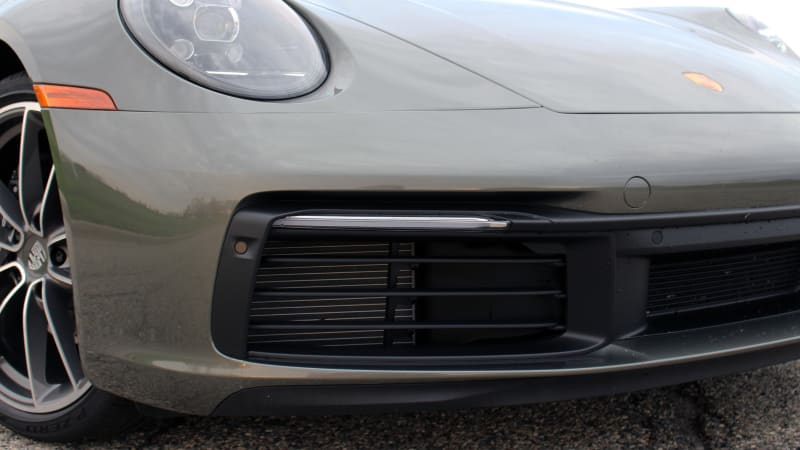 Taking advantage of this model’s all-wheel-drive system is the first thing on our minds. Porsche claims to have improved the front axle drive componentry for the 992. The clutch and differential are now water-cooled, and it features reinforced clutches. This increases both durability and load capacity, and it also allows for a more accurate adjustment of clutch force. The greater capability of the driven front axle should result in better traction and handling in all conditions, wet and dry. In most circumstances, the majority of the torque heads rearward (up to 100 percent). Unlike some all-wheel-drive performance cars, though, the 911 Carrera 4 doesn’t have a mode that fully disconnects the front axle.

Activating launch control seems like the most obvious way to see how well Porsche is able to put all 379 horses to the ground. Just like every other new Porsche these days, the launch experience is akin to being punched in the chest. The engine revs up to 5,000 rpm, then you’re rocketed away without hesitation or lag as the eight-speed PDK transmission does its job flawlessly. Fair warning, the launch will cause cell phones to fly out of your passenger’s hands and into their face if they’re not holding on tight enough. Ask us how we know.

After that initial violent shove forward, acceleration is brisk and relentless. But this is where the difference between the S and non-S come into play. Both will break necks with the launch, but the 443-hp Carrera S will continue to leave you breathless thereafter. The base Carrera 4 … it’s very quick, but the power downgrade is immediately noticeable. The difference between 0-60 mph in the high-3s and 0-60 mph in the low-3s might not seem like much on paper, but from the driver’s seat, it’s enough to make us think upgrading to the S is $15,900 well spent.

Without a rear-wheel-drive Carrera on hand to compare, it’s difficult to declare the Carrera 4 superior or inferior in corners. In many situations, the all-wheel-drive system spoils the fun. Instead of breaking loose, power is transferred to the front wheels to pull the car through the corner. If you really plant your right foot, the car is less hostile to slides, but in general, you’re left with an all-wheel-drive system that would rather be technically proficient than make you giddy with laughter. The solution? Just get the rear-wheel-drive Carrera.

Regardless of its drivetrain, the chassis is utterly sublime. It may weigh 3,460 pounds, but you just don’t feel that heft in corners. The adaptive dampers smooth out bumps and undulations that upset lesser cars, yet the body hardly even leans in corners. Friends driving behind us were mesmerized at how little the body moves side to side, and you can feel it from the driver’s seat.

The balance is spot on. In quick transitions there’s a light, agile feeling in the rear as it follows the front through a winding road. Porsche has long since tuned out the dangerous side of driving a rear-engine car, but you can still sense the weight back there and the car working hard to keep it as neutral as possible. Feel is still a big part of the equation for the 911, too. There’s no better electric steering rack in the business, and the 992 continues that tradition. It inspires confidence to push harder than you may feel comfortable to do in other cars. The optional 305-section-width rear and 245-section-width front Pirelli P-Zero summer tires are sticky helpers in that department, too.

Luckily, there was actually some rain during our time with the Carrera 4, which made it possible to try out the 911’s new Wet Mode for the first time. After driving in fairly heavy rain for about a mile, the car suggested activating Wet Mode, which lowers the actuation threshold for traction control, stability control and ABS systems. It also adjusts the responsiveness of the drivetrain, increasing torque distribution to the front axle and reducing the degree of rear diff locking. On top of that, the front air flaps are moved to their fully opened position, and the rear spoiler is extended to provide added stability. In practice, you don’t notice much of a difference. Flooring it in the wet induced minimal wheelspin, as the systems worked to keep the car in check. Adding power in a corner didn’t cause the rear end to step out, as power was being transferred forward. Basically, it seemed to do its job as described.

In around-town driving, the 911 is just as pleasant as it is under full throttle. It’s not GT-level comfort, but it’s still comfortable enough to be used as a daily driver. That said, most new 911 households are multi-car households, as Porsche says the median yearly household income for new 911 buyers is $750,000. That’s no surprise, given this car starts at $106,050, including the $1,350 destination charge.

The fun varies based on how much you decide to wring it out. That flat-six starts sounding good around 3,000 rpm, and only gets better on the way to the 7,500-rpm redline — ours has the optional $2,950 Sport Exhaust System that should probably just be standard equipment. The real kicker is that Porsche has managed to retain character and a free-revving experience with its twin-turbo flat-six. There’s no letup as you fly into the upper rev ranges, and the power at the top encourages shifts at redline. But at the same time, maximum torque hits at only 1,950 rpm, making the car feel punchy when driven at low speeds. The only compromise is the wait for boost to build at low speeds when you’re not using launch control. Other than that one circumstance, Porsche has succeeded in making an engine that excels when driven hard or lazily.

Our test car happened to be kitted out in a splendid spec. On the outside we have Aventurine Green Metallic. It’s a mossy, earthy green that shines and sparkles in sunlight, but the effect is largely muted under grey skies. For just $830, this color is one of the better value buys on the 911’s options sheet. The 911’s interior — more thoughts in the Buying Guide here — doesn’t change much from model to model, but it is highly customizable via options. Ours had the $4,530 Leather Interior in Black option, which covers darn near every surface in black leather. It’s sumptuous, but that’s money that could’ve been spent on performance/convenience extras this car didn’t have like Porsche Torque Vectoring Plus or the Front Axle Lift System. The $1,900 Paldau wood interior trim breaks up the black leather nicely, but seems like another unnecessary addition.

All in, our 911 Carrera 4 rang up to $128,400. You pay an extra $7,300 for the privilege of having all-wheel drive over the standard Carrera. If you plan on driving your 911 through the winter, it seems like a no-brainer to get the 4. Put some winter tires on the car, and Porsche’s winter driving experiences have shown what a blast you’ll likely be having. If snow isn’t in the equation, just buy the regular Carrera. We haven’t been able to pit the two against each other in a comparison test yet, but we’d recommend trying out the much cheaper 2020 Corvette before plunking down the Porsche money. And if it’s between a Mercedes-AMG GT, Jaguar F-Type or any other similarly-priced sports car, count us in for the Porsche.

A base 911 doesn’t exactly feel base when it’s this expensive. It begs the question: what about a Carrera S? That car is now encroaching on supercar levels of speed, and it’s just $114,650, cheaper than our test car with its options. You don’t need the extra 64 horsepower, but it sure doesn’t hurt. Of course, the same conclusion will inevitably be made when the GTS ultimately comes out. And again, when the GT3 hits the streets. There is always going to be a better Porsche 911, but know that you can still have a hell of a good time in a base Carrera 4.

33 mins ago
Want to buy an F1 team? Williams is considering selling

33 mins ago
Want to buy an F1 team? Williams is considering selling

2 days ago
Gymkhana 11 will be hosted by Travis Pastrana