An abundance of power isn’t typically associated with products named Mini Cooper. Even the John Cooper Works (JCW) editions have most recently been making do with 228 horsepower from their turbocharged four-cylinder engines. That’s plenty to feel quick and sprightly, but drag races still haven’t been kind to high-performance Minis. Things are different with the 2020 Mini Clubman John Cooper Works. It has a 2.0-liter turbocharged four-cylinder that makes a rowdy 301 horsepower and 331 pound-feet of torque. That’s good for a 0-60 mph run of just 4.6 seconds, which is sufficiently spicy for our tastes.

This being the Clubman, it’s more of a pocket rocket that doesn’t quite fit in your pocket. Its four doors and quirky barn door hatch opening gives it far more utility than the much smaller two- and four-door Hardtops. Still, the Clubman is a small car, based off a BMW platform that underpins a variety of BMW Group front-drive-based cars and SUVs. From a size and shape perspective, it’s most like the BMW X2. The quick X2 M35i and JCW Clubman even share an engine.

As we’ve come to expect from John Cooper Works Minis, this new one is full of performance extras. The new engine has a stronger crankshaft, new pistons, connecting rods and a lower compression ratio (10.2 to 9.5) to better suit the increased boost pressure. A larger turbocharger is also fitted with a blow-off valve that Mini says contributes to its better response. The much more powerful engine is paired with a new JCW-specific exhaust that is livable when driving conservatively, but raucous and in your face once you dip into the throttle a little deeper. As standard, the JCW Clubman is paired with an eight-speed automatic transmission that brings launch control with it. No manual is available, and that’s a shame. Mini has kept the stick shift around for longer than many car companies, and its absence from the enthusiast-focused JCW Clubman is a big disappointment.

There’s a mechanical limited-slip differential up front integrated with the automatic transmission, allowing torque to be shifted from one wheel to the other should one begin to slip. On top of that, the JCW Clubman also comes standard with all-wheel drive. Like all-wheel drive Minis before it, if the front wheels are short on traction, power is instantly transferred rearward, but power is sent to the front as often as possible for efficiency’s sake. Mini has also upgraded the brakes to some larger hardware and optimized the cooling duct geometry for better airflow to the brakes.

All of this new hardware makes for an engaging and entertaining drive. The JCW gives its performance intentions right away with that exhaust on startup. Even in casual driving in Normal mode, each shift is met with a blat from the exhaust followed by a constant growl that fills the cabin. In case the sound wasn’t a big enough hint as to this car’s intentions, the ride is the next obvious indication. It’s stiff and inflexible, a trait we’ve come to expect from fast Minis. All the bumps in the road are abundantly obvious at all times no matter the suspension setting. However, that also makes for excellent handling and response in corners. The Mini changes direction instantly and is eager to be thrown about. The two-door JCW Hardtop is the ultimate athlete in Mini’s lineup (until the GP goes on sale), but this Clubman is still a riot in corners. Its all-wheel-drive system keeps the front wheels from being overwhelmed, as sufficient-enough power is transferred to the rear to minimize front wheel slip. There’s a tangible feeling of heft — it is a larger, heavier Mini at 3,609 pounds — but it still feels smaller and lighter than the BMW crossovers it shares a platform with. That said, both the Civic Type R and Golf R feel more agile and focused than the JCW Clubman. And the Mini’s ride doesn’t make up for it, as the Golf R is more comfortable, while the Type R is similarly stiff.

Smashing the go pedal is rather addictive with this amount of speed, though. Launch control is effective at building boost and rocketing the car away from a standstill over and over again with ease. It’s not fast enough to miss having a third pedal, but this transmission is still smart and quick. The paddle shifters are fun to use in manual mode, and the slapstick gear lever (which works the correct way: back is upshift, and forward is downshift) brings a semblance of engagement to the equation. Mini makes it fun by filling each shift with drama, followed by an overrun full of pops and crackles off throttle. Sure, it’s semi-manufactured noise, but it’s loud and sounds fantastic for a little 2.0-liter turbo. The 73 horsepower and 73 pound-feet of torque increase over the previous JCW Clubman makes this car a fast bundle of joy.

Just like any Mini, though, there are plenty of downsides. The interior is constantly toeing the line between quirky and annoying. Visibility is weird at first, but the faraway windshield and split rear window is something you can get used to. The infotainment system, on the other hand, is a heavily re-skinned version of the old BMW iDrive on an 8.8-inch touchscreen (a 6.5-inch screen is standard). A rainbow of colors present themselves throughout the screens, and it can be controlled via touch or a rotary control knob. Since BMW is behind the tech, only Apple CarPlay is available, leaving Android users out to dry. It’s nowhere near as straightforward or simple to use as BMW’s system with menus on top of menus. The system’s saving grace is its speed and fluidity, as it moves through screens and settings without a hiccup. 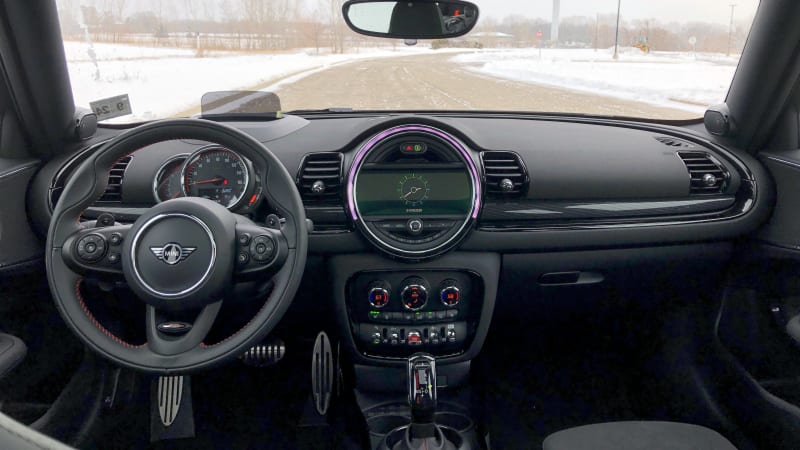 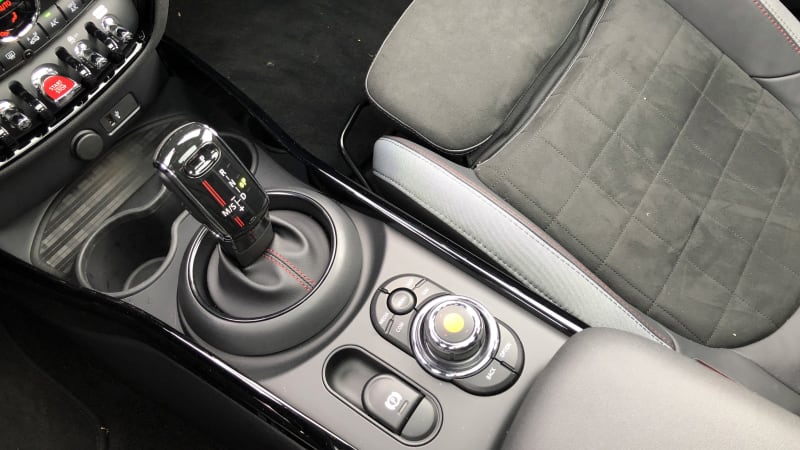 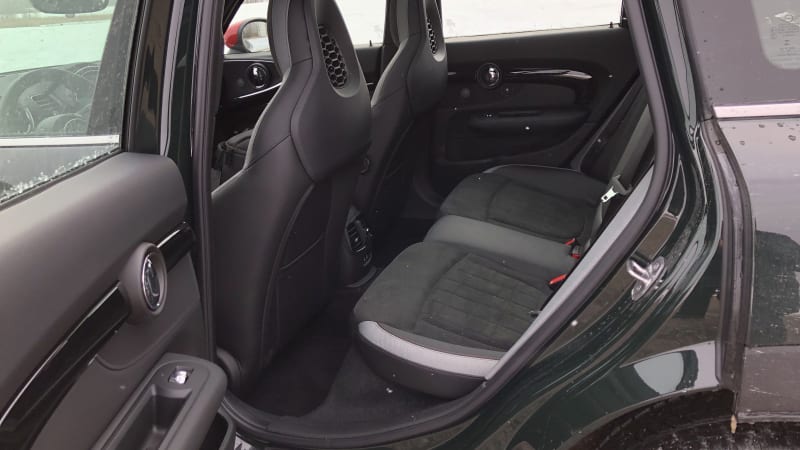 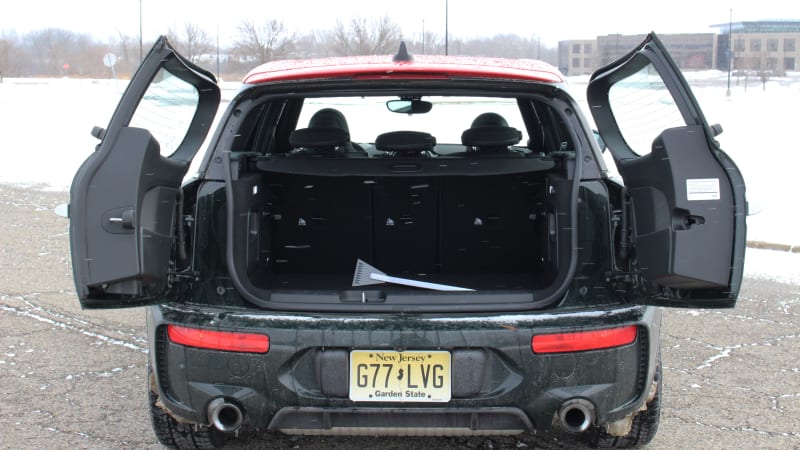 Fans of physical gauges will enjoy this cluster, but its small font still isn’t the easiest to read. That’s where the head-up display (standard on the mid-tier Signature trim) comes into play, as all the information you need can be read while looking through the windshield. The ambient lighting is playful on the interior, too. Both the doors and dash are covered in trippy trim that lights up where you’d expect piano black or aluminum inserts to be. It’s not customizable like the ambient LED lighting found surrounding the infotainment display and overhead lights, but it’s arguably more interesting in its light design. A satisfying-to-use row of toggle switches underlines the climate controls. Note to manufacturers everywhere: Toggle switches are always more fun and engaging than boring buttons, and they look cooler, too.

Those are serious driver’s cars that make choosing the Mini a whole lot tougher. The difference maker for the Mini will have to be its personality. This Clubman is chock full of it from the second you lay eyes on it. Mini lets you customize all of its cars to your heart’s content from an appearance perspective, so you can build something from scratch exactly the way you want from the factory. You want Union Jack mirror caps to match your Union Jack taillights? No problem. How about a green body with a red roof and blue leather? You got it, chief. The Golf R and Civic Type R only offer one interior, a handful of colors and virtually no options; the luxury brands offer a bit more variety and you can technically order them, but none approach the have-it-your-way Mini.

The JCW Clubman might be a bit much at times, but that’s what it’s supposed to be; take it or leave it. In this car’s case, we were taking it, as editors volleyed praise back and forth for its driving dynamics all week. Seeing the sticker tempered some of those proclamations of greatness, but the JCW Clubman still manages to put a smile on our faces.