Slipping into the leather, carbon fiber-backed seats and turning on the engine is an event in the 2020 Lotus Evora GT. Stick the stubby, unmarked key in the ignition, turn two notches; press a button on the remote; push the clutch in, and hold the “Engine Start” button down. The tachometer springs to life, zinging up past 2,000 rpm before settling into an even, but emphatic idle. If everybody wasn’t already staring at the little British sports car in the parking lot, they are now.

Once the astoundingly complex, but charming start procedure is done, the fun begins. Lotus has sold only one other more powerful version of the Evora in the United States, that being the GT430. This GT is rocking a poked and prodded version of the Toyota 3.5-liter V6 engine found in all Evoras, but as in some other versions, an Edelbrock supercharger has been added to boost output. With the six-speed manual, its output is 416 horsepower and 317 pound-feet of torque. Twist increases to 332 pound-feet with the six-speed automatic, but don’t buy a Lotus with an automatic. Just don’t do it.

The gear lever snicks into first with positive, notch-like action. Lotus’ analog gauges stare back, displaying the most important information in a legible size and font. There’s a digital speedometer tucked into a little nook under the steering wheel’s red center line, just the right height for a quick glance downward. Grippy leather covers the 9 and 3 positions on the wheel, while soft Alcantara contrasts with the leather on the top and flat bottom of the wheel. Lotus clearly knows that sweaty racetrack hands and Alcantara don’t mix.

This clutch is heavy, is the first thought upon setting out on the road. It fits the car and makes the driver work a little to be smooth. Good. Driving a Lotus shouldn’t be a walk in the park. The driving position is bang-on. Those manually-adjustable (and heated!) leather seats are mounted low, their bolsters large enough to be snug, but short enough to slip over getting in. The view forward doesn’t leave much to be desired, but looking out the back is like looking through a mail slot. There’s a tiny box of glass, but it’s tinted, making it difficult to see whatever might be visible. Side mirrors it is, and those are plenty fine, even allowing a view of the wide rear hips. 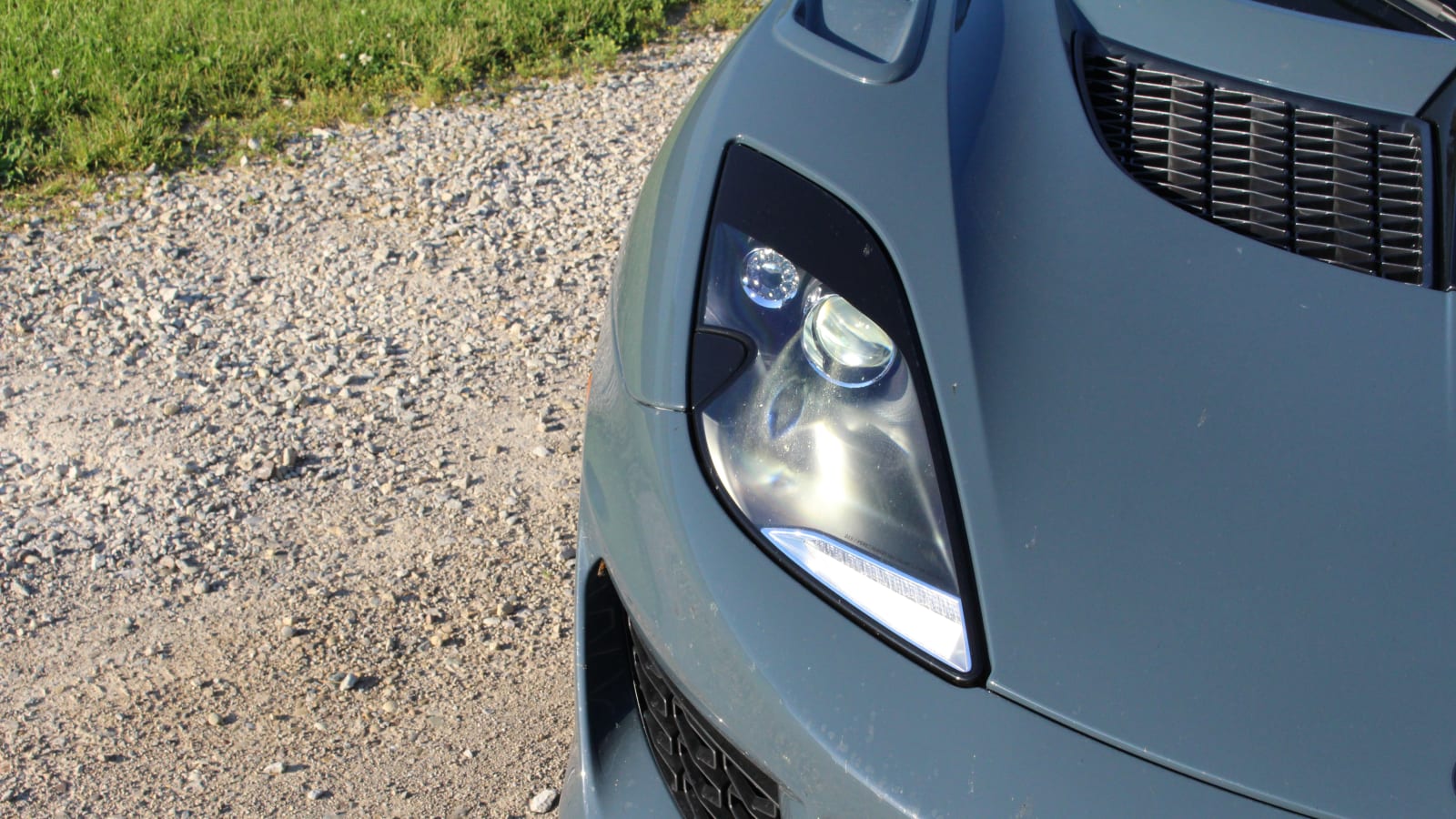 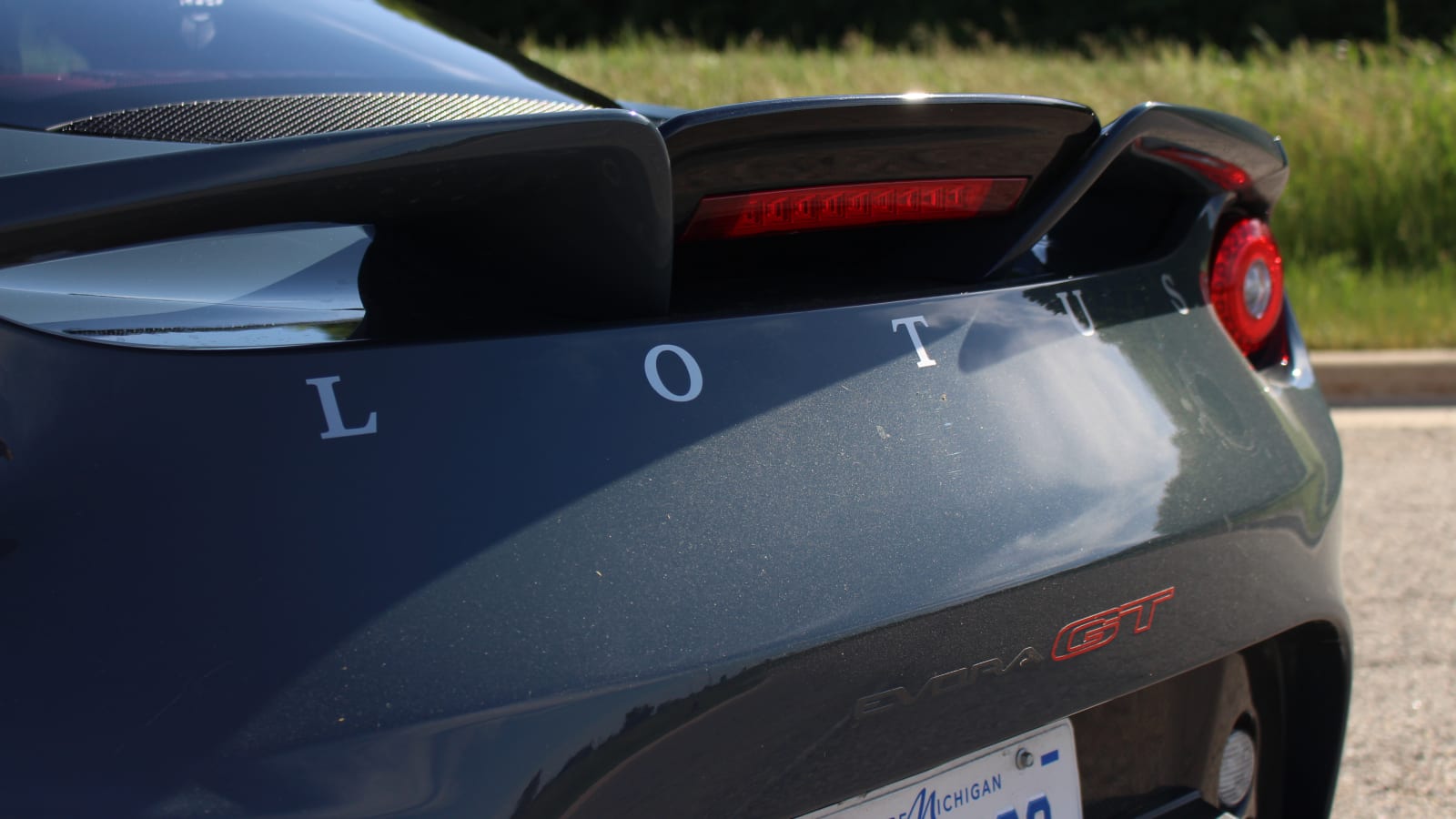 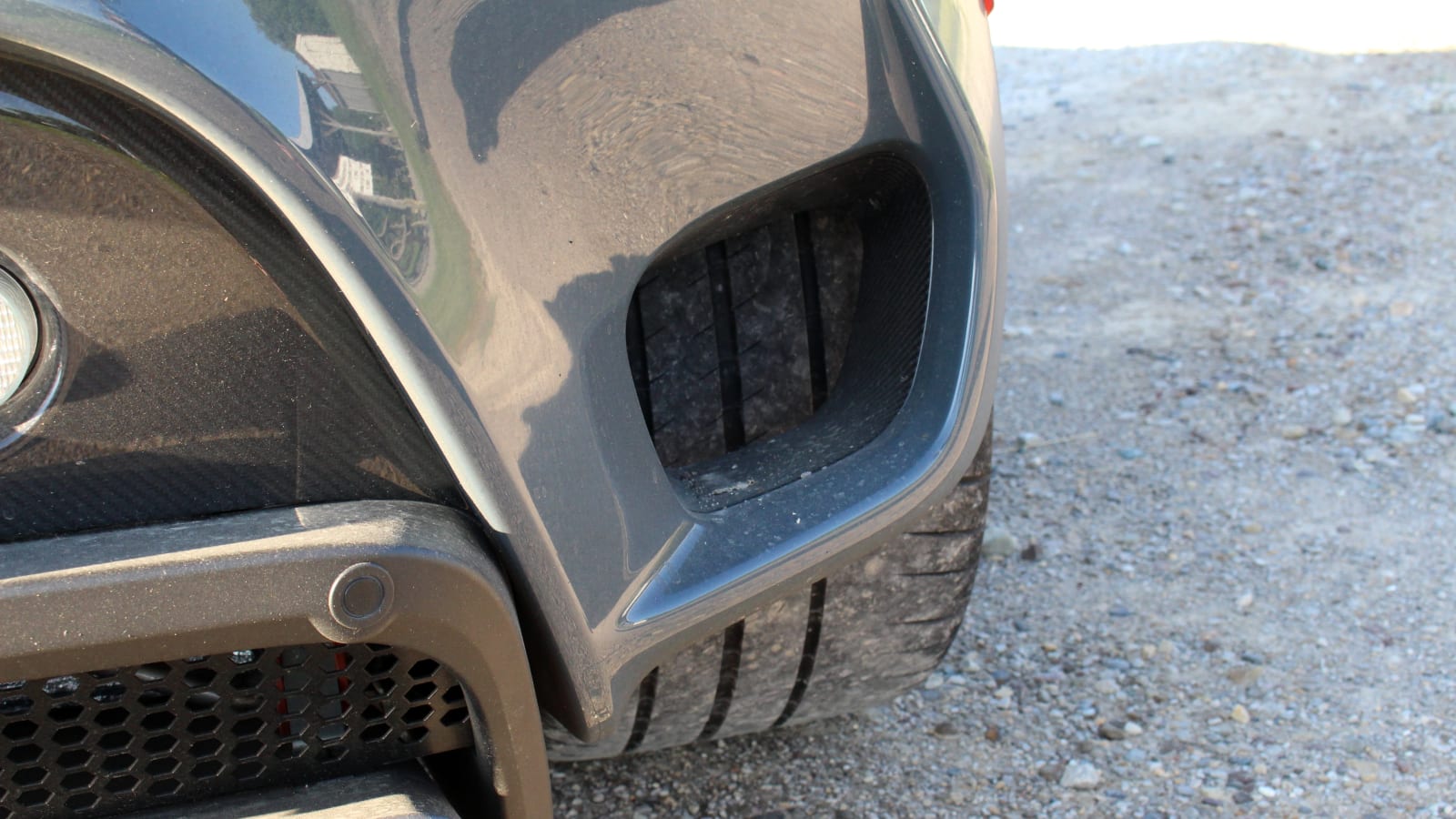 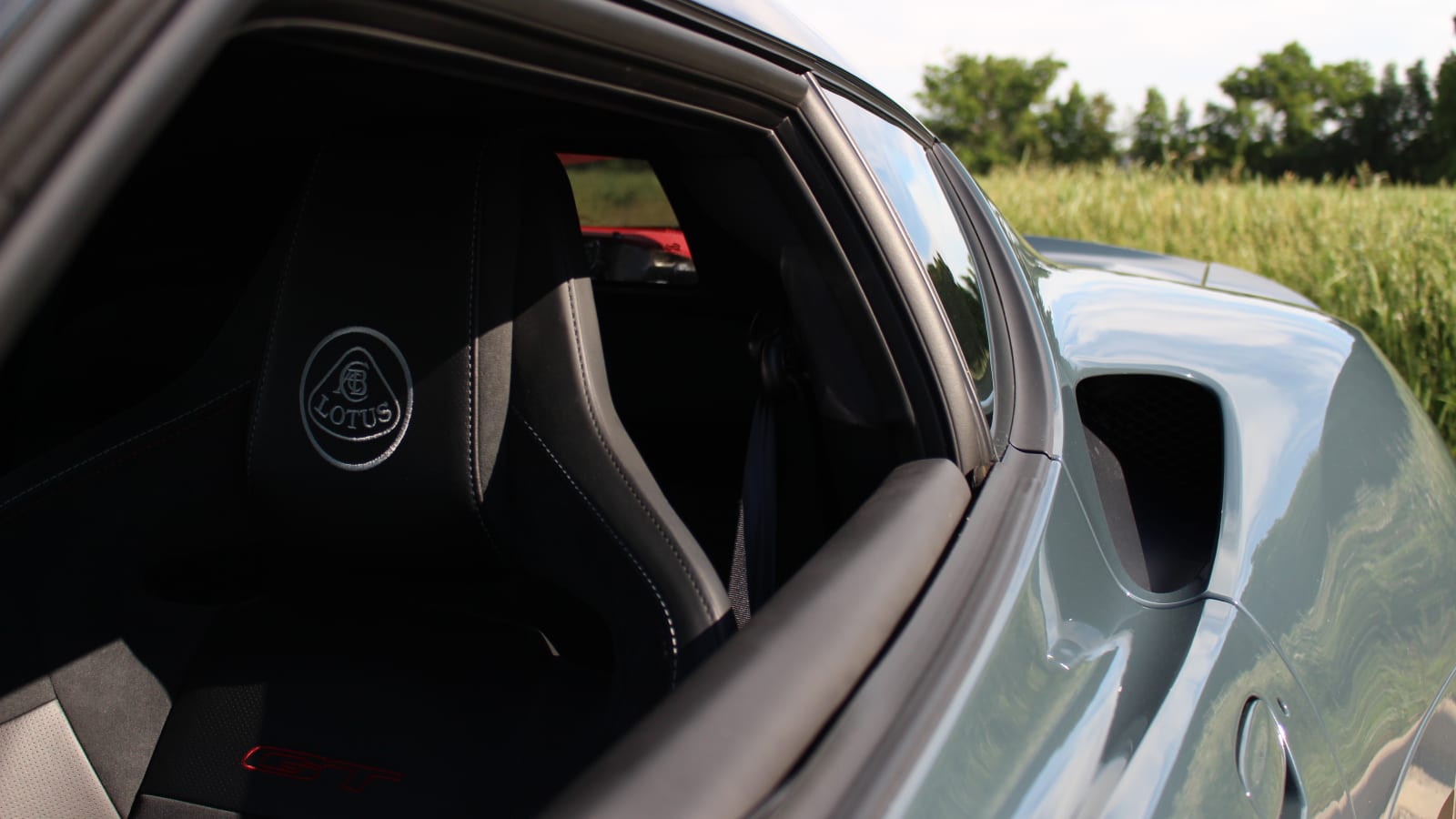 At speed, racecar vibes abound instantly. Lotus uses hydraulic power steering still, imparting all the feel and intimacy lost through most new cars’ electric power steering systems. The exhaust is quiet in the normal Drive mode, but instantly perks up in Sport. This is a car that doesn’t want to crawl around in traffic, but still handles the task adeptly. The air conditioning is strong and easily adjusted by the car’s center controls. Even the aftermarket Alpine head unit has Apple CarPlay and Android Auto. The screen did refuse to turn on a few times, but a quick cycling of the engine fixed the issue each time. Call it British electronic charm.

Any worries about the infotainment system’s unreliability quickly melt away when the hammer drops. By 3,500 rpm, the supercharger is whining away. Get it up to 5,000 rpm, and a distinct howl is reverberating throughout the cabin. Taking it all the way to the 7,000-rpm redline leaves mouths agape. Do this under a tunnel and visions of Formula 1 cars appear. Lotus made a Toyota V6 sound this good? Yup. Believe it.

The climb up to 7,000 rpm is a linear and predictable one, too. There’s no wait for boost or a drop in the torque curve as redline nears. It’s a steady climb and party the whole way up, and it’s utter perfection for tackling a backroad with confidence. Even the amount of power is of the just right variety. Lotus claims a 0-60 mph time of 3.8 seconds — plenty quick that it never leaves you wanting for power, but it’s not overwhelming on a technical, winding road. Many supercars are only exploitable on a racetrack. This Lotus is divine no matter the location.

From low parking lot speeds, to building up Gs in a corner, this Lotus is always talking. Wide Michelin Pilot Sport Cup 2 tires sit at the edges of the car. The 295-section-width rears are visible through a cutout in the rear bumper from behind. They look comically wide for how small the Evora GT is, but that’s part of the appeal. The steering weights up naturally in corners and transmits bumps, rises and grip levels directly through the small, magnesium wheel. Corner after corner goes by without having to think. It may sound dramatic or cliché, but the Evora GT makes the driver and car meld together as one moving entity. There’s a rapport between the two. The car does as it’s asked, and it’s always there talking back if the driver is asking too much of it. That said, it’s difficult to ask too much from the Evora GT on public roads. 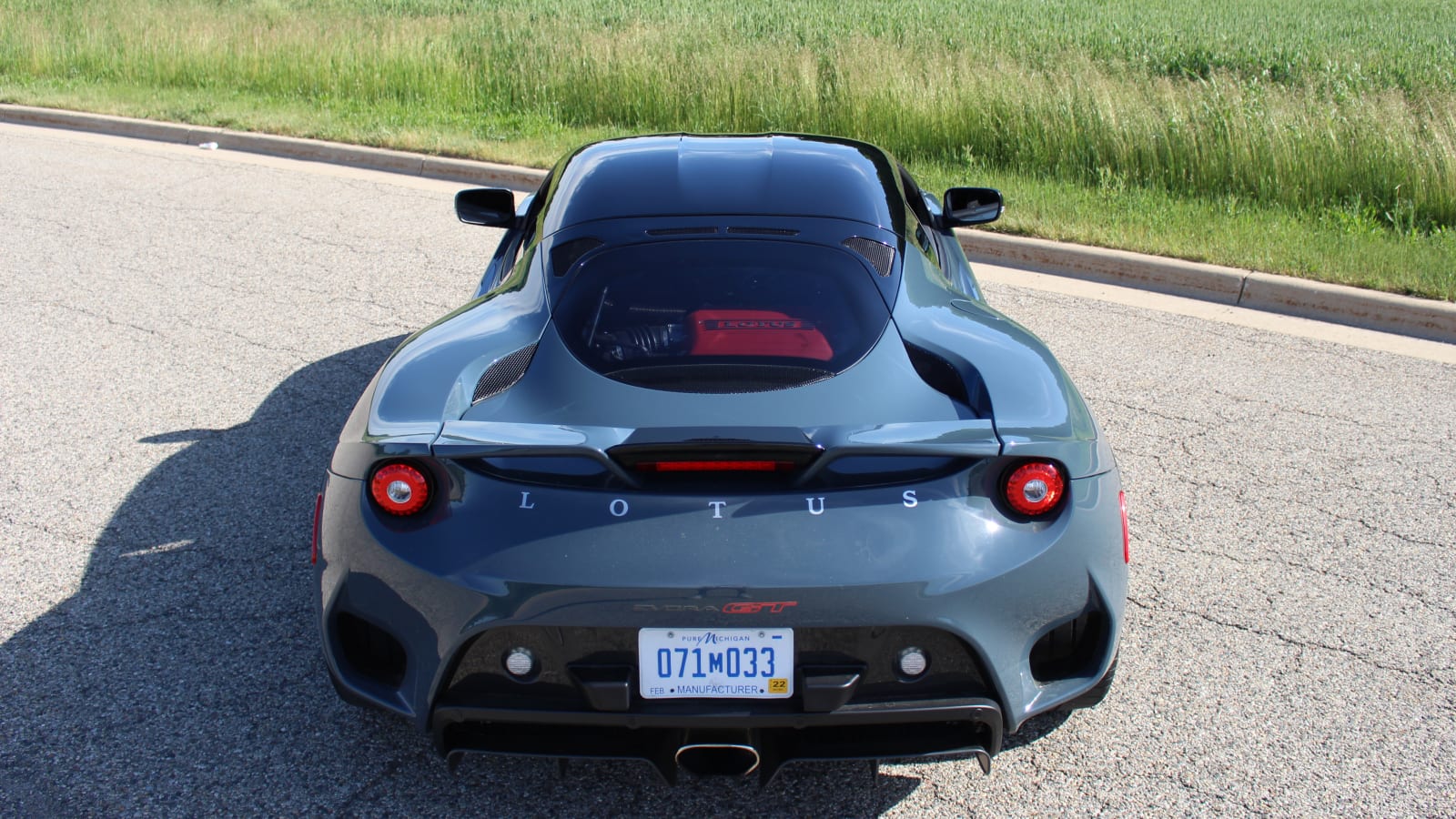 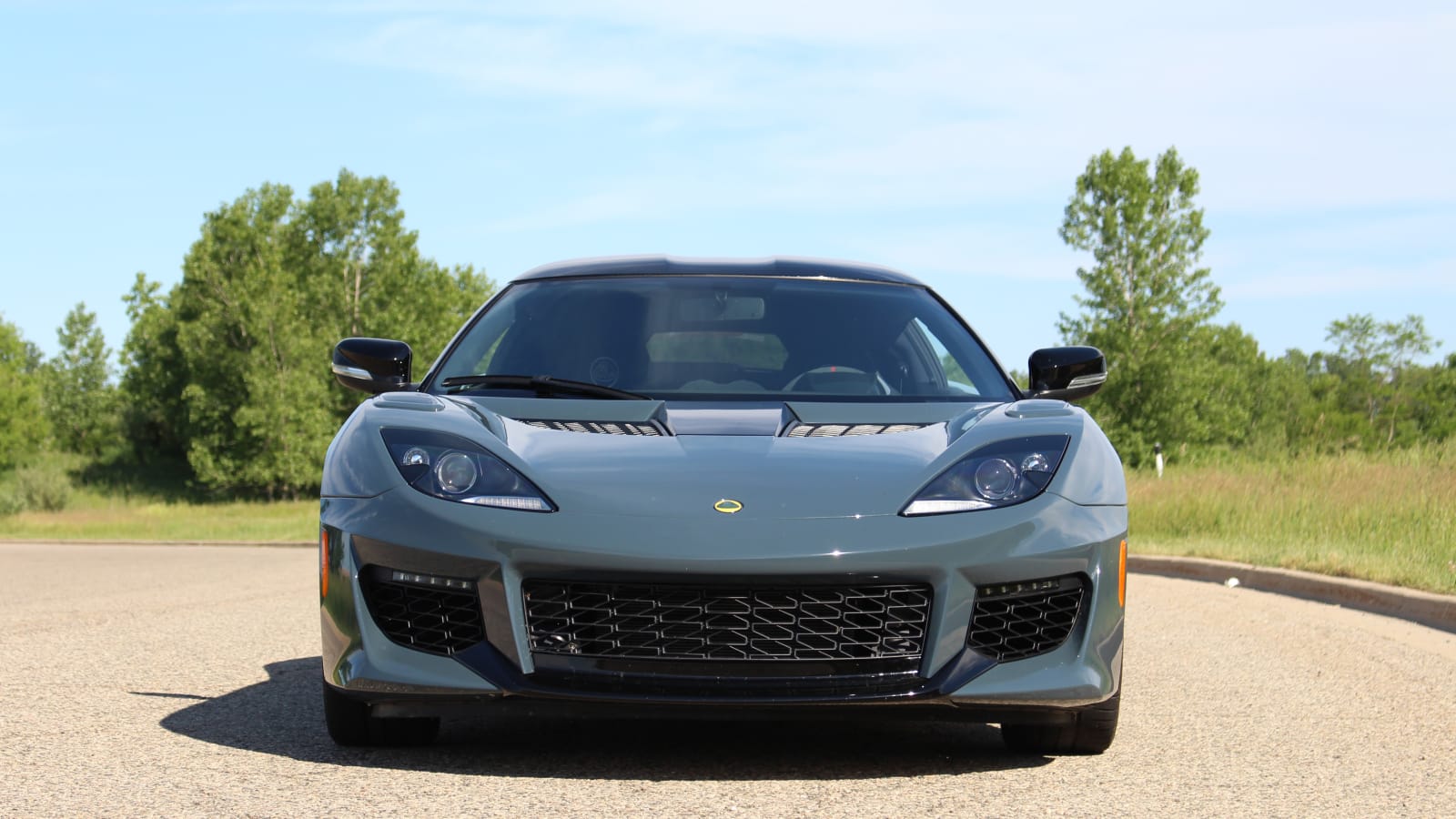 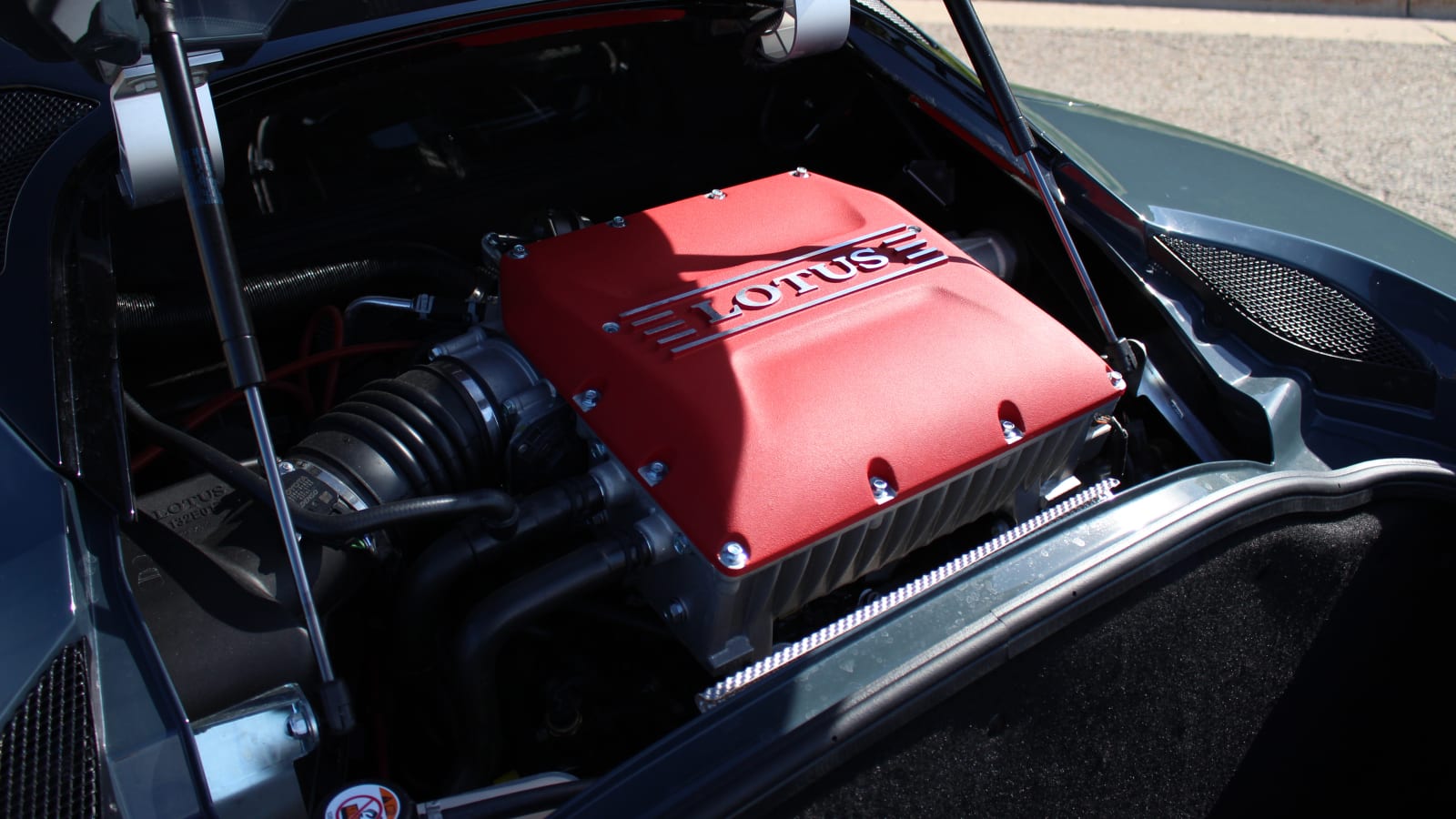 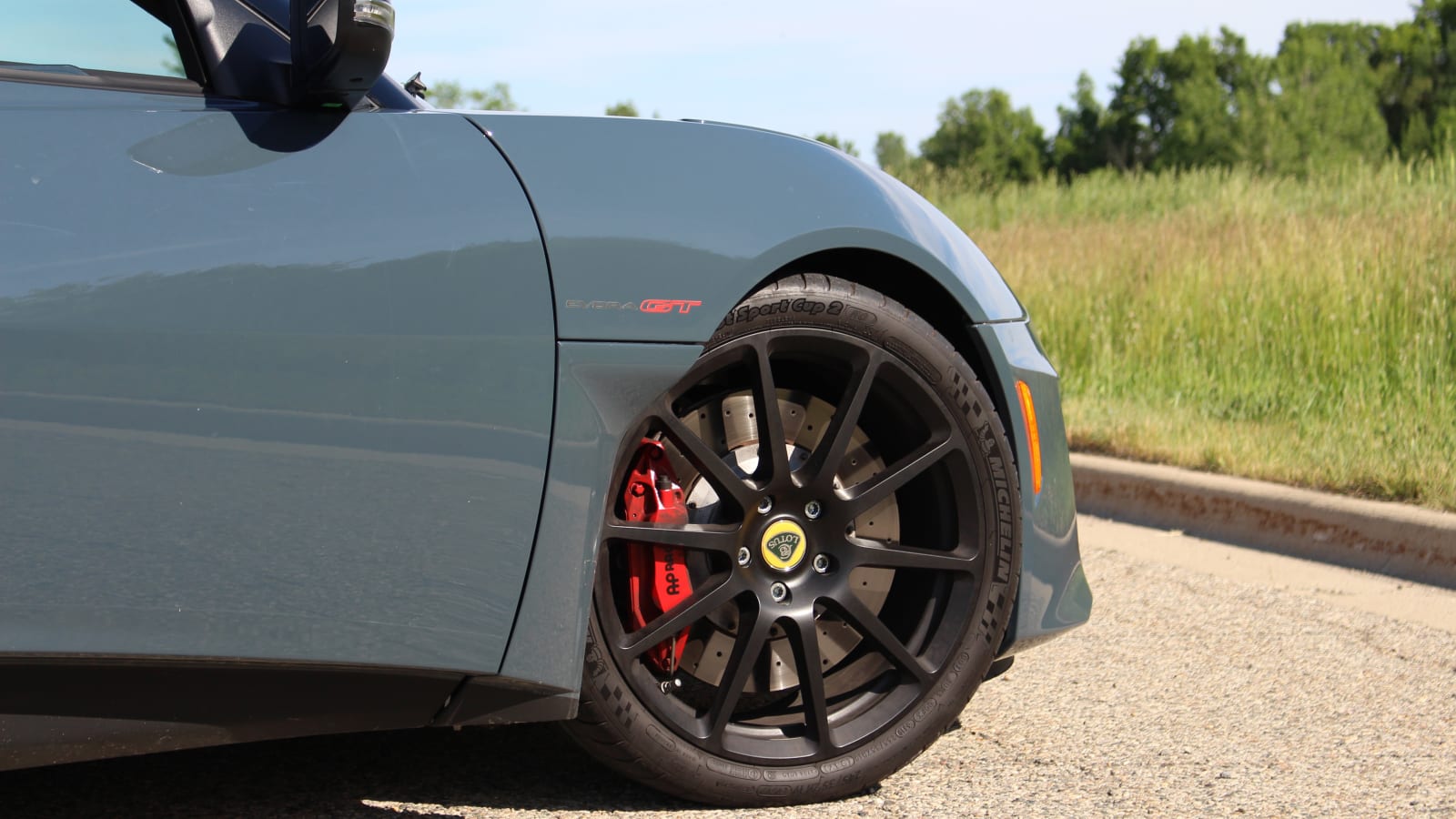 There’s a stillness to the suspension and body in consecutive transitions. It’s ready for any change of direction at any time, and never balks at a quick move. Those Bilstein dampers and Eibach springs are tuned to perfection — don’t even think about changing them. Small body movements communicate the change of direction, but lean is kept to an absolute minimum. Jumping on the AP Racing brakes scrubs speed with spectacular effectiveness. The pedal could be more sensitive higher up in its travel, but it’s firm once past an initial breath on it.

This driving tour de force should totally suck to drive to the grocery store then, right? That’s the worry, but it’s a pleasure to pop around town in, too. Only poorly kept roads are capable of upsetting the ride. An Evora GT is no less unpleasant to casually drive around than a Cayman or Supra. There’s no kit car feeling in the ride, nor are there any huge roadblocks or reasons why one shouldn’t drive their Evora GT to grab some curbside takeout on a sunny, summer evening.

Sunny is the operative word there, because water and this car don’t exactly get along well. One torrential rainfall left us crawling along the highway for fear of aquaplaning with the near-slick Cup 2 tires. The single wiper does a valiant job trying to keep up, but it’s just not as effective at clearing water as those of two-bladed cars. Also, don’t take a Lotus Evora through a touchless car wash, or wash it with any kind of pressurized water. It leaked on both sides where the windows meet the A-pillar on two separate occasions, one by way of a pressure washer, the other by way of a traditional garden hose. Needless to say, this definitely isn’t befitting of a brand-new car in the year 2020, let alone one with a six-figure price tag.

If the local track is a highway slog away, the Evora GT is capable of returning decent fuel economy for its performance. The car’s computer read 24 mpg after one long slog, which isn’t terribly far off from the 26-mpg highway rating. Wind noise from the driver side mirror is plenty audible, but can be drowned out by a shockingly excellent and clean Alpine audio system — plus $500 for the subwoofer and amplifier, but it’s worth the coin. Leave all but the valuables at home, though. The miniature glovebox is the best storage solution for loose items like phones and wallets. Those door pockets are generally useless and are shallow enough that some items just fall out onto the ground when the door opens.

Rear seats typically don’t make it into mid-engine cars, which makes sense given the Evora’s are so small as to be pointless as actual seats. They’re at least more functional for carrying things than the trunk, which sentences whatever you put inside to a hot, tiny crevasse adjacent to the engine. Be careful with what you put back there.

In a nutshell, what Lotus has done is make what a lot of folks thought the follow-up to the original Acura NSX should have been: a raw, mid-engine sports car that’s still entirely livable. Of course, there’s a Lotus badge on this car, so even if the old-school driving characteristics — feel, drama, manual — are there, the Honda simplicity, quality and reliability is not. Lotus isn’t going to sell many Evora GTs, either. A PR spokesperson told us the company hopes to move 400 of them. After spending a week in one, that number just sounds criminally low.

This Airforce Blue Evora GT costs $105,550. For that price, you could get a 2020 Porsche 718 Cayman GT4 , which among its other virtues, has a turn signal stalk that doesn’t feel like it’s been pulled from a 2003 Ford Focus. Forget about that for a second, though. If high-quality plastics and switchgear damping are even part of your decision-making process (not to mention a water-tight roof), the Lotus is not the one. This car is for somebody who wants to have the most intimate and visceral experience possible when waking up at 6 a.m. on a Sunday morning to go for a drive – which will definitely become the new normal. It’s meant to spend its summer weekends at the track, where it’ll be the belle of every ball. Others will look on in envy, but question your sanity at the same time.

Give it a drive before mailing the check to Porsche. The little British outfit in Hethel might just be your kind of batty.

18 hours ago
Biking in the Age of Coronavirus

18 hours ago
Biking in the Age of Coronavirus