The 2020 Ford Escape is completely new this year, riding on a new platform and featuring a heavily revised design both inside and out. The new Hybrid and Plug-In Hybrid models are intriguing, but Ford is also happy to bring the power with a 2.0-liter turbocharged four-cylinder. It’s available on both the SEL and Titanium trims, but we spent our time in the top-of-the-tree Escape Titanium.

Horsepower is up (barely) from last year to 250 horses, and torque is the same 275 pound-feet that it had before. Still, those power numbers are impressive for this segment that’s full of underwhelming acceleration. A 0-60 mph time of 7.4 seconds is quoted from Ford, but you must be running on premium fuel to get maximum performance. The 2.0-liter is mated to an eight-speed automatic transmission and is only available with all-wheel drive. Towing is right at the top of the class, too, coming in at 3,500 pounds. Some of the features you get on the Titanium include leather seats, a Bang & Olufsen 10-speaker audio system and Ford’s highest package of driving assistance equipment.

Before options, our Escape Titanium came in at $37,480. That’s already more expensive than most compact crossovers, but you pay a big premium for the larger engine. It comes bundled with the 401A options package that also includes the Class II Trailer Tow setup for a total of $2,885. Our Escape also had the $1,995 Titanium Premium package, which adds the glass head-up display and panoramic roof. When everything is accounted for, our Escape creeps past the 40K barrier with a grand total of $40,015. For a non-luxury experience, that’s a ton of dough for a small crossover. If you want a completely maxed-out Escape, though, this is the one to aim for.

Associate Editor Byron Hurd: This was my first time behind the wheel of the new Escape, and I came away impressed for the most part. It’s not as refined as some of the competition, but it is sporty and responsive, and seems to have struck a nice balance between cost and feature content.

I spent most of my time behind the wheel thinking of ways Ford could exploit this powertrain to introduce a new ST variant. The steering especially would need some tuning; it’s way too slow as it sits. Beyond that, all it needs is a little more power and a firmer suspension, and we’d be in business.

My only concern with this particular Escape is its interior noise. There’s quite a bit of road noise intrusion, especially. The Chevrolet Equinox we had in the fleet a few weeks ago was quieter and a bit more composed, which made it feel more upscale. In places (like Michigan) where sketchy road surfaces are the norm, I think that’s something shoppers will notice immediately during a test drive. 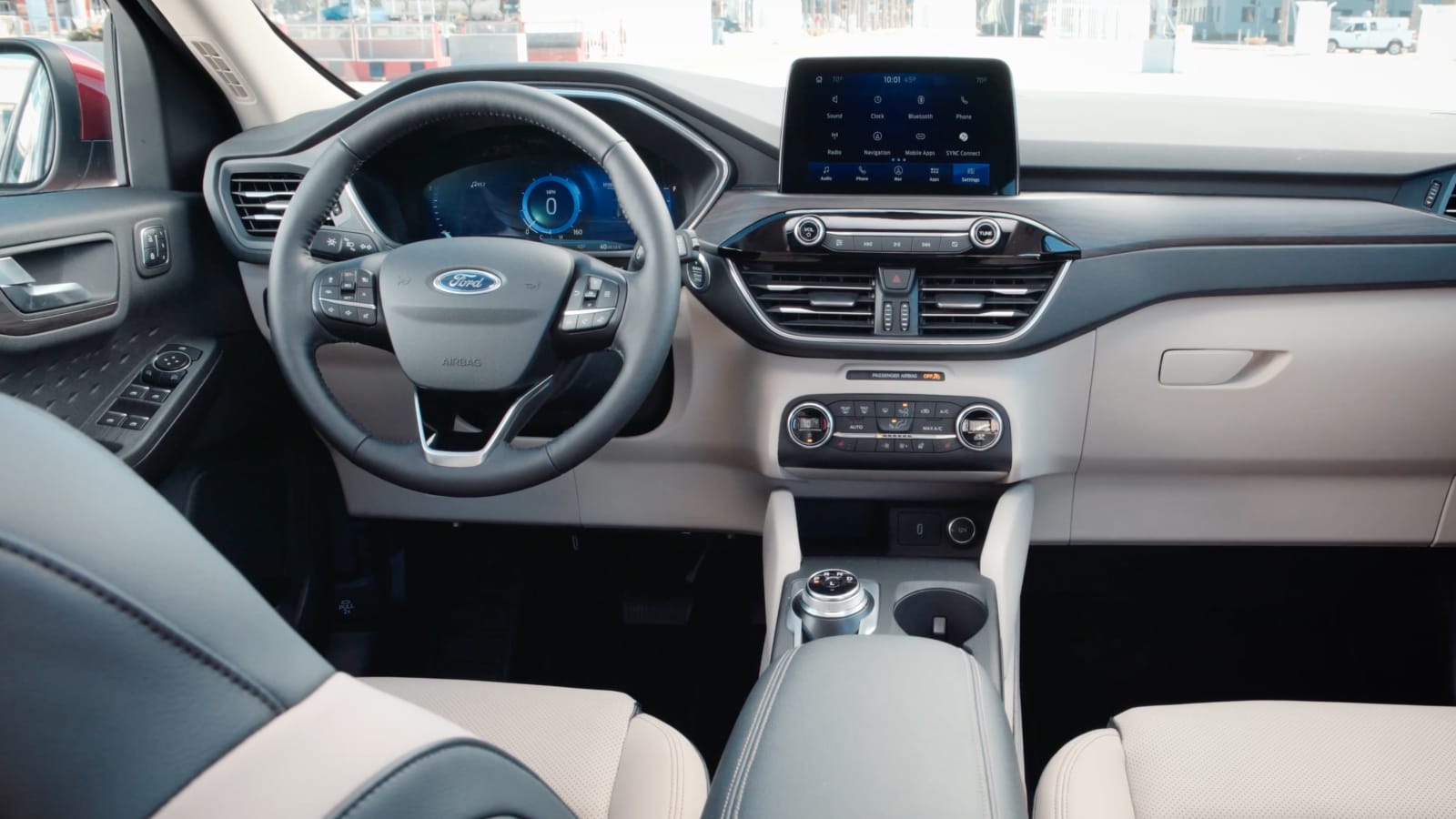 Road Test Editor Zac Palmer: The new Escape in 2.0-liter turbo form is nearly top-of-class when it comes to driving dynamics, but its interior is lacking in refinement, especially in this particular version that costs $40,000. Obviously fake and cheap-feeling wood is stuck to the dash and doors. It’s better than hard black plastic, but not by much. Resting my left foot on the floor of our test car, I could feel a constant vibration when at highway speeds. That was unexpected. There’s some good in here, too. The leather seat is plenty comfortable, and the steering wheel is wrapped in seemingly high-quality leather. I also love the sliding rear seats that also recline to a near-lounge-like angle. My only issue with the rear seats is the lack of thigh support.

I was excited to take a spin through Ford’s latest infotainment and digital instrument cluster tech in this crossover, too. The screens look spectacular. They’re both high-res displays with vibrant colors, a big step up from Ford’s tech in the previous Escape. However, to my disappointment, the screens are remarkably slow and lethargic to respond to inputs for 2020 — other editors found a similar experience in the Explorer ST that just passed through our fleet. That instantaneous response we get from our powerful cell phones and better infotainment systems just isn’t there. Some button presses take longer than others to execute the action, and the cluster itself is rather choppy. It’s a shame, too, because Ford designed some impressive animations to play on the screen. The final product just isn’t nearly as polished as it could be.

First time behind the wheel of the new Escape. It just looks so happy. Comfortable and quick with the 2.0T. The screens look nice, but I wish they were a bit quicker and more responsive to inputs. @therealautoblog pic.twitter.com/I1BcmkLJr7

News Editor Joel Stocksdale: My colleagues have all pretty well summed up my feelings about the Escape. In many ways, it’s one of the best driving crossovers in the segment, but it lacks the final level of polish to make it a class leader. The Escape’s chassis in particular is superb. It’s happy to be flung into corners, and the steering is communicative. It’s not quite as precise as the Mazda CX-5, but it’s close. The engine is peppy, and while it’s a bit buzzy, the volume is low enough to not be annoying. I wish the transmission was a little quicker and smoother, but it does have a smart shift scheduling. Frustratingly, putting it in Sport mode restricts how high you can shift in manual mode.

As Zac said, the Escape’s real problem is the interior. It’s plenty roomy, and visibility is very good, but the materials and designs look and feel cheap. I also found a few pieces of plastic that didn’t fit right, leaving rough, uneven gaps. The infotainment system and instruments have cool graphics, but they don’t have the hardware or optimization to run smoothly and quickly. I personally found the front seats to be too short and narrow with thin padding, making it hard to be comfortable, though not all my colleagues found them to be unpleasant.

Oh, and the price. It is absurd. Especially considering that the Escape’s more luxurious twin, the Lincoln Corsair starts at just over $35,000. It has a vastly improved interior, and it comes with the same peppy 2.0-liter engine as this Escape does. At lower prices, the Escape makes a case for itself, but loaded up, it’s a poor value.

Editor-in-Chief Greg Migliore: The Ford Escape is one of the most anticipated new crossovers of 2020. Ford did a nice job of cleaning up the styling, creating a simple yet curvaceous look that should have mainstream appeal. The last generation seemed overly styled, with a lot of creases and prominent wheel arches. It was a step forward from the boxier look of its predecessors, but subtle, elegant design with a few flourishes — like the 2020 Escape’s grille and stretched headlights — is en vogue now.

The Escape also handles well, driving smaller than it is, and offers a range of powertrain options and trims. I don’t think I’d pop for an Escape in Titanium trim, as you end up north of $40,000 with a few options. In that situation, I’d skip ahead to a lower-spec Explorer. Or like Joel says, check out a Lincoln. The value, along with its middling interior, also hampers the Escape. I was reasonably content with this vehicle’s cabin — then I discovered the price. Still, in its segment, the Escape is newly competitive and attractive.