The funny thing about buying a pickup truck in off-road-ready trim, and adding an even more rugged off-road package on top of that, is that most of us will rack up 99 percent of the truck’s miles on pavement. So, it’s a good thing the technology that makes the 2020 Chevy Colorado ZR2 Bison an outstanding trail runner also happens to make it a pleasant pickup to drive on the highway.

And that’s as it should be, since pavement — Formula 1 race tracks, actually — is where this truck’s capabilities were born. The Colorado ZR2 is kitted for mud, dirt, rocks and snow, with DSSV Multimatic spool-valve shocks as the centerpiece of the setup. And that suspension technology was handed down from race cars to performance production cars such as the Ford GT, Mercedes-AMG GT and Camaro ZL1 1LE, and finally, to this truck. Multimatic put triple damper units on the Colorado then fine-tuned the setup using analytics and software also developed through racing.

The ZR2 got these babies a few years back, which is when our James Riswick did this deep dive into how they work. 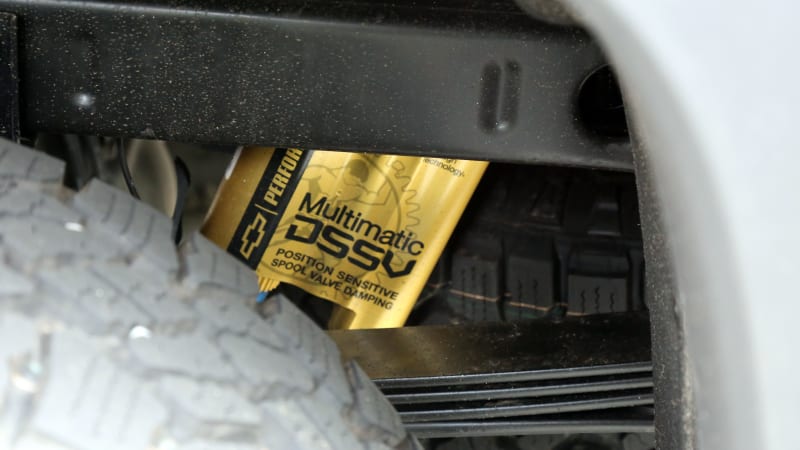 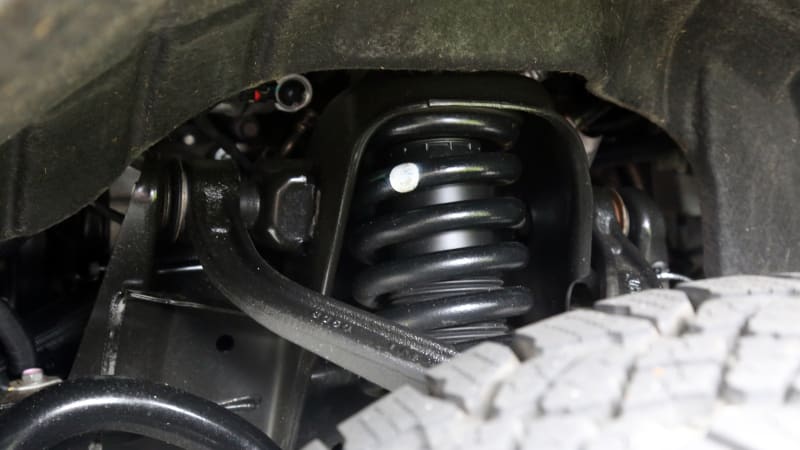 But then along came American Expedition Vehicles, which in 2018 trotted out the Bison to further bulk things up. AEV and Chevy packaged a laundry list of goodies a ZR2 buyer might add in the aftermarket.

First, the standard 3.6-liter gasoline V6 goes away, and the $3,500, 2.8-liter Duramax inline-four turbodiesel takes over, making 181 horsepower and a bullish 369 pound-feet of torque. An upgrade six-speed automatic and 3.42 rear axle ratio join it. Then another $5,750 in options get added on, starting with five skid plates to protect the engine pan, fuel tank, transfer case and differentials. There’s an exhaust brake and dark gray 17-inch wheels, and the ZR2 bumpers get replaced by AEV designs with slightly improved approach and departure angles (30 and 23.5 degrees). There are rock rails all around. Fat black cladding bulges from the wheel arches, though there is a prominent scallop in the plastic around the fuel filler door that catches your eye every time you look in the left-hand mirror.

Finally, there’s AEV Bison badging all about, including some cool Bison logo headrests. They’re the standout feature in a same-old lackluster Colorado interior. 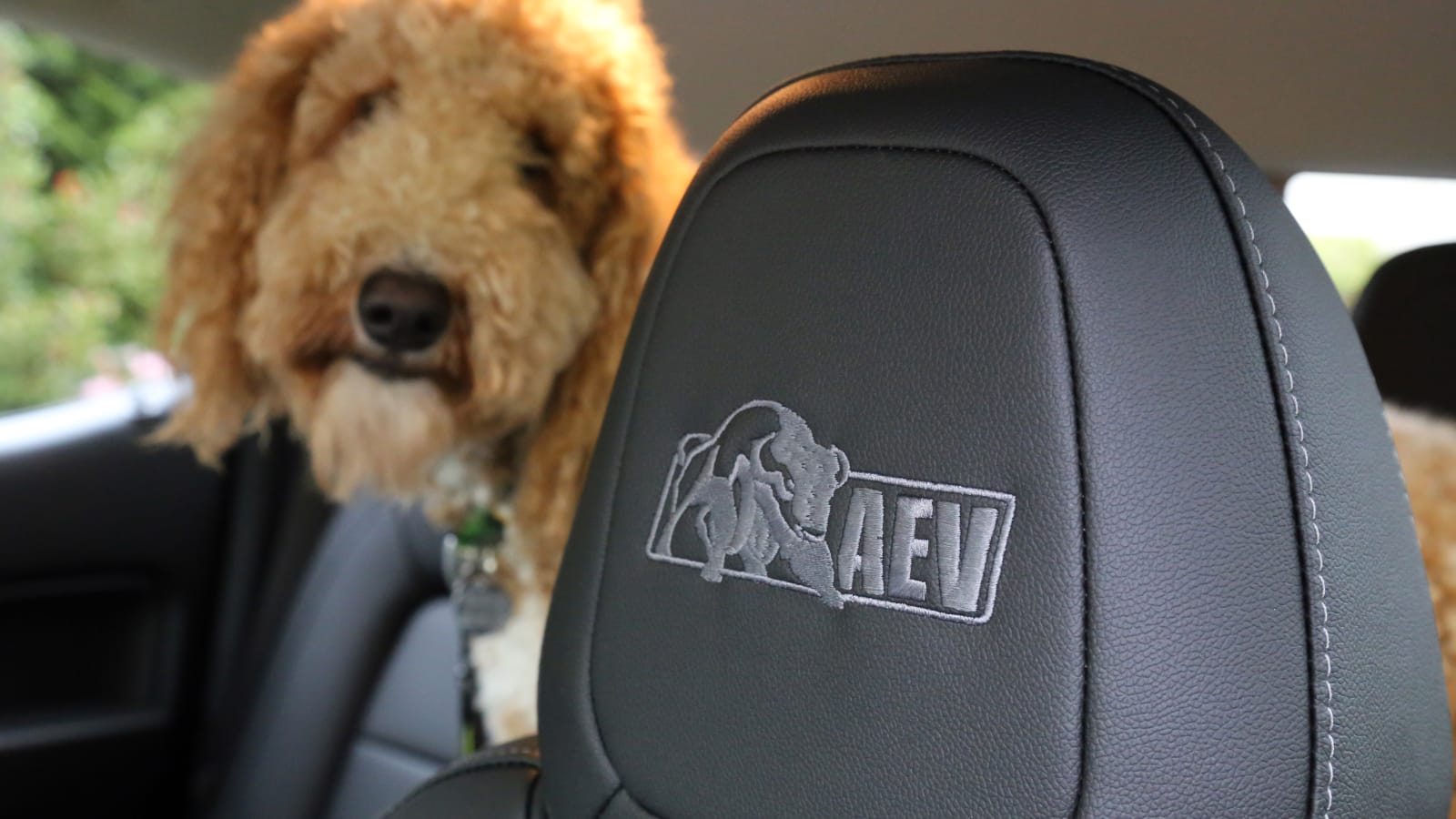 All in, the truck as tested stickers for $53,345. With bold looks, brawny components and a boron-steel underbelly, it looks like it can take a back-country beating. The trouble was this: In soggy early March in Western Washington, where do you take a vehicle like that? The nearest official state off-road playground was an hour north and offers 36 miles of trail through 3,200 acres with 2,600 feet of elevation gain. It also sounded like a place of serious intent — a more challenging environment than I should, in good conscience, tackle in a shiny new loaned vehicle without taking along recovery equipment. Not doubting the truck’s capabilities, just my own and the timing. And there is no shortage of badly potholed and washboard-scarred forest roads in the Cascades, but most were still closed off for winter with snow, which again raises the issue of not being adequately equipped.

I finally settled on heading to a couple of low-elevation forest roads unlikely to have snow, nor visitors yet. So I loaded my decidedly non-macho dog in this macho truck, fired up the Duramax, and headed out to give the pup a romp in the woods and enjoy some social distancing. The truck’s high, and the door opening’s low, so climbing in involves both stepping up and ducking down. But once in, the driving position’s not bad even though the seat is kind of low.

The ride en route to the foothills was serene. That’s not a word you use much when talking about pickups. Jolting, jarring, rattling, shimmying, clattering are your typical trucky words. But the ZR2 Bison glides down the interstate. The Bison abides. You get some unavoidable tire noise from the Goodyears, but otherwise the cabin is quiet and the truck’s suspension soaks up any imperfections that city or highway pavement can offer. The other nice thing about a Colorado in general is that it’s right-sized — it doesn’t fill the lane the way a full-size pickup feels. Which makes it more relaxing to drive. That said, the Bison sits taller in traffic than many full-size pickups. 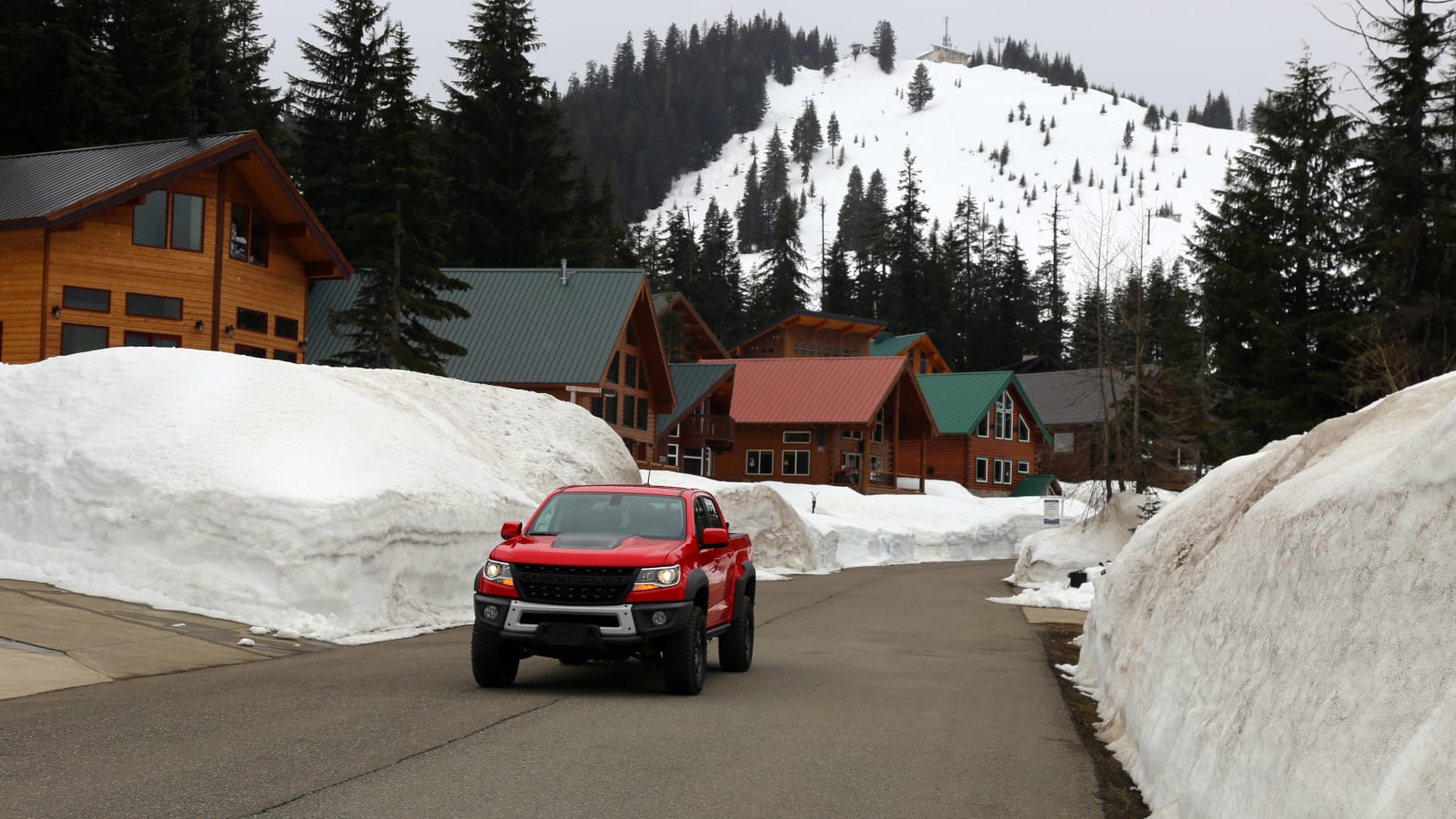 Once off I-90 and tearing up a muddy rutted service road at some speed, the Bison floated above the undulations in the soft surface. It was like driving a pillow. Crossing to the other side of the highway exit, I turned up a forest road leading to the trailhead for a lake hike. The gravel surface was, disappointingly, better than you’d expect emerging from winter, practically as smooth as pavement in places. But when steered through, rather than around, potholes, the truck banged nonchalantly over the craters and danced over rock-studded road surfaces that would have been bone-jarring in a normal vehicle. Washboarded slopes barely slowed us down.

By the time we got down and home, the truck indicated 24.2 mpg overall, 30.1 on the highway portion. The truck is rated at 18 mpg city, 22 mpg highway and 19 mpg combined (versus 16/18/17 for the gas V6), so our figures were either a mileage miracle or the mpg-calculating circuitry has its thumb on the scale.

As Northwest backcountry roads go, this was practically a superhighway. An axle-breaking primitive “road” to a remote vacation rental on Salt Spring Island still stands as the worst I’ve traveled, compounded by the fact we were in a Volvo station wagon. It was an 11-mile trek, made longer by weaving to avoid encroaching tree roots and car-killing craters. We later learned that most people accessed the house by boat.

This quick spin in the ZR2 Bison was no match for the truck’s special capabilities, such as the lockers, hill-descent control or the deep pulling power of the Duramax. We traversed a much rockier road during our first-drive review of the Bison, if you want to check that out (video below). But the truck did this outing with aplomb, and left no doubt that it’s capable of so much more, such as the kind of overlanding/road trip Alex Kierstein and our video team took, 1,600 miles from Seattle to Banff, a couple of summers back (also below). If a Toyota Tacoma TRD Pro can do it, the ZR2 Bison can, too.

Until then, even if you’re just commuting or loading up the Bison with beauty bark, you’ll have the smoothest truck in town.