The 2020 BMW X6 M50i is just one rung down from the full-fat BMW X6 M. Of course, a 5,000-pound-plus SUV may not be what you think of when BMW M comes to mind, but BMW is out to change a few minds with this coupe-like crossover. The X6 is completely new for the 2020 model year, adopting many of the features, styling touches and powertrains from the still-new and more traditionally-shaped X5. There’s an M50i version of the X5, too, but we’re focusing on its slick and less practical sibling.

Specially, the M50i, which has BMW’s powerful 4.4-liter twin-turbo V8 that makes 523 horsepower and 553 pound-feet of torque. It’s not the most powerful version of that engine, but it’s more than enough in a vehicle this big. BMW pairs the torquey V8 with the smooth ZF eight-speed automatic, and since it’s the M50i, it also gets the M Sport exhaust as standard equipment. There isn’t much debate in the office about the engine (it’s fantastic), but there’s plenty of controversy surrounding the styling. BMW kept the same general shape as the X6 before it, but it’s different enough to warrant a re-evaluation of the SUV coupe argument. When compared to the X5, an X6 loses 6.5 cubic-feet of cargo space behind the second row and 12.7 cubes when the second row is folded flat. That’s a significant loss, but the bigger loss is in practical room, as the X6’s cargo area isn’t as square and luggage-friendly as the X5’s is. There’s also more rear legroom in an X5 (1.7 inches) and more rear headroom too (1.2 inches). With those compromises in mind, we’ll shift to pricing.

The base price of a 2020 BMW X6 M50i is $86,645, but ours stickered at $99,645 after options. Good work keeping it under six digits, BMW. For $3,350 we got the “Full Merino Leather,” ensuring that most surfaces were covered by the especially high-quality BMW leather. The $2,600 Dynamic Handling package added the adaptive suspension, active anti-roll bars and four-wheel steering. The $1,700 Driving Assistance package added BMW’s traffic jam assistant and the “Active Driving Assistant Pro” that’ll take over completely at low speeds. A Premium Package for $1,250 adds remote engine start, a head-up display and gesture control. Appearance-wise, ours had $1,900 22-inch M alloy wheels and the $500 illuminated kidney grille. Nearly $100,000 is a lot of coin to spend for a crossover, but at 4.1 seconds to 60 mph, there’s a whole lot of performance that comes along for the ride. 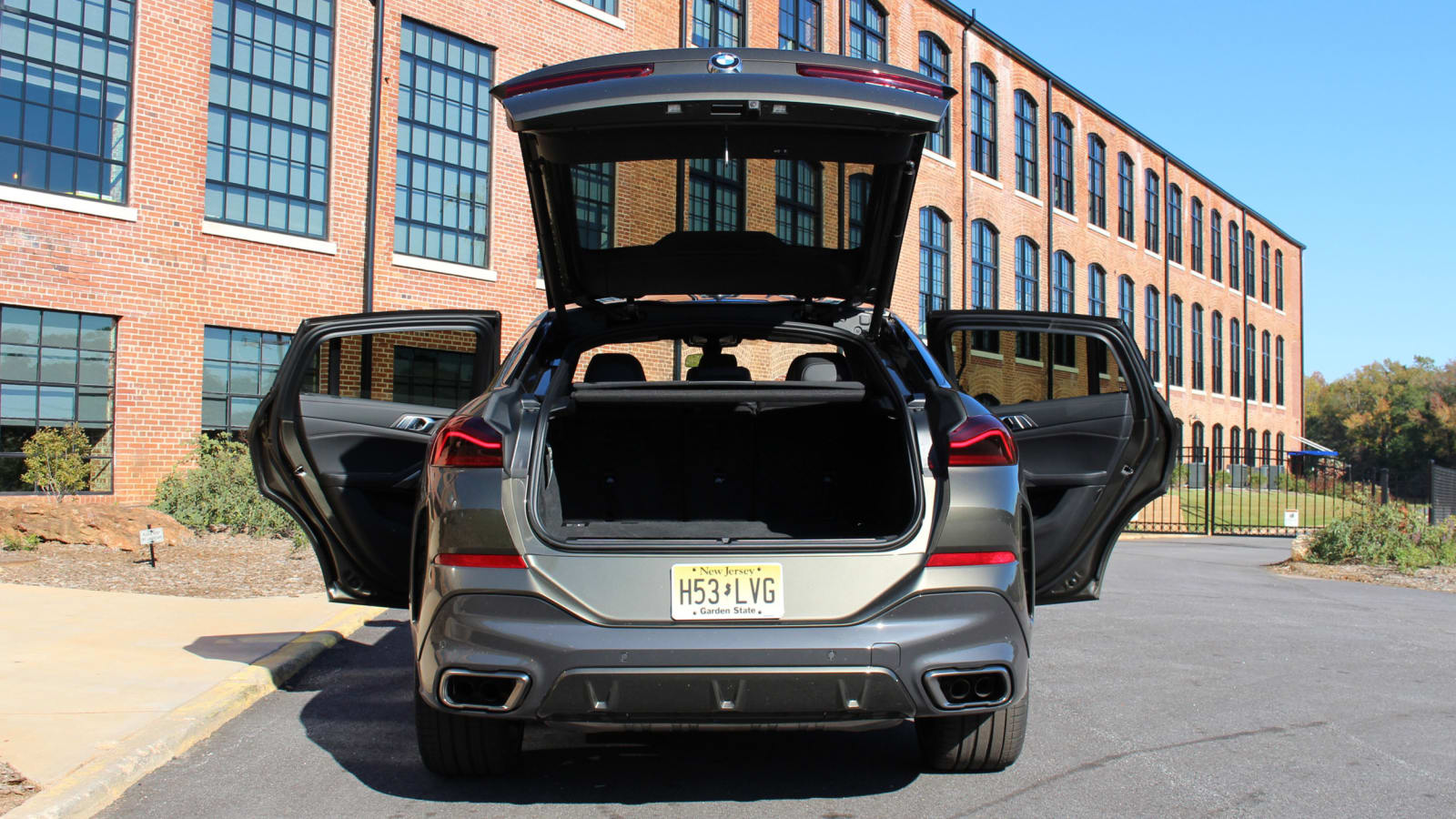 Associate Editor Byron Hurd: This was my first time in BMW’s sport “activity” coupe, and I had mixed feelings. The handling and steering are fantastic for something of this size, but I was constantly reminded just how big “this size” actually is when trying to do simple things, like get in and out of my narrow driveway.

Get it out on the road, though, and the X6 really shrinks around you. BMW did a fantastic job of making it feel like a sport sedan (or coupe, or whatever we’re supposed to call it) despite the heft and dimensions. It feels nimble and composed — sharp, really — but it had me constantly worried that I was cutting it close turning right at intersections. I had to second-guess pretty much every tight maneuver, and even after I thought I had it down, I still managed to find the edge of my own driveway more than once.

BMW’s camera system is supposed to make this all a little easier to deal with, but the overlay lines actually obscure a lot of outside details, especially at night, making reversing a bit more challenging in poorly lit areas. Add in road grime, and the view gets even foggier.

None of this detracts from the X6’s ultimate capability, but it did make me question its practicality. Who are we kidding, though? Nobody who buys an X6 cares much about being practical.

Senior Editor, Green John Beltz Snyder: A lot of people rag on the X6 because of its shape. Either they don’t like the way it looks, or they point out the reduction in usable cargo space due to that tapering roofline. I’ll go out on a limb here and say I don’t mind either. I’ve always liked the way the X6 looks — I kind of have a thing for odd-looking vehicles, I’ll admit — and I feel like the X6 has come into its own over the years. As for the cargo area, I found it perfectly usable for my normal day-to-day errands, which included grocery shopping and taking the large son to soccer. No, I wouldn’t want to move apartments in it, but paper grocery bags fit at the outer edge just fine, and there’s even more height closer to the rear seat’s back.

At one point I passed another X6 heading in the opposite direction. I regret not noticing it until it was too late, as I would’ve liked to have seen if X6 drivers interact with one another on the road the way Wrangler, Mini or WRX drivers do. I feel like it’s a strange enough vehicle that the owners would possibly forge some sort of bond that they could indicate in passing.

If you’re a regular reader, you may have noticed my affinity for the 32-ounce Nalgene water bottle. In previous Drivers’ Notes, I’ve documented the joy I experience when it actually fits in a car’s cupholder, and the heartbreak when it doesn’t (it’s the simple things …). In the X6, it fits in the door. Not as ideal as fitting in the center console, but I’ll take it.

Cons:
– You have to lean forward to reach it
– I kept forgetting where I put it

Pros:
– Hey, it fits
– Easy to remember it when leaving the vehicle pic.twitter.com/RyG0hgBN7W

I love the reply to my tweet that just says, “There is so much about that tweet I hope I never understand.” Fair enough.

News Editor Joel Stocksdale: I have a lot of gripes about modern BMWs, but the powertrains are never among them. The engines and transmissions the company uses are some of the best in the business, including this M50i’s 4.4-liter twin-turbo V8. It’s so smooth it seems frictionless, and it utters a rippling V8 noise. The transmission it’s bolted to is just as silky, and it cracks off shifts at an instant, either by its own decision or by a pull of the paddle. And of course, this combination will hustle the big X6 about quickly.

It’s just a shame that the rest of the X6 is average at best. Certainly, the chassis is solid and you can run it around corners with quite a bit of speed, but it doesn’t feel particularly rewarding. The main culprit is the steering. You can’t feel a thing through it, and the weight doesn’t build progressively.

The interior is also typical BMW. It has decent materials, and the layout is fine, but it feels uninspired. It’s like BMW is just going through the motions, and that doesn’t cut it in a world where Mercedes, Audi and Lexus are pushing the limits of interior design and driving dynamics.

3 days ago
Biking in the Age of Coronavirus

4 days ago
Fernando Alonso returning to F1, back with Renault

3 days ago
Biking in the Age of Coronavirus

4 days ago
Fernando Alonso returning to F1, back with Renault