The 2020 BMW X5 is a mid-size SUV that delivers luxury and performance in a segment that’s chock full of both. It was completely redesigned for the 2019 model year, bringing it up to date in every aspect. Unlike previous X5‘s, however, the current version is far from being the athlete of the segment. Today it prioritizes comfort, quiet and refinement while still offering blistering performance and handling that’s poised if not exactly zesty. It should strike a just-right balance for many luxury shoppers and for those still seeking a high-performance luxury SUV, the X5 M50i and X5 M are now available for those who want them.

The 2020 X5 is also a technology tour de force, boasting nearly every infotainment goodie in BMW’s bag plus standard accident avoidance features and advanced driver assistance technology. The Mercedes-Benz GLE is still the high-tech master of this class, but the new X5 isn’t far behind. As it’s always been, the X5 is a must-drive for anyone seeking one of the finest five-passenger luxury SUVs.

BMW didn’t change much for the standard versions of the X5, but we did get some fantastic new high-performance trims: the X5 M50i and X5 M. The M50i adds a more powerful 4.4-liter twin-turbo V8 engine that makes 523 horsepower and 553 pound-feet of torque — that’s 67 horsepower and 74 pound-feet more than the regular xDrive50i. The real catch is the X5 M, which ramps things up to 600 horsepower. If that’s not enough, the X5 M Competition makes 617 horsepower.

BMW says the X5 xDrive45e plug-in hybrid will go on sale at some point this year, but there’s no hard date on that model yet. It will be equipped with a 3.0-liter turbocharged inline-six and paired to a single electric motor, producing a combined 394 horsepower and 443 pound-feet of torque. Final all-electric range numbers aren’t available yet, but it’s expected to go much further on a full charge than the previous X5 plug-in that was rated for only 14 miles.

The X5’s cabin is less austere than has been typical from BMW, boasting a snazzy design with ritzy materials that de-emphasize buttons in favor of large swaths of wood, the huge iDrive display and more interestingly shaped center air vents. The X5’s Mercedes GLE competition in the past has often seemed more overtly luxurious inside, while Audi’s Q7 could seem more high-tech – the 2020 X5 successfully meets them in the middle.

As is typical for this lofty segment of luxury SUVs, you can outfit the X5 in a truly opulent manner with things like a leather-wrapped dash, heated just-about everything (front and rear seats, steering wheel, armrests and cupholders), a 20-speaker Bowers & Wilkins sound system, fancier leather upholstery, multiple choices of wood trim, metal weaves, and glass finishings on center console controls. With the latter, you can make the electronic shifter look like a sort of crystal talisman from a fantasy novel.

As for technology, make sure to set aside lots of time during a test drive (and delivery, if you buy one) to learn about the innumerable features and customization settings controlled by iDrive. This isn’t a car you just hop in and drive away. Everything from the way the gauges look to your preferred combination of powertrain and chassis settings can be programmed the way you like it. Opting for an X5 M only adds to the customizability of the driving experience. Plus, this latest iDrive can be controlled through a multitude of different means: the center console knob and surrounding capacitive menu “buttons,” the touchscreen, natural voice commands akin to Amazon Alexa, or the rather useless gesture control (wave your hands about to accomplish tasks). We found we liked to accomplish different tasks using different means of interface, which speaks to the value in such control redundancy. 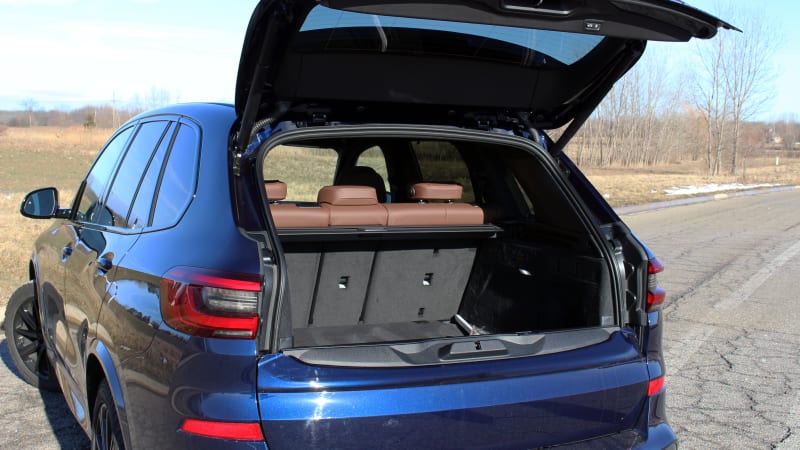 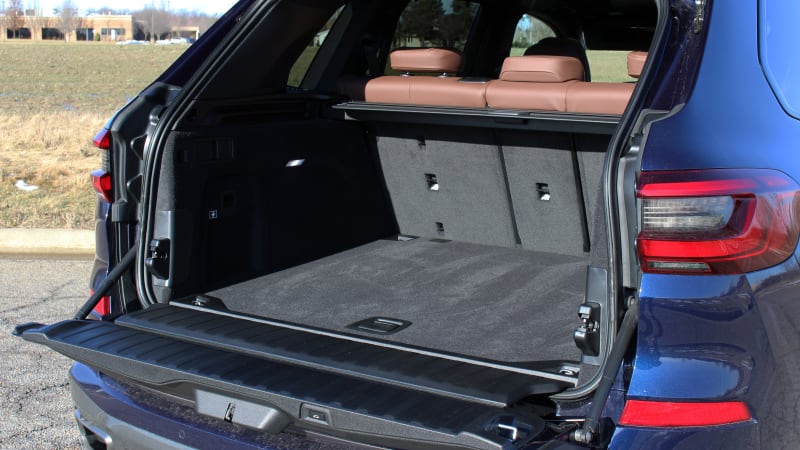 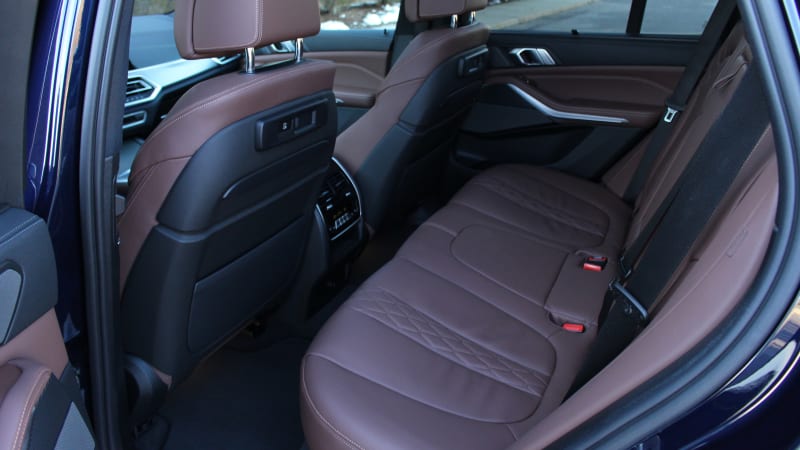 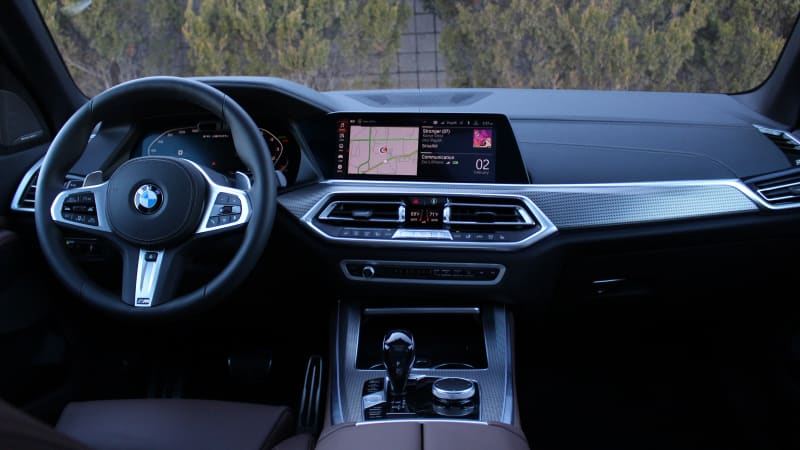 How big is it?

The X5 is a midsize SUV that seats five people in two rows. That configuration, along with its general exterior dimensions, makes it consistent with a Mercedes-Benz GLE-Class (it has the exact same length), Porsche Cayenne and Audi Q8. The Lexus RX 350 is also within spitting distance of this group, but costs much less. Inside, the specs would indicate that the X5 has less rear seat legroom than these competitors, especially the more passenger-focused Q8, and in person, we found it doesn’t exactly provide the sprawl out space you might expect from a high-dollar SUV. The seat back also doesn’t recline. Head room in the rear is abundant, however, and shoulder room is typical for the segment, meaning fitting three across shouldn’t be an issue.

Now, while rear passenger space is just OK, cargo space is among the best in the two-row segment. It grossly outpaces the Q8 and RX, which are compromised by raked rooflines, as well as BMW’s X6 “coupe” sibling. BMW beats the Cayenne, but we don’t have specs yet for the new GLE — we suspect the X5 is better, be it with the rear seat raised or lowered. It also features a distinctive cargo opening: a power-operated liftgate and tailgate combination. This allows you to access things inside without fear of those things rolling out when you open the tailgate. It also creates a nice, clean place to sit. On the other hand, opening and closing is a two-step process. 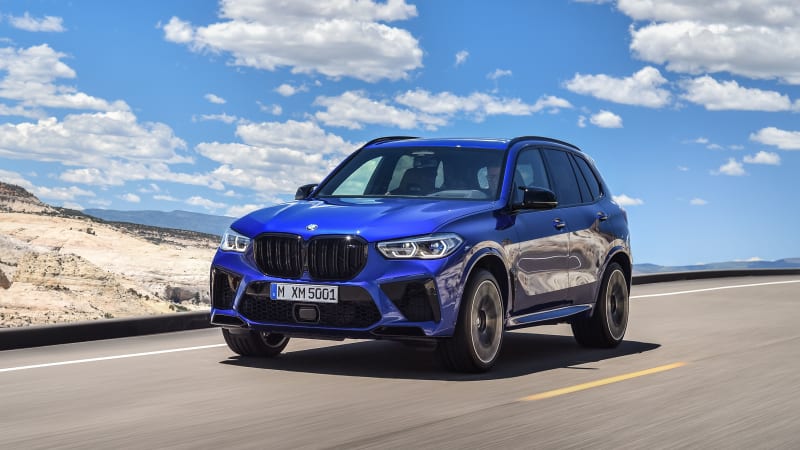 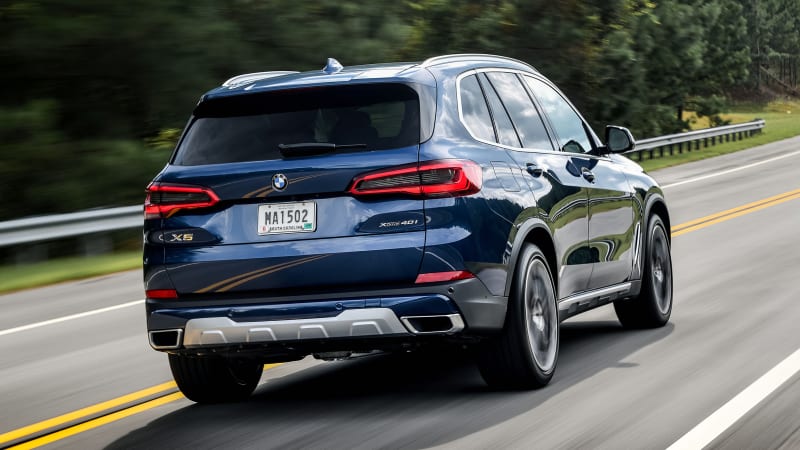 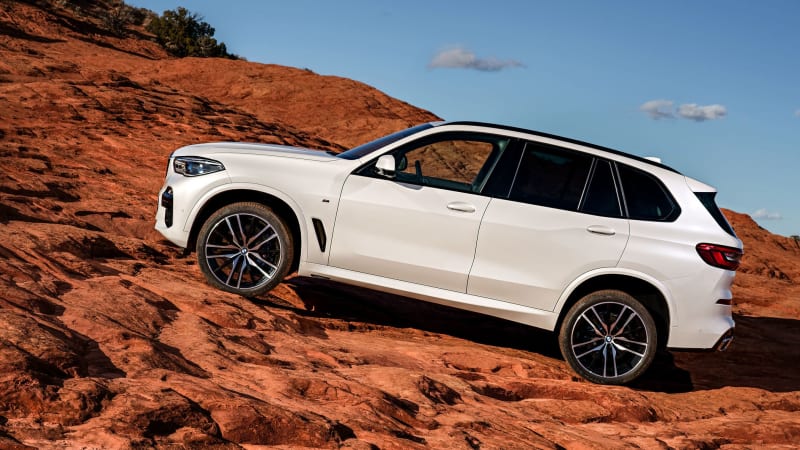 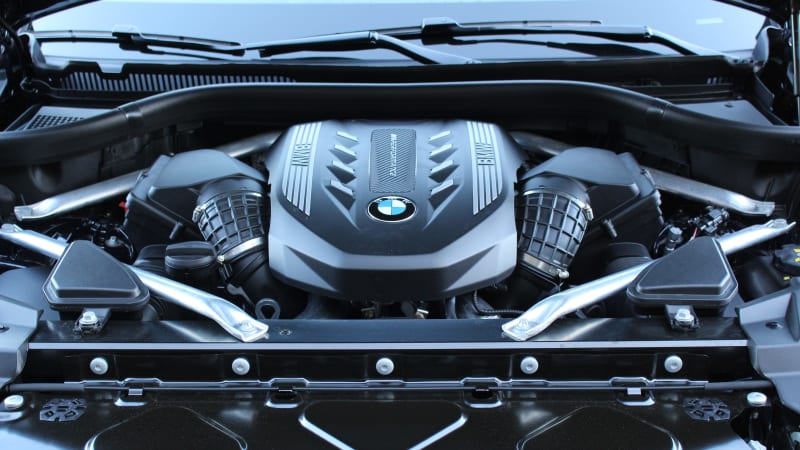 For 2020, there are multiple models to choose from that correspond with different engines. We’ll start with the basic non-M versions: sDrive 40i, xDrive40i and xDrive50i models.

The sDrive40i and xDrive40i both have a 3.0-liter turbocharged inline-six that produces 335 horsepower and 330 pound-feet of torque. Like nearly every X5, it has an eight-speed automatic. The sDrive40i is rear-wheel drive, while the xDrive40i is all-wheel drive. BMW estimates that the xDrive40i goes from zero to 60 mph in a quick 5.3 seconds, and the sDrive40i does it in 5.2 seconds. EPA-estimated fuel economy is 21 mpg city, 26 mpg highway and 23 mpg combined for the sDrive40i, which is pretty good given the X5’s size and performance. The xDrive40i brings that down to 20/26/22.

Rounding out the X5 lineup is the X5 M and X5 M Competition. The X5 M produces 600 horsepower and 553 pound-feet of torque, while the Competition version makes 617 horsepower and 553 pound-feet of torque. An X5 M gets to 60 mph in just 3.8 seconds, and the Competition drops that to 3.7 seconds. With the M Drivers’ Package, top speed is 177 mph. A bevy of high performance goodies are added in addition to the extra power: an M specific exhaust system, BMW’s M xDrive all-wheel drive system with a greater rear-drive bias, stiffer suspension, more chassis bracing along with M compound brakes and performance tires, all designed to perform on the track. Fuel economy is 13/18/15 for both, which is as terrible as you’d expect for a 617-hp SUV.

The X5 is soft, quiet and buttery smooth around town or on the highway, feeling impeccably engineered to make you only mildly aware of your surroundings. Despite riding on 20-inch wheels and run-flat tires, our X5 test car softened the impacts from potholes with expert dampening from the available height-adjustable air suspension. We’d suspect the standard adaptive suspension would be pretty exceptional in this regard as well.

When you start to hustle the X5 along, however, there’s a poise and sophistication to the way it takes corners that you wouldn’t expect from something so comfy the rest of the time. Selecting Sport or Individual tightens the steering, suspension, transmission and throttle response accordingly. The height-adjustable suspension even lowers itself in Sport. If anything, the Sport Plus setting is almost too firm as to be unpleasant on anything but pristine pavement. Bumps can actually unsettle it a bit through corners, much like other firmly sprung cars are wont to be. This breadth of driving feel is actually quite extraordinary.

Unfortunately, the steering is not, and it’s our main dynamic complaint with the X5. Like in other BMWs, there just isn’t enough feedback regardless of the drive setting you’re in. While the chassis tells you how athletic it is through the seat of your pants, the steering can’t break free from that foam layer. The Integral Active Steering, which adds rear wheel articulation, doesn’t really help in this regard, but does make for a tighter turning circle.

As for the engine, power from the base turbo inline-six is abundant and silky smooth. The turbo V8 in the xDrive50i is just indulgent. Driving the xDrive M50i is indulgence piled higher. All 553 pound-feet of torque hits like a freight train the second we put our foot down. Acceleration is linear and hardly interrupted by shifts, as the eight-speed automatic swaps cogs with impressive speed. Handling is also improved in the M50i, but the ride is still buttery-smooth and compliant in Comfort mode. There’s enough performance from all facets in the M50i that we question whether or not the X5 M is even necessary. We haven’t gotten behind the wheel of the X5 M or X5 M Competition yet, but we’ll update this review after spending some time in BMW’s highest performing X5.

What more can I read about the BMW X5?

Our first driving driving impressions of the new X5, including more details about what was new and different about this completely redesigned, fourth-generation version. 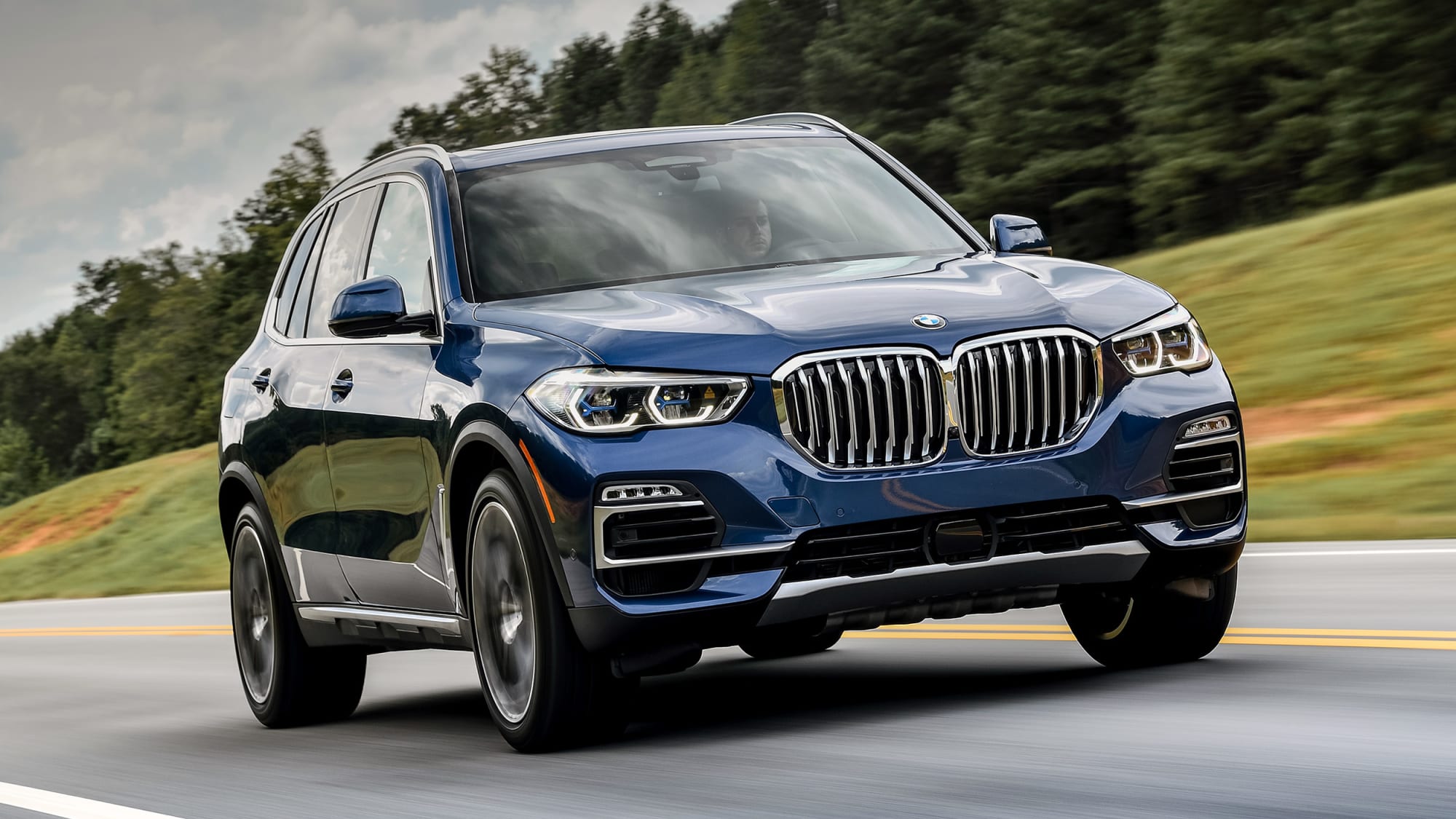 We get the X5 back to our Michigan headquarters for a more complete test drive. It proved a bit controversial, especially the steering. 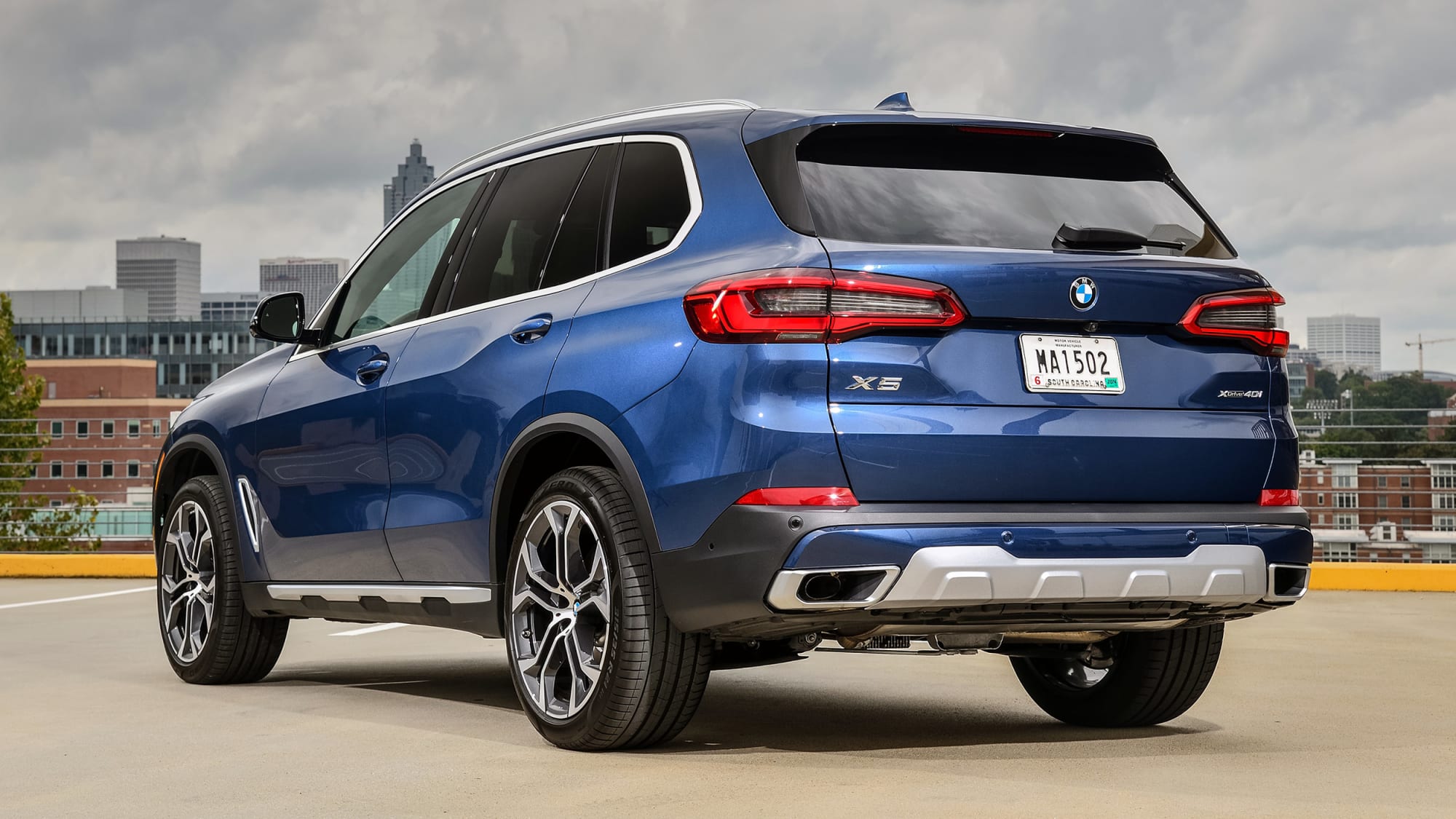 Besides its bigger engine, the xDrive50i includes items otherwise optional on the xDrive40i, including upgraded “Comfort” seats, four-zone climate control, and a 16-speaker Harman Kardon sound system with satellite radio. There is a multitude of packages and stand-alone options available.

Check out our more complete breakdown of features, options, specs and local pricing here on Autoblog.

The X5 has received a Top Safety Pick+ award from the Insurance Institute for Highway Safety for its best-possible performance in all tests but one: its base headlights got a “Poor” rating, which is typical. It also received a four-star overall crash rating from the government, including a four-star frontal rating and five-star side rating.