This will not be one of those “meet your heroes” types of retro car reviews. There was no poster of a 1999 Honda Civic Si on my wall, and it certainly wasn’t on the shortlist (or even long one) of contenders for my first car. Yet, with a closet full of car magazines and a drivers’ license about to be acquired, I do quite vividly remember the Civic Si coming out and the rave reviews it received. And frankly, I didn’t get it. It had only 160 horsepower, the interior of any old Civic, and I distinctly remember thinking the omission of ABS was absurd. Admittedly, the Electron Blue Pearl paint was pretty cool.

Smash cut to 21 years later, and there’s a ’99 Civic Si in my driveway, looking exactly like the ones that graced those car magazines at the turn of the century. Hell, it might have literally been one of those cars had it been sentenced to the gantlet of Honda’s press fleet rather than a pampered life inside the company’s HQ museum. There are only 1,178 miles on the odometer, which is less than what the vast majority of new cars we test at Autoblog have. In fact, it has precisely 2,836 fewer miles than the 2020 Honda Civic Si that’s also parked out front. This isn’t a comparison, though. The ’20 is here for some historical context and to provide one last chance to enjoy the current-generation Si and the coupe in general before they sail into the sunset for good.

Opening my garage door feels like peering through time. The Si’s paint gleams, the interior is flawless, the wheels are without blemish … it’s in the same condition as any of those new press cars that pass through. Yet, it’s also obviously old, and unlike other flawless old cars, this one was affordable and hardly an exotic when new.

Opening the Si’s tinny door only deepens the time portal vibe. There’s the standard Honda steering wheel of the time with its horn buttons, spokes annoyingly lower than 3 and 9, and a diameter that’s a half-inch wider than the 2020’s. At least the Si’s is wrapped in leather. Turning the skinny key engages a shrill beeeep instantly familiar to Honda vets of the time, and should you then open the door, there’s the equally telltale beep-beep-beep-beep / beep-beep-beep-beep.

To the left of the wheel is Honda’s ubiquitous drop-down plastic coin bin, the cruise control On button (the Set/Accel and Resume/Decel buttons are on the wheel itself) and of course, the sunroof controls, in the head-scratching location Honda/Acura would keep them until deep into the 2000s. The headrests have holes in them, which was special to the Si in the Civic lineup, but common elsewhere in the Honda family. The multi-color upholstery and amber-illuminated gauges are really the only Si-specific design flourishes (outside, a mesh grille insert, front spoiler, enlarged sills and badging differentiate what was a freshened look for every ’99 Civic).

Once under way, it’s hard to imagine not being initially underwhelmed by the Civic Si, and I suspect the same was the case 20 years ago. The hydraulic rack-and-pinion steering is slow, numb on center, and the turn-in lacks precision. The engine has that sweet mechanical Honda zing, but acceleration around town feels quite slow. Having a mere 111 pound-feet of torque at 7,000 rpm tends to do that. It’s also quite noisy – from the wind, the road and the engine – which is actually a shame since the six-speaker stereo sounds surprisingly good playing my circa ’99 CD collection. 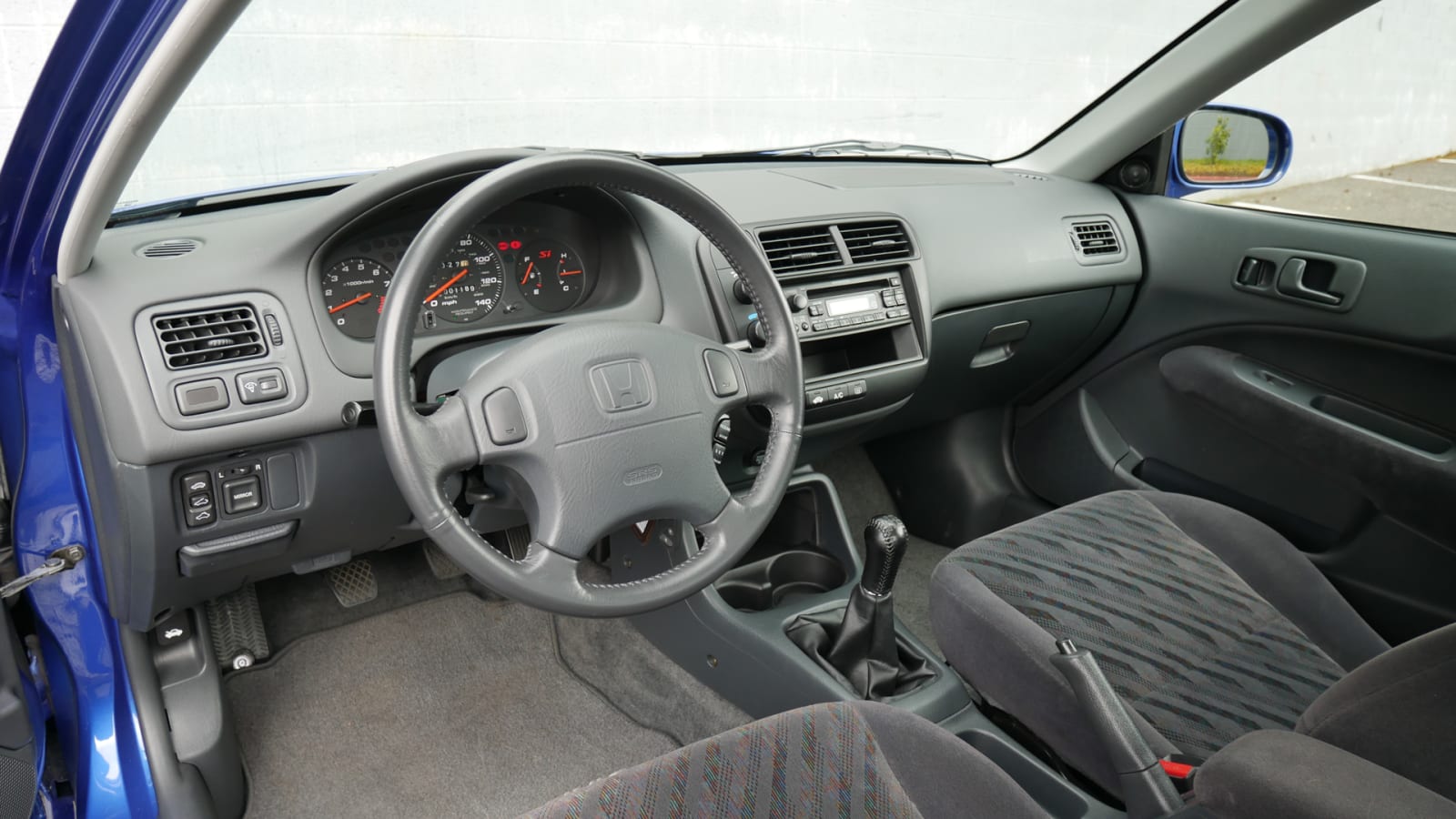 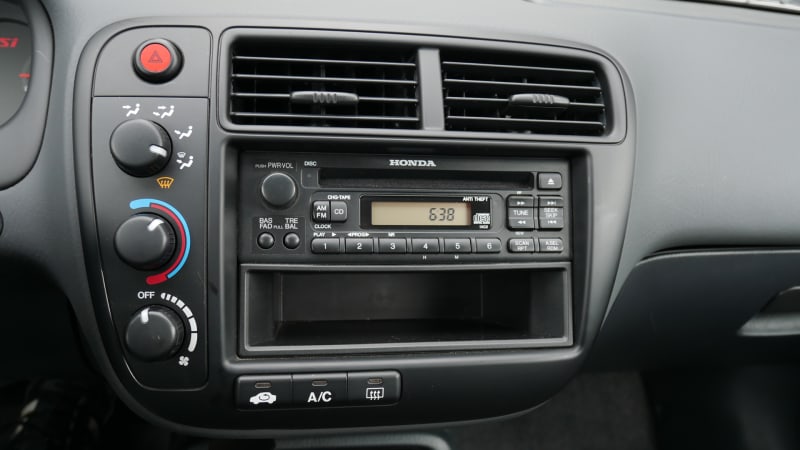 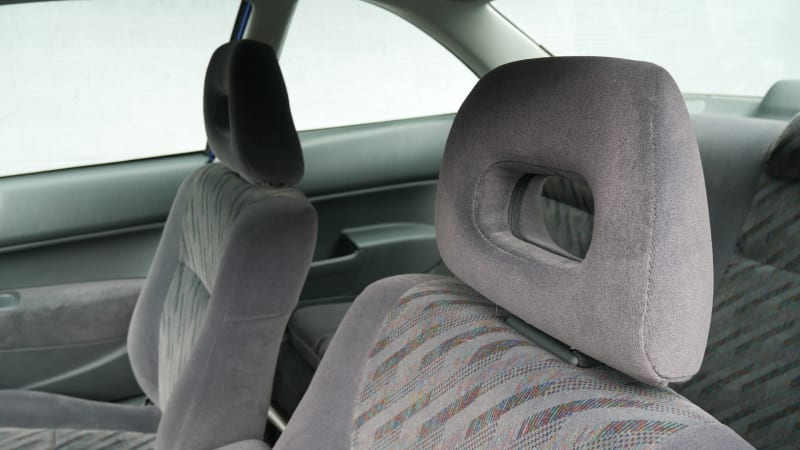 Soon, though, the city disappears. I point the Civic Si into the winding forest roads that spaghetti their way through the Clatsop State Forest between Portland and Astoria. It’s now where it’s actually worth noting what made the Si an Si.

A thicker anti-roll bar was fitted up front while an anti-roll bar, period, was installed at the rear. To further increase rigidity, a strut tower brace was also added. The springs were stiffened by 25% over the Civic EX, while the addition of progressive rate shocks with increased damping rates. Yet, the Civic’s basic chassis goodness carried over: the impressive (and soon-to-be-forever-missed) double-wishbone front suspension that helps this 20-year-old car ride and handle with a composure and sophistication that belies its age. OK, so there’s plenty of body roll, and the utter lack of lateral support from the seats sure don’t help the high seas feel relative the 2020 Si.

As speeds rise and corners start sawing back and forth, the Si feels light and playful. Your heels feel like they’re resting on the front axle. What it gives away in grip and ultimate speed to the modern Si – literally having wheels the size of its own steering wheel can only do so much – it counters with a joyful friskiness. It’s the difference between carving corners like Apolo Anton Ohno and gallivanting through them like Scott Hamilton.

The steering also gets better. There’s more feedback transferred through the wheel as speeds rise and you get past the initial turn-in – which thankfully happens frequently through successive sharp corners. The firm, reassuring brake pedal helps there as well, feeling appropriate for a performance-oriented car. The Si was actually the only Civic at the time with four-wheel discs, but ABS was exclusively an option for the drum-packing EX trim level. I stand by my 16-year-old self’s assertion that that was ridiculous. 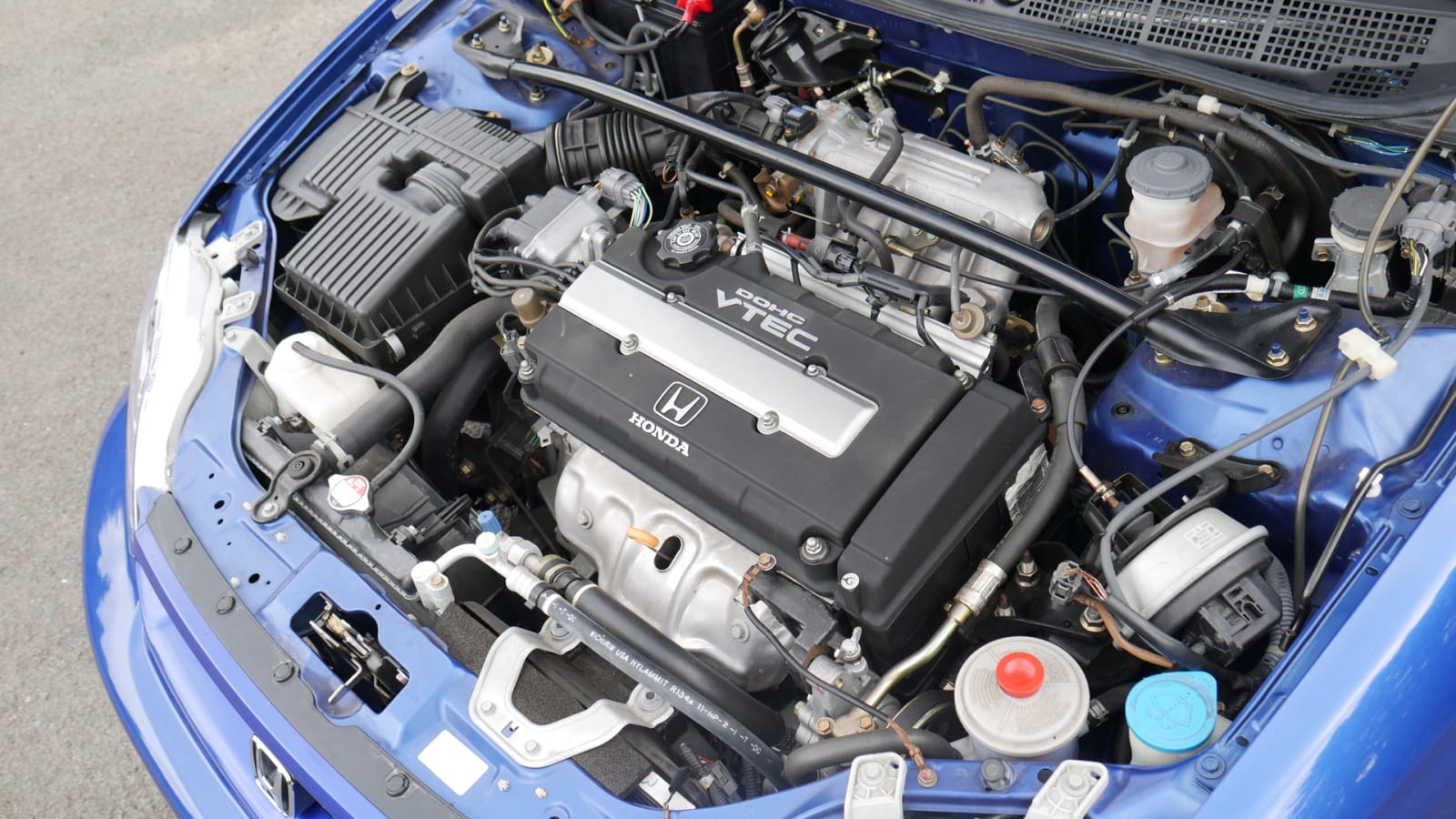 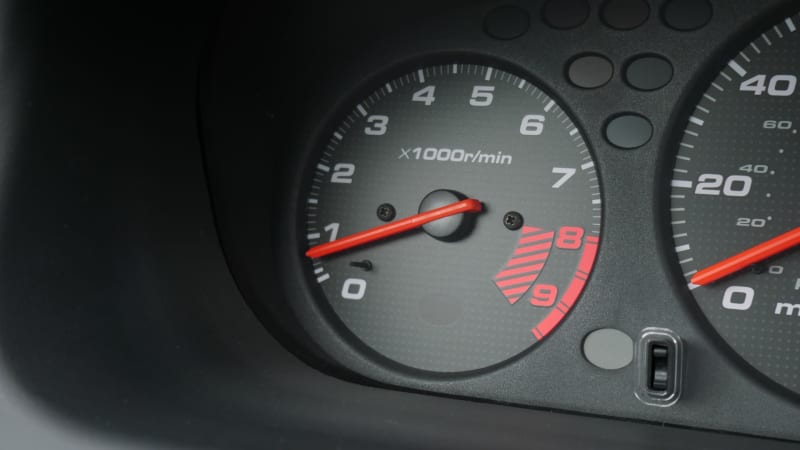 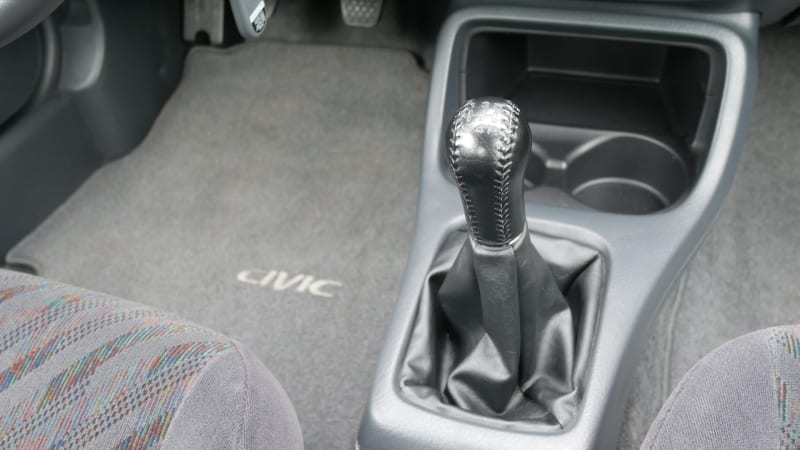 Of course, what truly made the Civic Si a legend is what’s under the hood. Its 1.6 liters and 160 horsepower may seem as underwhelming today as it did to my 16-year-old self, but look closer. That displacement and output works out to 100 horsepower per liter, which is no big deal in today’s turbocharged world, but is nevertheless genuinely impressive for a naturally aspirated mill.

Compared to the regular Civic’s 1.6-liter SOHC inline-four, the Si’s 1.6-liter DOHC unit had a slightly higher displacement, a larger bore and shorter stroke (nearly neutral at 81.0 x 77.4 mm), a larger throttle body, upgraded pistons, numerous strengthened components and the benefit of a generally enlarged exhaust system. The big-ticket item, however, was of course VTEC, the variable valve timing and lift control system that essentially allows the engine to utilize two cam profiles: one that lets it run smoothly and efficiently at low rpm (you know, where it felt totally unremarkable at the beginning of my drive), and then one with greater valve lift that lets the engine zing to the 8,000-rpm redline, produce those 160 horsepower and go from 0-60 mph in 7.2 seconds (according to Car and Driver at the time).

That all reads as impressive, but for the uninitiated, you really have to experience it to fully appreciate how genuinely different a VTEC engine is. When accelerating, everything about the noise, vibration and, hell, even the tachometer will tell you to shift at around 6,000 rpm. You can’t, there’s still another 2,000 rpm to go. Around town, if you try this, you’ll seem like a complete fool who doesn’t know his transmission has other gears. In the mountains, keeping it north of 6,000 rpm is the key to unlocking the Si at its greatest and most involving. It’s only here where the engine’s mechanical concerto can be heard. It’s only here where the engine feels like it actually has guts. And, importantly, it’s here where the Civic Si starts to cement the case for itself as a performance car worthy of praise back then and legend status today.

Now, the peaky nature of the engine means you have to be extra diligent about keeping it in its sweet spot, or else risk lulling it back into Dr. Jekyl. You can’t just shrug and let the turbocharged torque of the 2020 make up for your mistake. Thankfully, it also means you get to play with the five-speed manual transmission more, a masterpiece of ease and precision that benefits from a sharp throttle response that makes the 2020’s feel mushy and anesthetized. Having pedals that are actually close enough to heal-toe downshift sure helps as well. To my surprise, the ’99 is an easier car to drive smoothly than all of its successors.

There is one downside to the gearbox, however. The gearing is such that the engine is spinning at 3,000 rpm in fifth gear when going only 55 mph. It’s up to 4,000 past 65 mph and well past the point you’ve wished Honda had added a sixth gear. Then again, the S2000 had that many and still felt like it needed another when cruising on the highway.

The turbocharged 2020 Civic Si, by contrast, quietly chugs along at speed and perpetually benefits from its comparative black hole of torque (191 lb-ft at 2,100-5,000 rpm vs 111 lb-ft at 7,000). However, this isn’t a comparison test, and I won’t be an old man yelling at a cloud that the 21-year-old car is better than the new one. There is something to be said for the better visibility, simpler interior controls and a driver seat with eight ways of adjustment rather than six, but come on now.

No, the point here is to explain the 1999 Civic Si to a younger generation – even if it’s myself 21 years ago. Indeed, its appeal was not and is not obvious. The 2020 Civic Si may be considered a sleeper car, but the 1999 one is practically Rip Van Winkle. Not only do you have to know what the Electron Blue paint and VTEC sticker signify to recognize it’s not your grandma’s Civic coupe, but as I discovered, you really have to drive it to appreciate what the letters Si bring to the table. And not just around-the-block-from-the-dealer drive it. Drive it. Like you have 10 minutes to save the world or you’re a 16-year-old who’s just been given the keys to a brand-new Civic Si. Who knows whether I would’ve gotten it if given that chance back in 1999, but I certainly get it now.