In the late 1990s, Fiat set out to prove cheap and eco-friendly weren’t mutually exclusive. It argued a car could be both with an innovative, opinion-cleaving concept named Ecobasic built to preview the econobox of the future.

Fiat quietly presented the Ecobasic at the 1999 edition of the Bologna auto show, which was still a big deal 21 years ago, and it displayed it again at the following year’s Geneva show. Its high-top Converse-shaped silhouette turned heads everywhere it went, and that was only the beginning. Looking closer revealed its front end received a transparent panel that let users add oil, coolant, wiper fluid, or give the battery a jump. Audi adopted a similar solution for its A2. It had one door on the driver’s side, two on the passenger’s side, and a transparent hatch underlined by a pair of horizontal lights. It stretched 137.7 inches long, 67.3 inches wide, and 57.8 inches tall, dimensions that made it about two inches taller, three inches wider, and an inch lower than a modern-day 500.

Keeping manufacturing costs in check was a priority, so Fiat used plastic body panels dyed with color during the production process and mounted them to a steel structure, a configuration not unlike the Smart ForTwo’s. They were designed to be recycled at the end of the car’s life cycle. Inside, the passengers were treated to a marvelous exercise in simple, back-to-the-basics design. The driver sat in front of a four-spoke steering wheel, while a speedometer and a fuel gauge were integrated into a pod that sprouted from the center of the dashboard. The automatic transmission’s gear selector, a handful of buttons, and the HVAC controls were aligned below it.

The domed, bolted-down hood covered a 1.2-liter four-cylinder turbodiesel developed specifically for the Ecobasic. It showcased Fiat’s Multijet common-rail technology, which promised improve fuel economy without compromising power. On paper, that’s exactly what it achieved. The four developed 61 horsepower at 3,500 rpm and 118 pound-feet of torque at 1,800 rpm, which were reasonably respectable figures for an Italian city car made in the late 1990s, and it returned nearly 80 miles per gallon. Fiat quoted a 13-second 0-62-mph time. 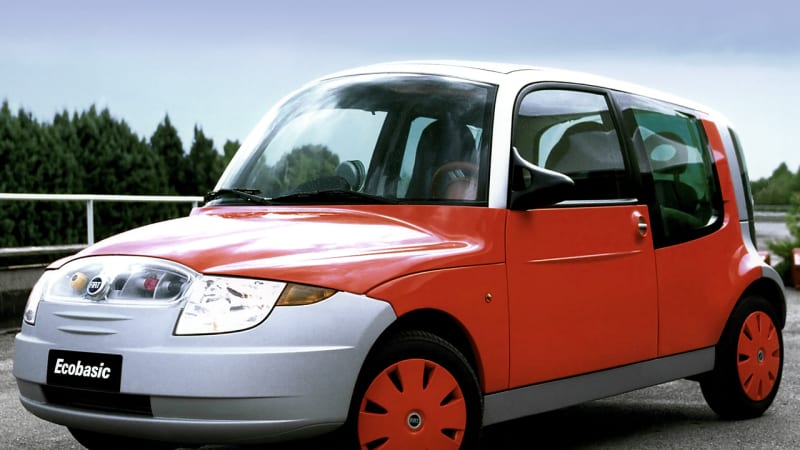 The company apparently did not blush when it hinted it could build 200,000 units of the Ecobasic annually and sell each one for approximately 5,000 euros, a price which would have made it one of the cheapest new cars sold in Europe. Executives backpedaled, the Ecobasic remained at the concept stage, but some of its innovations reached production. It cost five million euros to develop, so it’d have been a shame to consign it to the attic.

Taking advantage of its short-lived tie-up with General Motors, Fiat fine-tuned the prototype’s Multijet technology and fitted it to a 1.3-liter turbodiesel that, in an odd twist of fate, made its debut in the 2003 Opel Eco Speedster concept. It reached production the following year under the hood of the face-lifted Punto (a Ford Fiesta-sized hatchback) and spread across the company’s range during the 2000s. General Motors used it, too.

The overall design ultimately didn’t progress beyond the drawing board. Credible rumors claimed it would influence the second-generation Panda finally due out in the early 2000s and the Seicento’s successor expected to arrive at about the same time. The former shared no more than a very vague, passing resemblance with the Ecobasic, for better or worse. The second project was delayed, and the Seicento’s successor didn’t arrive until 2007. It looked nothing like the Ecobasic; it was the modern-day 500 still sold across Europe in 2020.